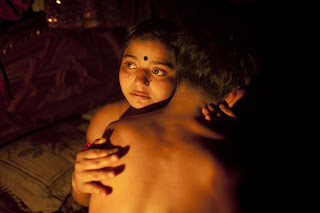 Seventeen-year-old prostitute Hashi embraces a Babu, her "husband", inside her small room at Kandapara brothel in Tangail, a northeastern city of Bangladesh. Many young and inexperienced prostitutes have "lovers" or "husbands" who normally live outside the brothel, occasionally taking money and sex from them in exchange for security in this male dominated society. She earns about 800-1000 taka daily ($9.75 - $12.19) servicing around 15-20 customers every day. Hashi is one of hundreds of mostly teenage sex workers living a painful life of exploitation in the brothel.
(Reuters / Andrew Biraj)

There is no shortage of men looking for "company" in Kandapara slum, a labyrinth of tiny lanes - lined cheek-by-jowl with corrugated iron shacks - a few hours drive northeast of Bangladesh's capital, Dhaka.

But with rates as low as 50 taka (60 U.S. cents), the need to attract as many customers as possible is desperate - prompting a rising, yet dangerous, trend of steroid abuse among adolescent sex workers to "enhance" their appearance.

"There is a huge difference between my appearance now and the malnourished look of my childhood," says Hashi, 17, who was lured into the sex trade by a trafficker when she was 10 and sold to Kandapara's brothel, where she began taking steroids.

"I am healthier than before and fit to serve a lot of customers in a day. Sometimes up to 15," she says, placing a large black bindi, or dot used by Hindu women, between her perfectly shaped eyebrows.

She sits in her tiny room with a bed, a cooking stove and posters of Bollywood stars taped across the wall.

Hashi is one of around 900 sex workers - some as young as 12 - living a painful life of exploitation in Kandapara, not only bonded by debt and fear of stigma, but compelled to take the steroid, Oradexon, which brings more income but leaves dangerous side effects.

Also known as Dexamethasone, Oradexon treats inflammation and allergies in humans and is used by farmers to fatten livestock.

Charities say the over-the-counter drug is taken by 90 percent of sex workers in Kandapara and the other 14 l egalised brothels across this impoverished South Asian nation.

The girls are first forced to take it by their madams, or "sardarnis", who run the brothels.

It increases their appetite, making them gain weight rapidly and giving the appearance that these poorly nourished teens are in fact healthy and older - attracting clients who prefer girls with "curves".

It also helps sardarnis keep the police away. The legal age for sex work in Bangladesh is 18.

The girls then continue to consume it, saying that it keeps them "strong and healthy", which in turn will help them get more clients in a day so they can earn enough to survive.

"My sardarni forced me to take a tablet. She beat me up and stopped giving food. She threatened me and reminded me about my loans," says Hashi, who has a four-year-old son staying with relatives, whom she has not seen for two years.

"In this brothel, customers always look for healthy girls. I take Oradexon. I need customers so I can pay my bills and loans. If I don't get any customers one day, I cannot eat in the next day. I wish to save some money for my son."

The story is the same with most of Kandapara's teenage sex workers, or "chukris".

Sold for as little as 20,000 taka ($245) by their poor, rural families to traffickers, they are then traded on to brothel sardarnis, who are former prostitutes themselves and keep the teenagers in bonded sex work.

The girls speak of being with up to 15 men in one day, but say their earnings are pocketed by their sardarnis, who tell them they have to work to pay off the money paid for them.

Many girls have been in Kandapara's brothel for years, yet due to their illiteracy, they have no idea whether their debts have been cleared and what their rights are.

Others, who have been left by their sardanis because they are too old or not-profitable, are in principle free to leave but choose not to, fearful of the social exclusion they will face in the conservative, Muslim society outside of Kandapara.

Oradexon, they say, keeps them going, even though there are known risks associated with its long-term use.

The steroid can cause diabetes, high blood pressure, skin rashes and headaches and is highly addictive, according to social activists.

It also weakens the immune system and leaves patients more susceptible to illnesses. There have been reports of young sex workers dying from over-use of the drug.

The small white pill is easily available in Kandapara's slums. It is sold without prescription for 15 taka (18 U.S. cents) for a strip of 10 at the tea and cigarette stalls blaring Bangladeshi pop music that populate a maze of open-sewer lanes.

"Steroids are life-saving as well as life-destroying drugs which are used by sex workers in poor countries," said Shipra Gowshami, a lawyer and human rights activist w h o works with sex workers in brothels in the central Bangladeshi town of Faridpur.

"A lack of awareness, easy availability and malpractices of quacks are some of the prime causes of why these drugs are being abused," Gowshami said.

In 2010, ActionAid Bangladesh began a campaign to promote awareness of the drug among sex workers. But they say they are facing a long fight in persuading not only the brothels to stop using it but also authorities to regulate it.

"There have been attempts to raise awareness on the negative impact of the use of such medicine but brothel owners, madams and pimps are a long way from withdrawing such practices," said Farah Kabir, country director for ActionAid Bangladesh.

"We have an uphill battle, yet it can be won. There needs to be greater regulation in the sale of such drugs. Government and the state must play an active role."