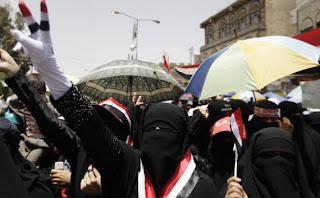 Ali Abdullah Saleh, the beleaguered president of Yemen, should have known better. Fighting for his political life (and perhaps for his physical life too), he played the woman card. After last Friday’s prayers, he tried to dampen down the escalating protests against his rule by admonishing women to stay home. He claimed that their presence in the streets, “mingling with men,” was against Islam. His ploy backfired. Within hours of his speech, text messages raced around the capital demanding a “women’s march” as a rebuttal. The following day, 10,000 abaya-clad women, almost all wearing the face-covering niqab, marched in protest. Many of the women had never before participated in any political activities. They were there to avenge the honor of all Yemeni women. As one woman shouted into a microphone, “If Saleh read the Quran, he wouldn’t have made this accusation.”

Perhaps if he knew his history better, he would have avoided kicking this hornet’s nest altogether. Throughout the 20th century, women played an important role in revolutions and wars of independence across the Islamic world. Muhammad Ali Jinnah, the founder of modern Pakistan, well understood the critical role that women could play in the independence movement – as actors and as symbols. He purposefully addressed women’s gatherings and encouraged their participation in meetings and street demonstrations. The women’s wing of Jinnah’s Muslim League – comprised mostly of wives, daughters and sisters of prominent Muslim League men – proved crucial in getting Muslim women out of their homes for the first time to advocate for an independent Pakistan. Although conservative Islamic leaders condemned these actions on the part of women, the Muslim League defended women’s mobilization as a religious duty. Women’s mobilization, even in the conservative North-West Frontier Province, was so successful that the British governor, upon seeing the mass of burqa-clad women in the streets, supposedly exclaimed, “Pakistan is made.”

Ayatollah Khomeini was also a master of mobilizing women. One of the turning points of the Iranian Revolution occurred on September 8, 1978, a day that is remembered in Iran as Black Friday. A number of revolutionary groups planned a large demonstration in Jaleh Square in downtown Tehran. By early morning, thousands of people from across the Iranian political spectrum–from Khomeini’s Islamist supporters to intellectuals to Communists–had gathered. Among them was a sizeable group of women covered from head to toe in their dark chadors. These revolutionary “sisters,” as they came to be known, heeded Ayatollah Khomeini’s calls to leave the confines of their homes to support the protesters–an act previously considered blasphemous in traditional homes, but now legitimized by Khomeini.

As the demonstration progressed, the Shah’s troops closed in on the square. Suddenly, the security forces began firing indiscriminately on the crowd. Hundreds were killed and many more wounded. The Black Friday Massacre was the first time the Shah had used such a heavy hand in stopping a public protest. The fact that women were among the casualties inflamed public opinion. For many protesters, the Shah irrevocably crossed the red line on that Friday.

In some ways, it seems Saleh’s cynical comments about women (he is hardly known for his piety) crossed a red line for Yemenis. Women are now more engaged than ever in Yemen’s struggle for a better government. When I was in Yemen in January, I spent a day with Tawakul Karman, one of the most vocal and active leaders of Yemen’s youth movement who has been leading student demonstrations against Saleh’s corrupt rule for two years now. Karman, a young mother of three and a member of the Islamic Islah party, has developed a high profile in Yemeni opposition politics. Her name has been bandied about as a possible presidential candidate to succeed Saleh. A female president is unlikely in a country that suffers from some of the worst gender statistics in the world. Then again, so does Pakistan, which has elected a woman leader twice – albeit the same woman.

Saleh, who has lost the backing of both the Saudis and the United States, seems to be in the process of trying to negotiate a handover of power. Women have made it clear that they are determined to be part of Yemen’s transition. Undoubtedly, conservative forces will try to sideline women once the goal of overturning Saleh is achieved, much as they did in the Iranian revolution and in post-Independence Pakistan (and as some are trying to do in Egypt today). But Yemeni women, like Tawakul Karman, are not about to take a back seat.