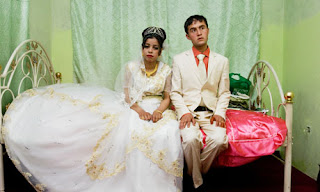 Comment: Never mind the unending poverty, inequality, squalor, orphans, widows and landmines lets legislate about clothes! Although I do agree that lavish weddings are unecessary and should be discouraged.


There's an awful lot of flesh on display at Qasre Aros in central Kabul. Arms and shoulders are free to the elements, while necklines plunge daringly low on garish ballgowns made of every shade of synthetic material imaginable and encrusted with fake jewels.

Though the skin may be the orangey plastic of the dozens of mannequins lining the walls, the dresses are worn every night by real Afghan brides. But the days when brides-to-be would flock to the shops of central Kabul's Shar-e-Now Park may be numbered. Conservative elements of Hamid Karzai's government are pushing for far-reaching restrictions on weddings the likes of which have not been seen since the Taliban regime.

Under a law proposed by the justice ministry and soon to be considered by Karzai's cabinet, "garments contrary to Islamic sharia" will be banned. Shops selling "outfits that are semi-naked, naked, transparent, or tight in a way that reveals part of the woman's body" will be fined and, if they persist, closed down.

When plans to regulate Afghanistan's booming wedding industry were announced earlier in the year, the government said it merely wanted to curb the country's mania for lavish weddings that drag people into serious debt.

But according to drafts of the law seen by the Guardian, the government is also aiming to introduce various public morality provisions in yet another sign of the casual erosion of the small freedoms women have won since 2001.

And in an echo of the Taliban regime, which used to police weddings to ensure they complied with hardline rulings including a ban on music, the government also intends to set up committees to monitor weddings.

The groups, which will include representatives of the religious affairs ministry, will be expected to patrol private ceremonies held in the garish, multistorey wedding halls on the edge of Kabul that light up the night with their neon facades.

Among their duties will be ensuring male and female guests do not mix in the same rooms – already a standard practice in most Afghan weddings – and that the bride is modestly attired.

Muhiuddin Alizada, the owner of Qasre Aros, looked bewildered when he was shown a copy of the draft law for the first time.

"This is pointless because the mullahs will not be happy unless the women are wearing burqas," he said. "It is all because of pressure from the Taliban."

Human rights activists are similarly aghast. "A number of experts who have looked at the draft law are of the view that it interferes with private family life and could well be inconsistent with sharia principles and the constitution," said Georgette Gagnon, the UN director of human rights in Afghanistan.

Other shopkeepers were more understanding, even though none of them had a single item of stock that was sharia compliant.

"We are Muslims and women should dress modestly," said Muhammad Shah. But moments later he concluded that there was no way such a law could be enforced. "Gambling is haram [forbidden by Islamic law] but the government can't even stop that."

Sadia, a 26-year-old who got married last week, was outraged by the idea that the government might try to stop her wearing the white, bare-shouldered creation she chose for her wedding.

"When I'm wearing this dress I feel very beautiful. Why shouldn't I wear it?" she told the Guardian during a four-hour session in a beauty parlour on the morning of her wedding.

"If I don't wear it people will think I have a very bad husband who says I cannot wear these things. This is a day I will remember all my life and every girl is hoping to wear these clothes."

Under the proposed law, not only would she have to be more frumpily attired, she would also have to go for something far cheaper. The government wants to impose a maximum spend on wedding dresses of just over £60.

Alizada says his cheapest frock is £137, a dowdy thing that has been used more than four times. Most brides rent their dresses, paying anything between £125 and £250. If they buy they have to pay more than £600.

The law also bans large parties in wedding halls to celebrate the many other ceremonies associated with an Afghan wedding. Guests will be limited to 300 and selections of food will be regulated by local government officials to ensure no more than about £3 is spent per person.