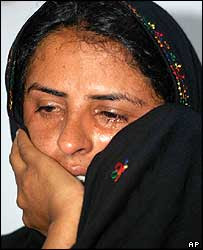 Shame on the unjust courts of Pakistan!

I am at a loss of words today. No words can describe the dejection, pain and anguish that many of us felt on hearing the Supreme Court’s verdict on Mukhtar Mai’s case. After nine arduous years of waiting for justice, five out of six accused in Mai’s rape have been acquitted. It was the Supreme Court that took suo moto notice on the LHC’s decision and now its decision to uphold the initial verdict is extremely disappointing to say the least.

Here is a time line of important events in Mukhtar Mai’s case to understand the complexities caused by procedural delay.

The detailed verdict can be found here. [For a more detailed time-line, refer to BBC’s report on Mai’s case]

June 22, 2002: Mukhtar Mai, 30, from Meerawala village in southern Punjab, is ganged-raped on the orders of a local jirga. The jirga is convened to seek punishment for Mai’s 12-year-old brother, Shakoor, accused of adultery with a woman from the Mastoi clan. Mai insists her brother is innocent and the charges are fabricated to prevent Mai’s family from filing a case against the men of the Mastoi who sodomised her brother.

Meanwhile, Mai’s brother is arrested by the police on charges of adultery as alleged by the Mastoi. The Mastoi rejects the jirga’s initial decision of Shakoor marrying the girl he is accused of having adultery with. Instead an appeal to settle scores by Qisas, ‘eye for an eye’ is demanded. Mukhara appears in front of the jirga, is gang-raped by six men in front onlookers and made to parade naked on the streets. The Mastoi clan then informs the police that both parties have agreed upon a deal and Shakoor is released.

Note: The role of the police here reflects how influential parties have control over criminal investigations. Police officials did not bother with details of the settlement and despite evidence of sodomy, Shakoor was still taken under custody.

June 28, 2002: Maulana Abdul Razzaq, an imam of the village mosque, protests the decision of the jirga and Mai’s rape. Maulana Razzaq urges the villagers to report the matter, declaring it a grievous sin and a crime. He then proceeds to inform a local journalist, Murad Abbass, who first reported the case in a local newspaper. The imam convinces Mai’s family to report the case. The case is filed on June 30, 2002. Meanwhile media attention builds pressure and the Punjab Government demands the police to take immediate action. Within two days the case is registered.

Note: One of the most crucial aspects of Mukhtar Mai’s case is the role of the village cleric in mobilising people to take action, reporting the matter to a journalist and urging Mai’s family to take action. As we protest role of some religious political parties in hindering women rights, we must acknowledge men like Maulana Abdul Razzaq in bringing Mai’s case to the forefront.

The initial report: The initial report filed in Mai’s case alleges 14 men of being involved in the gang rape. Charges are filed under the provisions of Pakistan Penal Code (provisions 109/149) of 1868, the Anti-Terrorism Act (7c & 21-1) of 1997 and the Offence of Zina (Enforcement of Hadd) Ordinance (10-4 and 11) of 1979. Using these provisions, Mai’s lawyers argue that the crime of rape should be extended to everyone present at the time of Mai’s rape, abetting the crime. By this provision, four of the fourteen are charged with rape and the rest for the act of commission or omission.

August 31, 2002: Court sentences six of the fourteen men to death, under the anti-terrorism provision. Four are sentenced while the remaining eight are released. An appeal is filed in the Lahore High Court against the release of the eight men.

March 3, 2005: The Lahore High Court, Multan Bench, reverses the trial court’s decision. It acquits five out of the six and reverses the death penalty for the sixth man, to life imprisonment. “Lack of evidence” was cited as the reason for the reversal

Note: The chemical analysis report clearly reports two semen stains, which means irrefutable evidence against at least two of the four charged with rape. Another reason provided is poor investigations, for which no one but our flawed system of justice is to be blamed.

The decision of the LHC was met with hue and cry by human rights organisations demanding the state to intervene.

The Federal Shariat Court intervenes and suspends the LHC verdict.

As pointed out by Ali Dayaan Hassan, the jurisdiction dilemma further delayed the case.
The Supreme Court then decided to take suo moto action against LHC’s decision and hear the final appeal. All fourteen men alleged in the initial report by Mai were re-arrested.

June 28, 2005: Acquittals of the five men initially convicted by the trial court stands while that for eight others, is held until retrial.

April 21, 2011: Upholding the Lahore High Court’s verdict, the Supreme Court’s three-judge bench acquitted five out of six suspects in the Mukhtar Mai’s case. The remaining eight have also been released.

In short, only one of the fourteen identified by Mai as her rapists has been charged. It is worth recalling the adage: justice delayed is justice denied. After nine years of court trials, numerous appeals and a plethora of threats on her life, Mai has been let down by the justice system. In a society where crimes pertaining to women are repeatedly snubbed, Mai evolved as symbol of courage and defiance. Her resolve has inspired women in Pakistan to keep fighting the struggle against societal chauvinism and patriarchy. Mai used financial help to set up schools, ambulance services and shelters for women in her village. It is remarkable for a woman to stand against adversity with such grace and composure.

As I said earlier, I have no words to express how I feel about the court’s decision. I am not a legal expert and therefore, do not have the authority to comment on the details of the verdict. All I know is that I am a citizen of this country, I believe in upholding the rule of law and respecting the court’s decision. But I am also a woman, and so I am aware of the role of societal pressure and culture in controlling the way our investigations are carried out and laws are implemented. I am also aware of the intensity of prejudice with which cases pertaining to women are handled, if at all reported.

I want to appeal to each one of you to please consider the long-term implications of this decision and let this be an eye-opener to the flaws within our system. It is easier to blame the judges and give a name to our protest and anger, but much more difficult to look within and pinpoint where things went wrong. Without demanding a change in the way these cases are perceived, reported, investigated and handled, the viscous cycle of prejudice against rape will never be broken. It will be an arduous battle from here on but I will take strength from the epitome of courage herself – Mukhtar Mai.

As a recent message on the Twitter account in her name read: “No court can weaken my resolve to stand against injustice.”