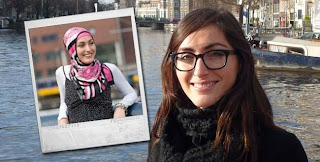 Comment: I find these sorts of articles and especially pictures of before and after and voyeuristic obsession with seeing the hair of the sisters...slightly creepy.

For centuries, Islamic scholars have said that Muslim women must cover their hair. But many Muslim women don't.

There are about 1 million Muslim women in America; 43 percent of them wear headscarves all the time, according to the Pew Research Center. About 48 percent — or half a million women — don't cover their hair, the survey found.

The split between women who've covered and women who've never done so has existed for decades. But now a generation of women is taking off the headscarf, or hijab.

Although the scarf is a public, sometimes even political symbol, women say the choice to unveil is highly private, emotional and religious.

Rasmieyh Abdelnabi, 27, grew up attending an Islamic school in Bridgeview, Ill., a tiny Arab enclave on Chicago's southwest side. It's a place where most Muslim women wear the hijab.

For 14 years, Abdelnabi was one of them. But after she graduated from college, she took off her hijab. Now, she has sideswept bangs, the kind that hide part of her face. She's quiet, reflective and sometimes shy.

"When you put the scarf on, you have to understand that you are representing a community," Abdelnabi says. "And that is huge. That's a huge responsibility. And I don't know if it's for everyone."

Talking over falafel at her favorite restaurant, Abdelnabi explains why she stopped wearing the hijab.

She says that Islam teaches modesty — but wearing the hijab is taking it a step too far.

"I've done my research, and I don't feel its foundation is from Islam," she says. "I think it comes from Arab culture."

The headscarf can be a divisive issue among Muslims.

Abdelnabi describes the response some people have to that idea: "It's like, 'How dare you question God's will. How dare you?' " she says.

And in a tight-knit Muslim community like Bridgeview, Abdlenabi worries about offending fellow Muslims with her opinions — so during most discussions about hijab, she tends to keep silent.

Looking For A Change

Another woman in Bridgeview, Leen Jaber, 29, says that a few years ago, she also decided to unveil.

Jaber says she wore the scarf for 12 years. But as her marriage started to fall apart, she took it off.

"I was going through a lot of difficult things. Perhaps I thought taking it off would just be one less thing to worry about," she says.

"I never took it off saying, like, it was the right decision. I just took it off because I wanted to do it. I wanted to see if my life would be different — if I would feel any better about the problems that I was going through."

But Jaber's problems didn't go away — in fact, they got worse. She lost her job, got divorced and moved in with her parents. That got her thinking more about God, and spirituality. One year and eight months later, Jaber put the scarf back on.

"It was a very different process than I had gone through when I was 14," she says. "When I was 14, it was like well, everybody's wearing it."

Jaber is outgoing and chatty. She writes poetry, blogs and dreams of the day she'll be on American Idol.

She says it's easy for some women to feel like the headscarf strips them of their individuality and turns them into a spokeswoman for the faith.

To avoid that, Jaber says, she is making sure other parts of her personality — like her singing — shine through.

The terrorist attacks of Sept. 11, 2001, are a persistent theme in conversations about how to approach a Muslim tradition in modern America.

For some women, that tragedy had absolutely no effect on their decision to uncover. But for others, it was huge. They spoke of two distinct phases in their hijab life: pre-Sept.11 and post-Sept. 11.

Some of them said the terrorist attacks initially strengthened their desire to wear the hijab. They became diplomats for Islam; they said they wanted to represent a positive Muslim image, to counter that of al-Qaida.

But in the years that followed, that fervor waned, as anti-Muslim zeal grew.

And for some women, the scarf became a heavy burden to carry — one that affected the way strangers perceived them, the way colleagues treated them, and even the way fellow Muslims expected them to behave.

For others, the decision to remove their headscarf simply came down to a choice, as they grew older.

Shoeb, now 31, reads from a journal she kept back then:

"Never could I have imagined when I put it on, that five years later, on a day just as random as the day I put it on, I would take it off."

"That feeling is like, 'I am going out without a shirt on' — that sense of feeling exposed," Shoeb says.

"I had really long hair, and I actually tucked it into my sweater, because I was feeling so embarrassed that, 'Oh my God, I'm showing my hair — am I being immodest somehow?' "

"So that first day was quite difficult, just taking it off," Shoeb says, "even though I looked like every girl on the street."

Shoeb's decision was as much about religion as it was about her evolving feminine and American identity. She spent her childhood in Saudi Arabia, where she wore shorts.

After arriving in the United States as a teenager, she decided to cover, and eventually uncover, her hair. And Shoeb says she doesn't find that surprising.

"The religious landscape of America is one in which — it's a very deeply religious nation, but at the same time, it's so fluid," she says. "You know, people are born into one faith, and then they might still be Christian — but become of a different sect, or a different church."

The phenomenon of veiling and unveiling — and even re-veiling — is part of that same tradition, Shoeb says.

"We might think that this is something particular to Muslim-Americans," she says, "when in fact, that's the story of our religious landscape in America."

Shoeb has no intention of putting the scarf back on. But she also says she wouldn't be the person she is today if she had never worn it in the first place.