For some Latinos Islam is simple 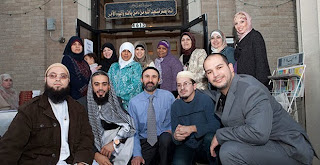 Milena is one of thousands of Latino Americans who has converted to Islam. She embraced the fast-growing religion four weeks ago. Milena has been married to her husband, who is originally a Pakistani-Muslim, for seven years. Despite their long marriage, she had always refused to convert just for her spouse’s sake.

Like many Puerto Ricans, she was a regular Catholic churchgoer with a strong faith. After her first son’s birth, she started to consider Islam.
“I became interested in learning about Islam without converting, because our son is going to be raised as a Muslim. That is how my interest in Islam started.” she said.

So far Milena has been satisfied with the learning process.
“I am seeking knowledge, I am hungry for knowledge. I am really excited about what I feel,” she said.
The new convert has adapted herself rapidly into her new life, so much so that the Imam and other students do not recognize her immediately.

For the first time, Milena wore a veil covering up her hair.
“Last Sunday, I went to a hijab party," she said. "I didn’t know how to wear one. It was a really nice experience. And this is the first time, I am wearing it today.”

But she confesses “I was a bit reluctant because I didn’t know how anyone would react to me. But that was fine. I feel good. I feel proud.”
That night, four other Latino Muslims attended the Islamic class. Among them was Nylka Vargas, who has been a Muslim for 15 years.

Coming from a Peruvian-Ecuadorian family, she was born and raised in New Jersey. Nylka chose Islam because she said she "had a yearning to know God and I didn’t believe in things that I learned as a Christian. I believed in a higher power. I was looking for the truth, the connection between the believer and the Creator."

“Islam taught me a lot of discipline. And Islam is perfectly aligned: the prayers and its time. Why things are done. It is flexibility but discipline.”

According to a study led by Samantha Sanchez, one of the founders of Latino American Dawah Organization (LADO), the most attractive part of Islam to spirituality seeking Latinos is its strict monotheistic orientation and structured belief system.

“Because Latinos are coming from Catholic background, which is a fairly ordered world, to America where is completely free, sometimes they find an alternative in Islam, where they see an order," he said. "At the same time, because they are coming from a Catholic background, they also see some echoes in Islam of their own faith. For example, Catholics have a very high reverence for Mary, the mother of Jesus, so that is something they very much appreciate.”

Imam Shamsi Ali of the Islamic Cultural Center of New York says he has a similar point of view.

"The most important reason why many Latinos embrace Islam is because they are naturally religious people as Catholic or Christian, so they are more inclined to religion," he said. "That’s why they can turn to Islam.”

Without any census based on the religious beliefs in United States, it is difficult to give a precise figure of Latinos who have converted to Islam within the country.

Yet, it was estimated at about 200,000 in 2006, by the American Muslim Council. Young and educated women make up a large part of this group.

The tragic event seems to have aroused people’s interest in Islam, who want to understand what the religion is all about.

Such is the case for Mustafa, born to Catholic parents from Puerto Rican. Mustafa started to search for answers in the Qur’an after the attacks.

“Once I started to read the Qur’an the first time, I said this is true," he said. "I have to testify to it.”

But he explains that it was a long process that stretched from 2001 through 2007, before his conversion.

“I was still young, into partying," he said. "So it took me a transition from that time when I first read the Qur’an until I took my Shahaada (testimony of faith in the Oneness of God and the finality of the prophethood of Muhammad).”

Many Muslim organizations have stated that the Latino Muslim community has tripled or quadrupled since 9/11.

Ahmed explains that there has been “so much literature on Islam. If you are an American, and day and night people are saying Islam is bad, Islam is terrorism, so you may pick up a book on Islam and what do you see? No, Islam is saying something else. In that sense, the interest in Islam has gone up since 9/11.”

Conversion to Islam by Latinos may also be seen as a look back to their Spanish roots, which is embedded in Islamic history for 800 years in Granada, Cordova, Seville and Andalusia.

“There is a kind of reawakening," Nylka Vargas. "We want to discover our roots, our ancestries. How our culture fitted into Islam. It’s amazing, I have seen how our community has transformed.
There is more availability of Islamic information in Spanish. Islam is not so much seen as something foreign. That misconception is going away. Now it is our religion too. Islam is not for others only, it is for all. ”

The largest communities of Latino Muslims exist in areas, unsurprisingly, that have the highest concentrations of Latinos, such as New York City, Chicago, Los Angeles, Miami, and other urban centers. According to an ongoing survey led by LADO, California is the state with the most Latino Muslims.

In his essay, Latino Conversion to Islam, Khalil Salgado, currently the secretary of the League of Latin American Muslim Organizations, puts forward five factors that have lead Latinos to accept Islam.

From the 1960s until the mid-1990’s, Latino conversions seem to be the results of the interactions between Puerto Ricans and African-Americans, who were the first Muslims. From the mid-1990’s, the explosion of Internet has facilitated connections between people thus many Latinos have gotten connected to other people around the world including with Muslim people.

Another factor is that Latinos have been living among Muslim immigrants.

“In the post-9/11 period, most Latinos have come to learn about Islam primarily from their interactions with immigrant Muslims,” Salgado said.

The two remaining factors, which “are not restricted to any particular time period” are “the conversion in prison” and the “conversion through marriage.”

From Puerto Rican family, Salgado, a 33 year-old, is himself a converted Muslim. Born and raised in the Bronx, New York, he became Muslim in 1995.

He then went to Mecca and Riyadh, in Saudi Arabia where he attended Arabic and Islamic studies. He is now a teacher at the Islamic school in Nashville Tenn.

Like Salgado, Anthony Umar Navarro, an American-Puerto Rican with a Catholic background, also chose to go abroad to learn Arabic and Islamic studies.

He currently resides in Egypt with his wife. He says, he is trying “to learn how to live like the Prophet without all of the distractions that the "modern" era has brought with it.”

Umar confesses that before he became Muslim he "got into tons of troubles on the streets -fighting every day, being arrested by police. I really didn't care much about anything until I witnessed my best friend get murdered. Now that my best friend was gone I needed to know where he was.”

A short time later, he came across a Muslim Dominican who was also dealing with the streets and was befriended by the troubled youth, which led Umar to discover Islam.

“I took my Shahaadah two months before my 21st birthday and left the streets life alone“.
In embracing Islam, Latino Muslims change part of their life spiritually and physically.

“Before there was nothing to scare me, now I am scared of only thing and it is about Allah," he said." It changed my life. It makes me a fearful man. It makes me also patient. I had never had any kind of patience.”

Born in a Catholic Puerto Rican family, he explains that “the hardest part is watching what you eat. You have to be more aware of everything you do, aware what time is it for your prayers. But it is just a transition.”

For over two months, Ziyad has taken Qur’an and Arabic classes at the Islamic Cultural Center of New York to develop a better understanding of the religious texts. Gina* has also started attending the same class, after having embraced Islam over two months ago. She was born and raised in New York, with an ancestry from Panama and Dominican Republic. She has not told her parents about her conversion, but recently opened up to her sister, who she says “made a couple of comments and repeated what the media says. But when I started to explain to her certain things she understands it more now.”

Gina finds it regrettable that “there are a lot of misunderstandings that people have about Islam and they feel that it’s the truth because what they hear on television.”

The rise of Latinos who have converted to Islam in the United States might also have an impact beyond the American borders.

Ali tells this story: “In Nicaragua there was no mosque in the past, but recently a business woman from New York, who became Muslim, went back to Managua and she bought a house that she turned into a house of worship, a mosque. So there is some influence.”

*Gina, is a substitute name to perserve her anonymity.