A killing in Gaza that also carries a warning to Israel 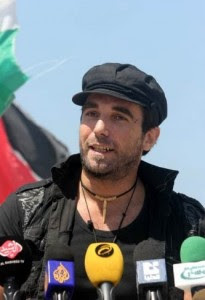 Comment: IslamAwareness strongly condemns the cowardly murder of this brave and wonderful human being by evil terrrorists who are utterly misguided. May Allah give punish them and give brother Vittorio justice, InshaAllah.


The kidnapping and killing of Vittorio Arrigoni in Gaza is exactly what the Italian foreign ministry statement said it was: "An act of vile and senseless violence."

Arrigoni was no novice; he had lived in Gaza for several years, working for the International Solidarity Movement, a group committed to non-violent resistance against Israel's occupation of Palestinian land. There was no reason for Palestinians to treat him as anything other than the sincerest of friends.

This is not the only inexplicable element in his fate. His captors appear to have been members of the Salafist movement, a group that regards Hamas as unduly moderate. Their declared purpose was to secure the release of their leader, who was detained by the Hamas authorities last month. But Arrigoni died several hours before the expiry of the deadline they had imposed, suggesting either that something went wrong from the start or that they quickly abandoned hope of attaining their objective.

The killing prompted grief in Gaza, but also despair. Not only was Arrigoni well known and well liked there, but it escaped no one that this kidnapping was the first since that of the BBC journalist Alan Johnson in 2007. The intervening four years – crudely interrupted by Operation Cast Lead, Israel's 2008 reinvasion of the territory – had seen Hamas gradually more able to impose order. Missile attacks on Israel had declined and kidnappings of foreigners had ceased. It must be feared that the death of Arrigoni signals a change. With missile attacks on Israel from Gaza also increasing in recent weeks, the relative calm is at risk of breaking down. Lawlessness, never far from the surface in Gaza, could be on its way back, with implications for the territory, for the Palestinian cause, for Israel, and for the, currently moribund, prospects of peace in the Middle East.

Two factors can be identified as fostering current tensions – one that can be addressed; the other harder to tame. The first is the continuing Israeli blockade, which has helped to create and now exacerbates tensions in Gaza. Loosening the blockade is the only way that the pressure inside the densely populated territory can be relieved. Allowing in more goods, including especially medical supplies and building materials, would bring a rapid improvement of conditions inside Gaza, with hospitals better able to function, more productive work, and an acceleration of reconstruction. It is unfortunate that Israel's automatic response to renewed violence in Gaza is to tighten the blockade, without apparently understanding that this invariably serves only to reinforce the malign trends.

The other factor is the spread of unrest across the wider region. With Egypt still in ferment, protests in Syria showing no sign of abating and a new Jordanian government only just holding the line, Gaza inhabits a deeply troubled neighbourhood. What is more, it shares many of those countries' most problematical features: a very young population, an acute lack of employment, and serious obstacles to political engagement. With so much turmoil gathering around, the very last thing Israel needs is chaos in Gaza. But it needs to recognise that it holds the keys to making that less likely in its own hands. Self-interest, as well as the benefit to Gaza, dictates that it should relax the blockade.