Mind the crack! (During prayer) 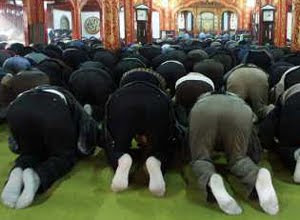 One of the most common topics of discussion among Muslim men and women (and ofcourse many non-Muslims too) is the dress code of Muslim women. We have videos on Youtube bemoaning sistes that observe hijab badly, or railing against those that do not far enough and dare to uncover their hair/faces. The Niqab ban in France will come into force presently and Non-Muslims like Yasmin Alibi-Brain give reasons why veils should be banned not understanding this is matter of faith and no Muslim gives two hoots what she thinks!

In my experience many brothers have very strong opinions on how sisters should dress and have no qualms about saying so publicly regardless of whether that may or may not be a good idea. They seem to think they are somehow responsible for every sister. But they really aren't, they should remember, that sister will have to answer for herself on Judgement day. As a man I would rather not tell a woman how to dress, its really none of my business. In fact I would rather not comment on anyones mode of dress, however recent observations at my mosque have forced me to comment on how my fellow brothers dress.


During friday prayers, I see the teenagers wearing nice trendy t-shirts and trousers. Since its getting hotter, there is no need for the jackerts or cardigans.

As we know that during the prayer, we need to go through this complete routine of postures, with 'sujood' being the main one. These young brothers when they go into 'sujood', they often expose their lower back and even shown butt-cleavage. If this was an odd incident then I can understand, but this is becoming more and more common. In fact sometimes I wonder if there is a competition on who can get away by exposing the most.

Its very easy to tell them off but this can discourage them from atttending prayers in the mosque. It is also difficult to tell them politely in the mosque as there are always some older brothers looking for an opportunity to publicly belittle and embarrass others.

Islamically, men have a similar strict code of dressing as a women. The mandatory covering is from the navel to the knee. So brothers, rather than focusing on the existant/non-existant, good/bad, hijab/abaya/niqab of sisters, please observe yourselves and ensure you are dressed suitably and modestly, especially for the mosque. I would rather not get an eyeful every Friday!
Posted by Zafar Khan at 10:00