Oppression from an Islamic Perspective 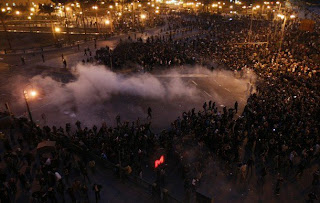 As-Salamu `Alaykum. I would like you to shed some light on the concept of oppression in Islam, for we need to expose hidden aspects of this issue for others to know who are the real oppressors. What are the forms of oppression from Islamic perspective?

In The Name of Allah, Most Gracious, Most Merciful.

Dear questioner, thank you very much for having confidence in us, and we hope our efforts, which are purely for Allah's Sake, meet your expectations.

First of all, we would like to stress the fact that all forms of oppression are condemned in Islam. It is high time that broad-minded Muslims and non-Muslims understand this fact, which is highlighted in the following:

"Contrary to the common misconception that Islam is an oppressive religion, Islam explicitly forbids all forms of oppression.

Hisham Ibn Al-Hakim Ibn Hazim happened to pass by some people, the farmers of Syria, who had been made to stand in the sun. He asked: What is the matter with them? They said: They have been detained for (not paying) the Jizyah (tax on non-Muslims in an Islamic state). Thereupon, Hisham said: I testify that I heard Allah's Messenger, peace and blessings be upon him, saying: “Allah would torment those who torment people in the world.” (Reported by Muslim)

Jabir Ibn `Abdullah, may Allah be pleased with him, quoted the Prophet, peace and blessings be upon him, as saying: “Be on your guard against committing oppression, for oppression is a darkness on the Day of Resurrection...” ( Reported by Muslim)

It is also reported that Prophet Dawud, peace and blessings be upon him, said: “O Allah, You know that I love You and I love all those who love You, but how may I endear You to Your servants? Allah said: Remind them of My Favors, My trials and My anger. O Dawud, any of My servants who helped an oppressed person and stood by him in his oppressed state, I’ll keep his feet firm on the Day when all feet will be shaken.” (Reported by Al-Bayhaqi, Al-Ahadith Al-Qudsiyyah)

It is worth stressing here that Islam not only condems doing others oppression and justice, but it goes far to condemn oppression against one’s self. When the Messenger of Allah, peace and blessings be upon him, came back from the battle of Tabuk, he laid a greater emphasis on the Jihad against the soul or nafs.

One of the many shortcomings which has arisen in the West, is judging Islam by the conduct of a minority of its people. By doing this, segments of Western society have deliberately played off the desperate actions of many Muslims, and have given it the name of Islam. Such behaviour is clearly not objective and seeks to distort the reality of Islam. For if such a thing was logic (judging a religion by the conduct of its people) then we too could say that all Christianity is about is child molesting and homosexuality, whilst Hinduism was all about looting and breaking up mosques.

Generalising in such a manner is not seen as being objective, yet we find that the West is foremost in propagating this outlook on Islam. So what is the reality of Islam? How does one dispel the myths which have been created and spread so viciously?

Where is the Truth then?

The only way to examine Islam is to simply examine its belief system. Look at its sources, the Qur'an and the Sunnah, and see what they have to say. This is the way to find the truth about what Islam says about terror, terrorism and terrorists.

One who is sincerely searching for the truth, will do it no other way. The very name Islam comes from the Arabic root word 'salama' which means peace. Islam is a religion, which is based upon achieving peace through the submission to the will of Allah. Thus, by this very simple linguistic definition, one can ascertain as to what the nature of this religion is. If such a religion is based on the notion of peace, then how is it that so many acts done by its adherents are contrary to peace? The answer is simple. Such actions, if not sanctioned by the religion, have no place with it. They are not Islamic and should not be thought of as Islamic.

Anyone who knows the early history of Islam, will know that all those nations and empires which came under the fold of Islam were indeed previously oppressed. When the Companions of the Prophet Muhammad, peace and blessings be upon him, went out for the offensive Jihad against the Egyptians, the Persians and the Romans, we find that the people did not resist against them at all. Rather, they accepted Islam on such a scale, that it is inconceivable that the Jihad of Islam could be anything other than a liberation for these oppressed people; a liberation from centuries of tyranny.

In fact, with the Byzantine Egyptians and the people of Spain, the Muslims were even beckoned to come and liberate these lands from the oppression of their kings. This is the glorious track record of the Islamic Jihad.

Compare this with the brutal track record of warfare in the Western world over the centuries. From the crusades against the Muslims to the days of colonial warfare, the Western world has killed, destroyed and plundered everything, which has come in its way.

Even today this merciless killing goes on by the Western nations. While claiming to be about world peace and security, Western nations are ready to bomb innocent civilians at the drop of a hat. The classic example of this is the recent bombings of Afghanistan.

Without doubt this was the reason for such terror from the American military upon innocent people. This is the same American military which claims to enter the worlds trouble spots under the guise of being peace keepers. But "… when it is said to them; 'Make not mischief on the Earth', they say; 'We are only peace makers'. Indeed they are the ones who make mischief, but they perceive it not.” (Al-Baqarah 2:11-12)

The Role of the Media in Distorting the Islamic Image

By going through the teachings of Islam, it is clear that such a religion has only come to benefit mankind and not to destroy it. So why is there so much hatred for this noble religion in the West?

The answer is simple, the media. It is the Jewish influenced media of the West which has portrayed Islam to be something that it is not. A number of years ago, when the Oklahoma City bomb went off, a headline in one of the newspapers, 'Today', summed up this attitude. With a picture of a fire fighter holding a dead child in his arms, the headline read: "In The Name of Islam". Time has of course proven that this bigoted assumption was incorrect, as Timothy McVeigh, a right wing radical now faces the death penalty for the crime.

Likewise, the bombs which went off in the Paris metro in 1995, were also blamed on Muslim fanatics. It has now emerged that the Algerian secret service who having routinely bribed many European journalists and MPs, were actually behind it. The desire to throw a veil over Islam is immense by these people:

Allah Almigty says: “They intend to put out the light of Allah with their mouths, but Allah will complete His light even though the disbelievers hate (it).” (As-Saff: 8)

Whilst trying to destroy Islam through this instrument of the media, the Jews clearly try to portray an image of themselves as being the oppressed people. Every year, we are reminded as to how many Jews perished under the Nazis in World War II. We are made to feel sorry for these same people who have gone on to commit so many crimes upon the Palestinian people. Some may say that this is a racist and biased viewpoint.

But we say; If this media was not run and orchestrated by the Jews and was truly neutral, then why are Menachem Begin and Yitzhak Shamir, two former Israeli prime ministers, not held aloft as being terrorists? Anyone who knows about the history of the Palestinian occupation will tell you that these two men were members of the Stern Gang and Irgun, two notorious Jewish terror groups who killed many innocent people.

If this media was truly impartial, then why does it not tell about the extent of the Israeli bombardment and illegal occupation of Southern Lebanon and its people? And if this media really had nothing against the religion of Allah, then why does it not inform the people that every day hundreds are entering the religion of Islam? Such things will never be highlighted in the Western media, simply because to do so would be against their very interests."

The above quotation is excerpted with slight modifications from www.thetruereligion.org

It is clear from the above that Islam and true Muslims have nothing to do with oppression. The issue can’t be generalised as done by the Western media. A clear separating line between true Muslims and those who trade in the name of religion has to be drawn. Those who have a moderate view of Islam have a big role to shoulder. This role should be enhanced especially in the period ahead in order to quench the thirst of those non-Muslims who are eager to accept Islam as well as those Muslims whose vision about the true Islamic teachings are not clear.

If you have any further comments, please don't hesitate to write back!