Johann Hari: We all helped suppress the Egyptians. So how do we change? 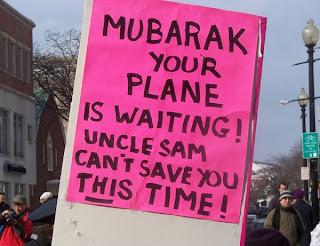 The old slogan from the 1960s has come true: the revolution has been televised. The world is watching the Bastille fall on 24/7 rolling news. An elderly thug is trying to buy and beat and tear-gas himself enough time to smuggle his family's estimated $25bn in loot out of the country, and to install a successor friendly to his interests. The Egyptian people – half of whom live on less than $2 a day – seem determined to prevent the pillage and not to wait until September to drive out a dictator dripping in blood and bad hair dye.

The great Czech dissident Vaclav Havel outlined the "as if" principle. He said people trapped under a dictatorship need to act "as if they are free". They need to act as if the dictator has no power over them. The Egyptians are trying – and however many of them Mubarak murders on his way out the door, the direction in which fear flows has been successfully reversed. The tyrant has become terrified of "his" people.

Of course, there is a danger that what follows will be worse. My family lived for a time under the torturing tyranny of the Shah of Iran, and cheered the revolution in 1979. Yet he was replaced by the even more vicious Ayatollahs. But this is not the only model, nor the most likely. Events in Egypt look more like the Indonesian revolution, where in 1998 a popular uprising toppled a US-backed tyrant after 32 years of oppression – and went on to build the largest and most plural democracy in the Muslim world.

But the discussion here in the West should focus on the factor we are responsible for and can influence – the role our governments have played in suppressing the Egyptian people. Your taxes have been used to arm, fund and fuel this dictatorship. You have unwittingly helped to keep these people down. The tear-gas canisters fired at pro-democracy protesters have "Made in America" stamped on them, with British machine guns and grenade launchers held in the background.

The former Labour MP Lorna Fitzsimons spoke at a conference for Israel's leaders last year and assured them they didn't have to worry about the British people's growing opposition to their policies because "public opinion does not influence foreign policy in Britain. Foreign policy is an elite issue". This is repellent but right. It is formulated in the interests of big business and their demand for access to resources, and influential sectional interest groups.

You can see this most clearly if you go through the three reasons our governments give, sometimes publicly, sometimes privately, for their behavior in the Middle East. Explanation One: Oil. Some 60 per cent of the world's remaining petrol is in the Middle East. We are all addicted to it, so our governments support strongmen and murderers who will keep the oil-taps gushing without interruption. Egypt doesn't have oil, but it has crucial oil pipelines and supply routes, and it is part of a chain of regional dictators we don't want broken in case they all fall taking the petrol pump with it. Addicts don't stand up to their dealers: they fawn before them.

There is an obvious medium-term solution: break our addiction. The technology exists – wind, wave and especially solar power – to fuel our societies without oil. It would free us from our support for dictators and horrific wars of plunder like Iraq. It's our society's route to rehab – but it is being blocked by the hugely influential oil companies, who would lose a fortune. Like everybody who needs to go to rehab, the first step is to come out of denial about why we are still hooked.

Explanation Two: Israel and the "peace process". Over the past week, we have persistently been told that Mubarak was a key plank in supporting "peace in the Middle East". The opposite is the truth. Mubarak has been at the forefront of waging war on the Palestinian population. There are 1.5 million people imprisoned on the Gaza Strip denied access to necessities like food and centrifuges for their blood transfusion service. They are being punished for voting "the wrong way" in a democratic election.

Israel blockades Gaza to one side, and Mubarak blockades it to the other. I've stood in Gaza and watched Egyptian soldiers refusing to let sick and dying people out for treatment they can't get in Gaza's collapsing hospitals. In return for this, Mubarak receives $1.5bn a year from the US. Far from contributing to peace, this is marinating the Gazan people in understandable hatred and dreams of vengeance. This is bad even for Israel herself – but we are so servile to the demands of the country's self-harming government, and to its loudest and angriest lobbyists here, that our governments obey.

Explanation Three: Strongmen suppress jihadism. Our governments claim that without dictators to suppress, torture and disappear Islamic fundamentalists, they will be unleashed and come after us. Indeed, they often outsourced torture to the Egyptian regime, sending suspects there to face things that would be illegal at home. Robert Baer, once a senior figure in black ops at the CIA, said: "If you want them to be tortured, you send them to Syria. If you want someone to disappear, you send them to Egypt."

Western governments claim all this makes us safer. The opposite is the truth. In his acclaimed history of al-Qa'ida, The Looming Tower, Lawrence Wright explains: "America's tragedy on September 11th was born in the prisons of Egypt." Modern jihadism was invented by Sayeed Qutb as he was electrocuted and lashed in Egyptian jails and grew under successive tyrannies. Mohammed Atta, the lead 9/11 hijacker, was Egyptian, and named US backing for his country's tyrant as one of the main reasons for the massacre.

When we fund the violent suppression of people, they hate us, and want to fight back. None of these factors that drove our governments to back Mubarak's dictatorship in Egypt have changed. So we should strongly suspect they will now talk sweet words about democracy in public, and try to secure a more PR-friendly Mubarak in private.

It doesn't have to be like this. We could make our governments as moral as we, the British people, are in our everyday lives. We could stop them trampling on the weak, and fattening thugs. But to achieve it, we have to democratise our own societies and claim control of our foreign policy. We would have to monitor and campaign over it, and let our governments know there is a price for behaving viciously abroad. The Egyptian people have shown this week they will risk everything to stop being abused. What will we risk to stop our governments being abusers?