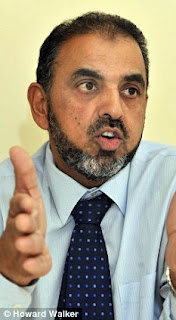 Unhappy arranged marriages are leading some Pakistani men to prey on white girls for sex, a Muslim politician has warned.

Lord Ahmed said Asian men who are forced into loveless marriages – often with cousins from overseas – may seek out white girls for ‘fun’.
But last night, the senior Labour peer was accused of encouraging the stereotyping of Pakistani communities with his comments.
The senior Labour peer is the first politician to make a direct link between first-cousin marriages and sex crimes by Pakistani men.
He said it was time for the Muslim community to ‘wake up’ to the issue, and do more to promote UK-based marriages.

Earlier this month, former home secretary Jack Straw caused a furore when he said white girls were seen as ‘easy meat’ by some Pakistani men.
He spoke out after Mohammed Liaquat, 28, and Abid Saddique, 27, were jailed for a minimum of 11 and eight years respectively for grooming and abusing 26 girls in Derby, 22 of whom were white. The seven other members of the sex gang had already been jailed at a previous trial.
Last November, five Asian men were jailed for grooming white girls as young as 12 in Rotherham, South ­Yorkshire. Lord Ahmed, who grew up in Rotherham, said many young Asian men suffer from loveless cousin marriages and called for an end to the practice. He said: ‘They are forced into marriages and they are not happy.
‘They are married to girls from overseas who they don’t have anything in common with, and they have children and a family.
‘But they are looking for fun in their sexual activities and seek out vulnerable girls.’

He said they resort to abusing girls because they do not want meaningful relationships with women. ‘An adult woman – if you are having an affair – would want your time, money and for you to break up your marriage,’ he said.
‘I get a lot of criticism from Asian people who ask: “How can you say this about Asian men?” But they must wake up and realise there is a problem.

‘I am deeply worried about this as it has happened in my own backyard, and in Rochdale and Bradford. This didn’t happen in my or my father’s generation. This is happening among young Asians.
‘While I respect individual choice, I think the community needs to look at marriages in the UK rather than cousin marriages or economic marriages from abroad.’
But Khalid Mahmood, Labour MP for Birmingham Perry Barr, said the comments could lead to stereotyping of Pakistani men.
‘I don’t think this is a problem with a particular community,’ he said. ‘There is a criminal element across all communities.
‘These comments could lead to stereotyping. Lord Ahmed should have been more careful in how he dealt with this issue.
‘But it is important to add that we should never excuse these crimes on the basis of arranged marriages. They should all be prosecuted.’
More than half of British Pakistanis marry their first cousins,
usually from abroad. In Bradford, the figure reaches 75 per cent.
Muslims from Bangladesh or India are far less likely to marry their first cousins.
The practice is legal in the UK but health experts have warned that cousin marriages have led to high levels of genetic birth defects in the Pakistani community.
Since 1997, 56 people with
an average age of 28 have been convicted of offences related to on-street grooming of girls aged 11 to 16. Of these, three were white and the rest Muslim Asians, with the majority British Pakistani.