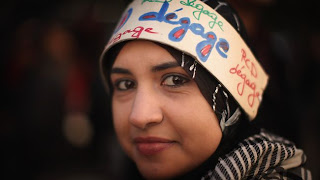 TUNISIAN women are watching warily should the uprising that ousted the authoritarian president also unravel women's rights bolstered by his secular regime in this predominantly Muslim country.

"I'm scared of the return of the Islamists," said Sonia, a 35-year-old government official who declined to give her last name, as the long-banned Islamist movement Ennahdha (Awakening) prepares to re-enter the political scene.

"They'll impose a new culture that is totally alien to us, like the fundamentalist dress code," she said, referring to the Muslim headscarf worn by some women in the north African state.

Ennahdha has said it will respect the country's laws.

Yet Mabrouka, 29, a journalist who also did not give her last name, was watchful. "I saw a lot of bearded men today. I was really afraid. I don't think the laws on women's rights will change, but the Islamists are going to be even more forceful than before."

The 23-year rule of president Zine El Abedine Ben Ali was somewhat repressive, but observers say laws put in place by his regime had improved conditions for women. His widely loathed wife, Leila, was a prominent campaigner on women's rights.

The new transitional national unity government has emphasised it will defend these rights, but many women are concerned by its promises to legalise the Ennahdha as a political party.

The worry is mainly over changes to the Personal Status Code, a law approved after independence from France in 1956 that bans polygamy and gives equal rights in a family to husbands and wives.

It also says divorced women and their children should receive alimony.

With continuing protests seeking to wipe out all trace of the ancien regime, women's rights groups are unconvinced by the assurances of the new government. Some commentators in recent days have used the new freedom of expression on Tunisian television to advocate conservative values.

One has said allowing multiple wives would help right a demographic imbalance, while another has called for women to stay at home to solve the unemployment problem.

"Women should wear veils to prevent sexual harassment. That is what one hears now on Tunisia's streets," an article in La Presse newspaper said.

Dorra Bouzid, a well-known journalist and feminist, said women had to be prepared to fight to keep the rights they had won.

"We have to be careful and multiply our efforts to protect women," she said.

Her concerns were illustrated this weekend in Tunis when a group of youths shouted crude insults at a female AFP reporter, jeering and mocking her.

"Women's rights are over after the revolution!" one shouted.

Ms Bouzid has called on the government, which is preparing the country's first democratic elections, to set up a committee to monitor women's rights and to increase the number of women in the executive and the parliament.
Posted by Zafar Khan at 10:16