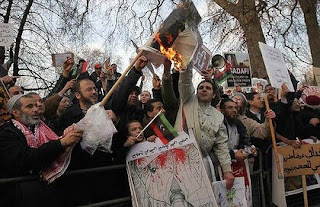 Libyans have taken to the streets and buried their dead, accusing government forces of perpetrating massacres in Benghazi and other towns said to have been taken over by anti-regime protesters.

Opposition sources claimed that at least 61 protesters had been killed in three days of unprecedented unrest largely in Libya's impoverished eastern region, though it was not possible to confirm that figure.

Human Rights Watch reported that 24 people had been killed by Thursday.

Diplomats reported the use of heavy weapons in Benghazi, Libya's second city, and "a rapidly deteriorating situation" in the latest Arab country to be hit by serious unrest.

Amid a near-total official news blackout, fragmentary information and a ban on journalists entering Libya, there was a blizzard of rumours and claims about killings by mercenaries and defections by members of the security forces.

In one highly significant development, prisoners were reported to have escaped en masse from al-Jadida jail in the capital, Tripoli, which has so far been calm.

Supporters of a Libyan "day of rage" on Facebook reported that Derna and other eastern towns had been "liberated" from government forces.

Crowds in Tobruk were shown destroying a statue of Muammar Gaddafi's Green Book, and chanting: "We want the regime to fall," echoing the uprising in neighbouring Egypt. The city's airport was closed.

Troops were reported to have landed at Benghazi airport, suggesting a significant move into the city.

Security forces were also reported to be preparing to attack al-Bayda after protesters blocked the airport runway to prevent reinforcements arriving, according to one exile group.

A statement by the country's powerful revolutionary committees promised a "sharp and violent" response to those who dared to cross the regime's "red lines".

A sermon at Friday prayers in Tripoli, broadcast on state TV, urged people to ignore reports in foreign media "which doesn't want our country to be peaceful, which ... is the aim of Zionism and imperialism, to divide our country".

Gaddafi supporters were shown on TV staging noisy demonstrations, with the leader briefly appearing in the early hours of Friday at Green Square in the centre of the city, surrounded by crowds of cheering supporters.

Umm Muhammad, a political activist in Benghazi, told the Guardian that 38 people had died there. "They were using live fire here, not just teargas. This is a bloody massacre — in Benghazi, in al-Bayda, all over Libya. They are releasing prisoners from the jails to attack the demonstrators. The whole Libyan people wants to bring down this regime." Benghazi's al-Jala hospital was appealing for emergency blood supplies to help treat the injured.

Amateur footage showed buildings burning and protesters who had been shot dead. The pictures, given to al-Jazeera TV, recorded streets empty of police or army units. Much of the violence was blamed on "mercenaries" reportedly brought in from neighbouring Chad.

Amer Saad, a political activist from Derna, told al-Jazeera: "The protesters in al-Bayda have been able to seize control of the military airbase in the city and have executed 50 African mercenaries and two Libyan conspirators. Even in Derna today, a number of conspirators were executed. They were locked up in the holding cells of a police station because they resisted, and some died burning inside the building.

"This will be the end of every oppressor who stands with Gaddafi. Gaddafi is over, that's it, he has no presence here any more. The eastern regions of Libya are now free regions. If he wants to reclaim it, he will need to bomb us with nuclear or chemical bombs. This is his only option. The people have stood and said they will not go back."

Several demonstrations were reported in western Libya. The so-called Khamis brigades, special militia units commanded by one of Gaddafi's sons, broke up a demonstration in Alzentan.

Shamis predicted that the regime might hesitate before using massive force to restore order in Benghazi or elsewhere in the east. Gaddafi, in power for 41 years, is the Arab world's longest-serving leader and presides over one of its most repressive regimes.

Libya, current chairman of the Arab League, announced that it had asked for next month's summit to be postponed "because of the circumstances in the Arab region," the Jana news agency said.