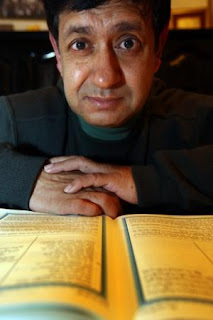 Comment: Renta-Gob Taj Hargey (the imaginary imam) and his minions at it again. However TJ do need to step up their game, sitting on the sidelines and being apolitical will not save you from the attacks.

An Islamic group fighting to keep its east London mosque, near to the Olympics site, has been described by opponents as a "supremacist movement" that encourages isolationism from wider British society.

Tablighi Jamaat, a global proselytising movement with tens of thousands of members in the UK, is trying to overturn an enforcement notice on its mosque, called the Riverine Centre, after temporary planning permission expired in 2006.

A planning inquiry at Newham town hall will determine whether the group can continue to use the modest collection of buildings. On Thursday it heard that followers of Tablighi Jamaat were taught to "shun integration with all unbelievers in order to be uncontaminated Muslims and to isolate themselves from wider society".

According to evidence from Dr Taj Hargey, an imam who runs a progressive Islamic educational centre in Oxford, the "isolationist dynamic" of Tablighi Jamaat has caused the growth of a "separatist Muslim enclave" in the streets around its Dewsbury headquarters.

Hargey was called as a witness by Newham Concern, a local campaign group which has long opposed Tablighi Jamaat and its ambitions to expand its facilities. The group is behind plans to build a much larger facility at the site, dubbed a "megamosque" by the media, although it currently has no planning application in place.

Hargey told the inquiry that Tablighi Jamaat had "achieved very little for the community" and rejected the group's assertions that closing the mosque would lead to the marginalisation of Muslim youth.

He said: "Over the past 14 years that TJ has occupied the site it has furnished no proven track record of opening their facilities to the wider Muslim community, let alone non-Muslim community. In that time they have not even managed to create any facilities for women. The facility itself currently contributes substantially to marginalisation". He described it as a "supremacist movement with adverse implications for the government's community cohesion policies".

Kazi, speaking in a personal capacity, said the government's national planning policy sought to promote "mixed and balanced communities" and that Tablighi Jamaat was "particularly inward-looking" because it only engaged with other Muslims. "The main issue is not that they are a socially conservative movement, but the fact they have been reluctant to engage in dialogue with people who are different."

Newham council has said it wants to shut the mosque down over concerns about traffic levels, land contamination and visual impact.