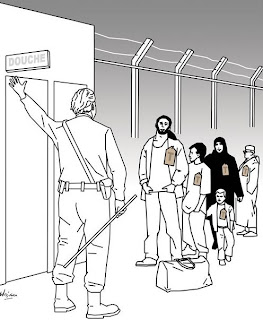 Comment: The Islamophobic Danish cartoons were promoted by you under pretext of freedom of speech but this thought-provoking cartoon is labelled 'disgusting' and forcibly removed.Geertz, you hypocrite!

The website of a left-leaning public broadcaster has removed a cartoon depicting a plan by the far-right PVV party as a Nazi death camp following serious threats to its staff.

The cartoon, by Adriaan Soeterbroek and posted on the VARA’s Joop.nl site, ridiculed a PVV plan to create
"hooligan villages", likening them to a Nazi concentration camp with PVV leader Geert Wilders showing the inmates into a shower. In World War II millions of people, mostly Jews and Roma gypsies, were killed in Nazi gas chambers disguised as showers.

The VARA says it removed the cartoon after careful consideration, saying that while freedom of expression is a key right some of its staff felt too threatened to continue working. The broadcaster has reported the incident to the police.

Due to its initial refusal to remove the cartoon, PVV top candidate Machiel de Graaf refused to participate in a debate the VARA broadcast on 16 February ahead of the 2 March provincial elections.