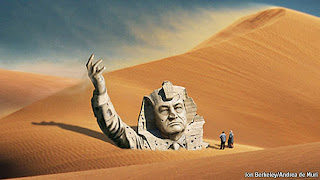 We recite to you with truth some news of Moses and Pharaoh for people who believe. Pharaoh exalted himself arrogantly in the land and divided its people into camps, oppressing one group of them by slaughtering their sons and letting their women live. He was one of the corrupters. (Qur'an, 28:3-4)

Pharaoh called to his people, saying, "My people, does the kingdom of Egypt not belong to me? Do not all these rivers flow under my control? Do you not then see?" (Qur'an, 43:51)

No one believed in Moses except for a few of his people out of fear that Pharaoh, and the elders, would persecute them. Pharaoh was high and mighty in the land. He was one of the profligate. (Qur'an, 10:83)