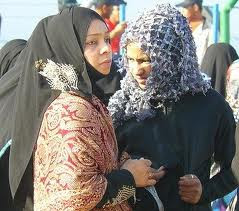 Abû Hurayrah relates that the Prophet (peace be upon him) said: “There are two categories among the inhabitants of Hell whom I have not encountered. The first are people who carry whips like the tails of cows and beat the people with them. The second are women, clothed yet naked, drawn to licentiousness and enticing others to it, their heads like the swaying humps of camels – they will neither enter Paradise nor even smell its fragrance, though its fragrance can be found to a great distance.” [Sahîh Muslim (2127)]
The meaning of the hadîth:

The Prophet (peace be upon him) describes in this hadîth two groups of people that will be among the inhabitants of Hell. We benefit from this, since it serves as a warning for us not to be like those people.

When the Prophet (peace be upon him) says – “There are two categories of the inhabitants of Hell whom I have not encountered.” – he means that he has never encountered these two groups of people in the world, though he has knowledge by way of revelation from Allah that those people will be among the denizens of Hell.

With respect to the people who carry whips like the tails of cows and beat the people, al-Nawawî in his famous commentary on Sahih Muslim, says the description matches the youths employed in his day as police officers by the chief of police.

This hadîth is clear evidence for the prohibition of wearing skimpy or revealing clothing that does not properly what Islamic law requires to be concealed.

It is also cited by some scholars as evidence that a woman cannot wear her hair in a bun tied on top of her head. This matter, however, needs to be considered in greater depth.

The best way to understand textual evidence – especially when it comes to the legal implications of the sacred texts – is to examine the texts with the full implications of their meanings and their context to ensure that we have a clear and thorough concept of what the text is talking about. This comes after understanding each term and each phrase of the text on its own.

One of the best examples to illustrate the necessity of this approach is the hadîth where the Prophet (peace be upon him) describes the second of the categories of the inhabitants of Hell, saying: “women, clothed yet naked, drawn to licentiousness and enticing others to it, their heads like the swaying humps of camels…” [Sahîh Muslim (2127)]

In order to understand this hadîth correctly, we must have a full understand of what the Prophet (peace be upon him) is describing. If we neglect or fail to appreciate the implications of some of the words and meanings given in the text, then we will consequently fail to understand any aspect of the text properly.

From this, we must recognize that the Prophet (peace be upon him) is describing a type of woman – a type that is wanton and uninhibited in every possible way. Such a woman dresses improperly; she does not cover what Islamic Law requires her to cover. She is drawn to men and she actively invites their attentions. She employs the limbs of her body in provocative ways and displays her charms in the way that she moves.

It is significant that the hadîth describes the humps of camels as “flopping” or “leaning”. This is quite different from the customary styles that women usually use when they bind their hair atop their heads, where the bun or pile is strait on top of the head and not swaying from side to side.

We must also note that the hadîth does not refer to the hair itself but refers in more general terms to the head. This means that the hadîth is not just talking about the swaying of the woman’s hair, but rather to the way the woman holds and tosses her head in a provocative manner.

On the basis of this realization, we come to the conclusion – and Allah knows best – that the text is not actually prohibiting any particular hairstyle on its own. It is permissible for a woman to bind her hair in any way she wishes – even to pile her hair up and secure it atop her head – as long as she strictly adheres to the well-known dictates of Islamic Law in her dress and her conduct.

A woman must cover everything that Islamic Law requires her to cover when she goes out in public, including all of her hair. She must also be modest in her behavior and conduct. She should lower her gaze from men and not invite their attentions. This is what matters. If she carried herself in this manner, then she can any hairstyle she likes, as long as that hairstyle is not masculine. This is because the Prophet (peace be upon him) said: “Allah curses men who imitate women and women who imitate men.” [Sahîh al-Bukhârî (5885)]