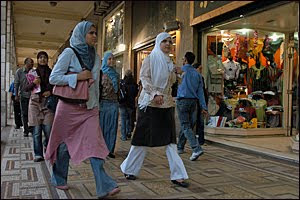 Moroccan schoolteacher Rhimou Bachtioui has been engaged three times. Each time, she called off the marriage because her fiancés wrongly believed she was "subservient, docile and very conservative".

Like a growing number of young women across the Maghreb, she wears a veil.

"The hijab is merely a matter of dress that concerns no one other than the woman who wears it. Although the veil indicates that a woman is religious and adheres to the values of Islam, this is no reason to overlook her personality," she tells Magharebia.

Thami Bahmad, a sociologist, says that the hijab ceased to be a matter of religion during the 1990's. "Some conservative parents used to make their daughters wear the veil, but things have begun to change," he says.

"Well-educated young girls are now deciding for themselves whether or not they will wear the hijab. It remains a personal liberty that does not reflect women's personalities. It's not just a conviction, but also a matter of image," Bahmad adds.

Indeed, the only study on the subject found that young women who wear the hijab have only "patchy and distorted knowledge of the Qur'anic verses and hadiths that concern the veil".

According to the 2007 study by the Association of Moroccan Women (ADFM), the hijab was seen as a symbol of religion and militancy in the 1980s but from 2000 onwards it became a secular matter and eventually just one style of dress among many. The ADFM also noted that most women choose their clothes, apart from headscarves, according to popular fashion.

As with Morocco, the appearance of the hijab in Algeria was linked to the beginnings of the Islamist movement. Decades after the dissolution of the Islamic Salvation Front (FIS), which advocated wearing of the veil, the style remains.

Yet while some complain that the haiek (Algerian traditional dress) has given way to the Islamic headscarf, the veil is increasingly popular with young Algerians to the point that they consider it a new style trend.

"Algerian women have always been accustomed to wearing a head covering, be it the Algerian haiek mrama or the colourful Kabylie scarf, but then there is an imported type of headscarf that does not have its roots in Algeria," said senior citizen Youssef Ferradji.

At an Islamic clothing shop in one of the busiest streets of Algiers, women are delighted by pink scarves with sequins and rhinestones designed to attract Algerian fashionistas.

There is now a "typical Algerian hijab" which has no basis in religion.

"Most of our girls wear headscarves with tight pants. It is as if they're caught between the duty of repentance before God and the desire to please," notes Mrs. Boudia. She chooses to complement her headscarf with a long black tunic.

The hijab revival in Algeria has prompted a nickname: the "Kinder Surprise" veil.

"It is very difficult being a woman in Algeria. One can understand that they want to protect themselves from violence and attention that a different kind of look might attract in public," he adds.

Meriem, his fiancée, tells Magharebia that the hijab represents "the hypocrisy of Algerian society".

"Many of my girlfriends decided to wear the scarf in the hopes of getting married," she explains with a smile.

Tunisia faces a similar phenomenon. Nearly 20 years after former President Habib Bourguiba issued a decree banning headscarves or hijabs in public institutions, veils are visible everywhere, from universities and government offices, to the beaches and hotels, to stores and coffee shops on public streets.

Many link the veil's return to the growing phenomenon of spinsterhood.

"Wearing the veil by some girls to hunt down husbands has become a rampant phenomenon on Tunisia," Saeeda Sweileh told Magharebia. "My chances to attract a would-be husband have become greater since I started wearing the veil," the 31-one year old unmarried woman says.

"Most of the girls who access the marriage chat websites on the internet wear the veil and practice all religious duties in order to attract the other party," Saeeda adds. "Other girls take the veil as a tool to hide their past and to win the trust of men. In this way, they become less monitored by their families."

Eman al-Zaidi says that she wears a scarf out of conviction, rather than out of a desire to get a husband. But she is well aware that other girls have different reasons for putting on the hijab. "Unfortunately, we can't deny it. This bad mentality that exploits religion for worldly ends does exist."

The phenomenon of wearing the veil to win a husband has indeed increased in recent years, Monia Bou Abd tells Magharebia. "I reject this exploitation of religion and veil for personal ends," adds Monia, who does not wear a veil. She believes that "good conduct and respectable clothing" are enough, without having to wear the veil to prove virtue.

"The most important thing is for the girl to behave without false pretences that would fall off with the first clash with her life partner," Monia adds.

Nadia al-Uamari agrees that "some girls in Tunisia spare no effort in order to reach their ends". She explains that those who are looking for work often wear short clothes.

"However, when it comes for looking for a husband, they dress differently," she says.

For her part, Farida Aiari says, "This phenomenon does exist in Tunisia, but I don't recommend these twisted ways for looking for husbands." She performs all of her religious duties, she adds, without having to wear the veil.

Men, meanwhile, are becoming aware of the practice.

"These tricks no longer deceive young people in Tunisia. They understand well that good manners and exemplary behaviour can't be proven just by the veil or long clothes, given that the matrimonial relation is much deeper," Wahab al-Jamani tells Magharebia.

"We shouldn't get involved with a life partner merely based on appearances that are in most cases deceiving," he adds.

Anis Slim, agrees, saying that he did not care whether his future wife is veiled or unveiled.

"What's important is good manners, good conduct and education and being a good mother."

With so many different opinions on the cause of the headscarf's renewed popularity in the Maghreb region, Magharebia asked an imam for his opinion about using the hijab to attract a husband.

"If men or women resort to appearances for the purpose of deception and trickery, and if these appearances are contrary to what is truly inside them, then this is hypocrisy itself," the imam said.

He cited a hadith: "God doesn't look at your images or bodies; rather, He looks at your hearts."