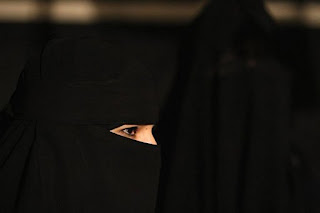 The practice of temporary marriage has long been common in Shiite Muslim communities, especially in Iran. The idea is that rather than having an affair, a man who wants to be sexually involved with a woman should marry her — for a few months, or even, hours — so the relationship will be legitimate.

In Iraq, the practice was banned under Saddam Hussein but then flourished after the American invasion. Now, though, some men are using the system to take advantage of poor women, and many of Iraq's Shiites say the very religious institutions that sanction such marriages are to blame.

One mother of three, who is so ashamed about what happened to her she doesn't want to give her name, says her husband abandoned her when she found out he preferred men. She had no way to support the family.

A religious figure in her neighborhood promised to help. He brought her to his home, locked the door and had sex with her. He offered her $15.

The woman says the man who had sex with her worked with leading Shiite religious clerics in the Iraqi city of Najaf. It's one of the most revered places in Shiite Islam.

Tales Of The Temporary Marriage

Another woman, Kawthar Kadhim, says she approached a religious scholar who works with one of the clerics and asked for help. Her husband had left her after the Gulf War, she says. Her father had tuberculosis and was coughing up blood. And her mother was paralyzed.

The scholar told her to lift the veil from her face, she says. And then he basically proposed.

"He said, 'Would she accept to marry me, muta'a marriage?' I said, 'No'," Kadhim says through an interpreter. "And when he found out that I was refusing to marry him, he said, 'OK, let her go home and then I will send for her if I get some money.' And he never did that. He never sent for me."

Other women in Najaf told us that religious offices help poor women only if they're pretty, which makes them good candidates for muta'a marriage.

One said her brothers won't allow her to go near such places, for fear she'll be tricked into a temporary arrangement.

Nagham Kadhim runs a women's rights group in Najaf. She says muta'a marriage is a sensitive subject in the holy city. But she says abuse of the practice is common. "The muta'a marriage happens when there is an economic factor, like when the woman is poor and [does] not have money," she says through an interpreter. "And the religious institution would offer her those job opportunities, through working for a kindergarten, looking after children. And then she would receive like 100,000 dinars."

That's about a $100 a month. Once the women get the job, Kadhim says the institution will host seminars about temporary marriage to convince them the practice is acceptable.

The 'Right Way' To Do A Muta'a Marriage

Aqil al Shammari is a religious scholar who works with a handful of leading figures in Iraq's Shiite community. He explains that muta'a marriage goes all the way back to the Prophet Muhammad, who once told his traveling companions they could purchase a wife with a handful of dates if they were away from their regular wives.

Shammari says he has temporarily married at least five women, while traveling. Each time, he says, he paid them. He made sure they used birth control. He kept his agreement to be married for only a month. And he didn't do anything to sully their reputations afterward.

This, he says, is the right way to do muta'a marriage.

But the line between the right way and the wrong way may be very fine.

Shammari insists that the abuse of muta'a marriage is still rare in Iraq. He says he wouldn't mind his daughter or sister entering into a temporary marriage, if the man is pious and religiously committed.

But then he gets a sly look on his face. Of course, he says, such a man is hard to find.