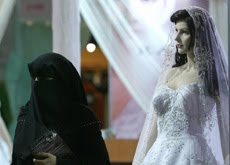 RIYADH // The marriage of a government official to a 12-year-old girl has inflamed a long simmering battle over marriage to minors, pitting Saudi human rights activists and at least one prominent Muslim sheikh against government officials who have been accused of failing to curb the widespread practice. The fact that the unidentified groom, who lives in the city of Najran, was a mazoun, or marriage official, whose job it is to preside over the signing of marriage contracts, only added to the outrage over the marriage among many Saudis.

After more than two years of media coverage of the negative consequences of marriage and sex for minor girls, and despite calls by some Saudi officials and even some clerics to end the practice, the government has yet to set a minimum age for marriage. Activists say officials fear a backlash from religious conservatives.

Some tribal elders also see nothing wrong in giving young girls in marriage. Many families marry their daughters to older men for financial benefits, getting payments from grooms in advance and if a marriage is broken.

“If a girl exceeds 10 or 12 then she is eligible for marriage, and whoever thinks she is too young, then he or she is wrong and has done her an injustice,’’ Sheikh Abdul Aziz told an audience in Riyadh University last year.

Many argue that Islamic law in fact permits such marriages, citing the Prophet Mohammed’s marriage to Aysha when she was nine.

The man who married the 12-year-old girl told Al Watan newspaper on Friday that he was goaded into consummating the union by his mother and that it took “several attempts over two weeks” to accomplish, even as the girl expressed bewilderment about “why her parents gave her away to me”.

The man said he had had sex with the girl after two months of marriage, although her father asked that a physical relationship not begin until a year after marriage.

Debate over the issue has raged in the pages of newspapers and community websites. “Any man who desires or performs sex with a little girl, and that is what a 12-year-old female child is sick in the head,” wrote one woman, who identified herself as Shana Badawi, in the English-language Arab News.

Another reader by the name of Mohammed Rehman countered: “Are you Muslim or what? What age did your mother Aisha, may Allah be please with her, marry? … next time think of the Islamic legislation before the western view!”

Saudi human-rights advocates have pleaded with members of the consultative Shura Council for a strong recommendation in favour of a minimum marriage age. But members of the council, whose members are appointed by King Abdullah, say the country’s conservative nature makes that very difficult.

“There are a lot of people who are very religious and they think you cannot say that 13 or 14 is not an eligible age for marriage,” Talal al Bakri, chairman of the family, youth and social affairs committee, said yesterday in an interview.

The activists say Saudi Arabia is required to legislate a minimum marriage age in keeping with its obligations as a signatory to the UN Convention on the Rights of the Child, which sets the age of maturity at 18.

At least one senior cleric has also dismissed the argument that since marriage to minors was acceptable for Prophet Mohammed in the 7th century, it also is acceptable for
Muslims in the 21st century. The Prophet’s marriage to Aysha “cannot be equated with child marriages today because the conditions and circumstances are not the same”, Sheikh Abdullah al Manie said in a January interview with Okaz newspaper.

“It is a grave error to burden a child with responsibilities beyond her years,” added Sheikh Abdullah, who sits on the Council of Senior Ulema. “Marriage should be put off until the wife is of a mentally and physically mature age and can care for both herself and her family.”

The government-backed Human Rights Commission has come out against marrying of minors, but has not explicitly called for minimum-age legislation.

Instead, the commission president, Bandar Bin Mohammed al Aiban, said it is organising a workshop on the subject to give experts an opportunity to give their views on the matter. Physicians, psychologists, social workers and Sharia scholars will participate. No date has been set yet.

Mr al Aiban said he is aware that many Saudis are outraged that no concrete steps have been taken to stop such marriages. “We’re feeling that [impatience],” he said. “And that is something that will support the consensus that we are trying to build.”

“It’s a big social problem now,” said Mohammed al Zulfa, a former Shura Council member. “I’m glad people are still talking about it … I hope the minister of justice will look at it seriously and stop it.”