The Acton princess calling for reform in Saudi Arabia 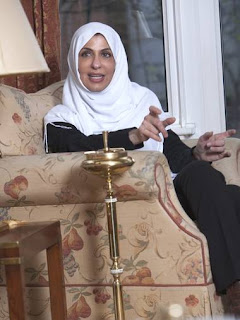 Her Royal Highness Princess Basma Bint Saud Bin Abdul Aziz is one of the more unlikely critics of the élite that runs Saudi Arabia. The oil state boasts a 15,000-strong royal family but it is rare for a voice from within its ranks to become part of the growing clamour for reform in the desert kingdom.

As the youngest daughter of the country's second king and niece to its current ruler, she is from the highest echelons of the Saudi monarchy. Just as her privileged status gives her considerable authority in the debate about change, so this carefully dissenting royal has much to lose if her actions incur the displeasure of Saudi Arabia's ultra-conservative regime.

But then Basma Bint Saud is no ordinary Saudi princess.

A 47-year-old divorcee and a successful businesswoman, she has spent the last five years in the country building a parallel career as a journalist and a blogger, confronting head on sensitive subjects from the abuse of women and poverty in the world's second biggest oil exporter to the chilling effect of the mutawa, the kingdom's draconian religious police.

Such has been her success at shining a light on the problems in Saudi society (a Facebook fan page has 25,000 followers), she now conducts her campaign not from her birthplace in the capital, Riyadh, or her previous home in Jeddah but a recently-acquired house in the west London suburb of Acton which she shares with three of her five children.

The princess underlines that she was not forced to leave Saudi Arabia and goes out of her way to emphasise that her criticisms do not relate to her octogenarian uncle, King Abdullah, or the other senior members of the monarchy. Instead, the focus of her anger is the tier of governors, administrators and plutocrats who run the country day to day.

Amnesty International this month accused the Saudi authorities of conducting a campaign of repression against protesters and reformists in the kingdom in the wake of revolutions sweeping the Arab world, during which Riyadh sent troops into neighbouring Bahrain while protests for greater political freedom among Shi'ites were stamped out. The impression of increased authoritarianism was not allayed by detention in October of three young Saudi film makers who posted on the internet a documentary about poverty in Riyadh.

The princess insists she is no "rebel" nor an advocate of regime change. But in an interview The Independent, she equally does not pull her punches when it comes to the question of who bears responsibility for the ills that she considers beset her country.

Sat in a living room decorated with Saudi artefacts and in front of a table carrying a plate of Saudi dates ("the best in the world"), she said: "The problems are because of the ruling ministers. We have ministers who are incapable of doing what has been ordered from above because there is no follow up, because there are no consequences. If you are poor man and you steal, your hand is cut off after three offences. But if you are a rich man, nobody will say anything to you."

Asked if her decision to speak out means she risks losing what she has, she replied: "Oh, definitely. Definitely."

Speaking fluently with a neutral English accent picked up as a teenager in the Home Counties, Basma is the first to admit she is the product of a not only a privileged upbringing but also an atypical one for a Saudi princess. She is the 115th - and last - child of King Saud, the eldest surviving son of Saudi Arabia's founding monarch Abdul Aziz.

King Saud was overthrown in 1964 by his brother, Faisal, and left for exile in Europe. Basma's mother, a Syrian-born woman who was chosen for her future husband when she visited Mecca on the haj at the age of 10, took her children to the Middle East's then most cosmopolitan city, the Lebanese capital of Beirut, where the young princess was schooled by French nuns among Christians, Jews and Muslims who did not adhere to the austere Wahhabi branch of Islam practiced in Saudi Arabia.

When Lebanon's civil war broke out in 1975, the family fled for Britain where she attended a Hertfordshire girls' school and an international college in Oxford before spending two years studying in Switzerland. It was a very different existence from the closeted upbringing normally led by young Saudi royals.

She explained how, at the age of 17, she joined one of the first visits to post-Mao China by foreign students, describing vividly how her group were taken to a farm and treated to a delicacy in the form of the brains of a live monkey chained and slaughtered at the table. She said: "Some girls screamed and fainted. Others were sick. I went to the car and refused to go back into the building. China was like visiting the moon."

Equally alien was the land of her birth when she returned in early 1980s. Upon entering the royal court ("I was very careful, very nervous to behave correctly"), she found a cut-off society which, paradoxically, was more relaxed than present-day Saudi Arabia.

She said: "If China was like the moon, then arriving in Saudi Arabia was Mars. At least you can see the moon from Earth. It was a completely secluded society but I wouldn't say backward - not as backward as it is now. It was much more open and tolerant. You wouldn't hear people saying ‘go to prayer', ‘go and do this and that'.

"This is the atmosphere you have now. It is such a non-tolerant atmosphere, even of other sects. Any other sect that doesn't actually belong to our community is thought to be - I'm not going to be sharp but very specific - not the true Islam."

It is an intolerance which she claims pervades Saudi society, fromented by the mutawa, otherwise known as the Commission for the Promotion of Virtue and Prevention of Vices, ironically founded her father to act as a check on traders charging inflated prices.

The princess said: "Our religious police has the most dangerous effect on society - the segregation of genders, putting the wrong ideas in the heads of men and women, producing psychological diseases that never existed in our country before, like fanatacism. The mutawa are everywhere, trying to lead society to a very virtuous life that doesn't exist. Everthing is now behind closed doors."

Amid regular accounts of executions - Amnesty International last week described as "truly appalling" the death penalty carried out on a Saudi woman for "sorcery and witchcraft - Basma makes the point that human rights abuses happen to both genders but fall disproportionately on women.

As a result, she is slightly bewildered by the focus on the continuing prohibition on Saudi women, who cannot go to university or take a job without a male guardian's permission, from being allowed to drive.

She said: "Why don't we actually fight for a woman's right even to complain about being beaten up. That is more important than driving. If a woman is beaten, they are told to go back to their homes - their fathers, husbands, brothers - to be beaten up again and locked up in the house. No law, no police will protect them.

"We are overlooking essential rights of a human being - the right to mix between the sexes, to talk and study freely... We have got human rights but they are paralysed. They are completely abstract, for the media and the western world."

The princess, who divorced from her Saudi husband six years ago and went into business setting up a series of restaurant chains which she now intends to expand into Britain, has not been afraid to air similar views in Saudi Arabia, writing in newspapers and websites on issues from the mutawa, to women's prisons and clothing. She eschews what she describes as the expected "sleep by day, live at night" leisured life of Saudi princesses and is instead setting up a charity to fight poverty in the Arab world by offering a Fair Trade-type deal to artisans which will include access to education and health care.

But in a country where doctrine and adherence to orthodoxy can be everything, Princess Basma is aware of the hostility generated by a woman speaking out. She has studied Islam in depth, becoming a scholar of the faith's great texts to give her the authority to challenge the teachings of Saudi imams. Armed with the evidence of scripture, she has rebuked the authorities in writing on issues from driving to the doctrinal basis for the requirement that women cover up in public.

But the eruption of democracy movements in Tunisia, Egypt and Syria has brought an abrupt end to her reporting from Saudi Arabia. This summer, officials began to suggest she "edit" her work. She said: "The first time they took out some sentences. The second time, paragraphs. The last time, they told me to change the whole article or the editor who published it would go to prison. I didn't want to send anyone to prison on my behalf."

Even though she insists her work was carried out until recently with the blessing of King Abdullah, here is a princess treading a narrow line.

Following the death in October of Crown Prince Sultan bin Abdel Aziz, the 86-year-old heir to the throne, Saudi Arabia is still ruled by the ageing and conservative generation of her uncles, who she says have given her "very strong hints" that her criticisms are not currently being met with approval.

Sitting close to a photomontage of the Saud dynasty which shows her father as a young man next to her grandfather and beside the boy Prince Nayef, the 78-year-old head of the interior ministry who is de facto ruler, Basma underlines her respect for her father's ruling brothers.

She said: "I am still an obedient citizen and I will always be behind the royal family. But I will never be quiet about what is happening on the ground. The unfairness of the distribution of wealth, about the power that has been unevenly given to people because they have complete obedience to those above them.

"I owe my uncles everything and what I owe them most is to tell them the truth. My mistake, my ruin is going to be insisting on telling the truth even if they don't like it. Because I think they need to hear it, especially from one of their loyal, royal own."
SOURCE
Posted by Zafar Khan at 10:00