Child marriages: Why are they still legal? 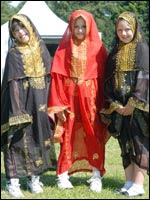 Ask yourself this simple question. Would you enter into a contract with a child? Would you consider anyone under the age of 16 or even 18 to be mature enough to make a life-changing decision and be bound by the terms of this decision for life? Most people would say no!

Let us consider the validity of a contract from a legal perspective. Since the beginning of time, for a contract to be deemed valid, there must be informed consent from both parties to the agreement. One cannot enter into a valid contract with someone who does not have the mental or legal capacity to truly know and understand the terms to which they are agreeing. There must be a reason why, legally, a person under the age of 16, 18 or 21 in some countries is considered to be a minor — and thus mentally unfit to be a party to a contract.

Marriage is a form of contract, and it is not just any kind of contract, it is a contract that changes one’s life and affects a person’s entire being in the most relevant ways. Even in Islam, for this contract to be valid, there must be “informed consent” from both parties otherwise the marriage will be considered null and void and thus, legally, there are justified grounds for annulment. Both Islamic Law and Saudi Law require full consent of both parties to the contract for it to be lawful.

Therefore, it could be said that a child under the age of 18 cannot possibly be a party to a contract. The final decision to enter into a marriage is for the woman and the man to make, which means that a marriage with any undue influence would be void. A child (anyone under the age of 18) cannot possibly be deemed mature or mentally capable to enter into such a contract with another person, and especially not with someone who is 10, 20, 30 years her senior. Moreover, the practice of forced child marriage is a clear violation of Islamic principles and laws since Islam made it clear that a woman’s consent is vital for a marriage to be considered valid, even if the said child being wed has already reached puberty.

The most commonly used justification for child marriage is that the Prophet Muhammad (peace be upon him) married Aisha (known as the mother of the believers) at the tender age of 9. Yes, indeed the prophet did marry Aisha when she was a child, but the Prophet wed Aisha so young in order for her to become his student and after his death, she would go on teaching Islam. Aisha was married at 9 so that she could live in the Prophet’s home and breath the Prophet’s ways so that her mission of continuing his legacy in teaching Islam would be possible. It is also well known that the Prophet and his young wife were not “married” until she was 15 or older as per the most of the Islamic historical sources. The reality of the child marriages that take place today is far from justifiable no matter how much one tries to find valid reasons for their occurrence.

Saudi Arabia has no law setting a minimum age for marriage for either gender. There have been repeated talks and so-called reforms that are supposed to happen in order to end child marriage that take place today. The controversially still-legal act of marrying a child not only defies true Islamic teachings of consent, but also human nature as a whole.

Human rights activists are speaking out against the marriage of children, including Zuhair Al-Harithi, a spokesman for the Human Rights Commission, who said that Saudi Arabia has approved and signed the UN Convention on the Rights of the Child, which defines a child as someone under 18, therefore the practice of child marriages violates the international agreements the Kingdom signed and is a party to. In addition the Saudi National Human Rights Association has criticized child marriages saying that it was a violation of childhood. The association continues to work with the authorities to restrain the practice and protect children’s rights.

Sheikh Muhammad Al-Nujaimi who is a strong opponent of child marriages and other Islamic scholars, activists and writers have urged the government to pass legislation setting the minimum age for marriage and to resolve differences among the Kingdom’s religious authorities over the issue. Since there are so many different (religious) opinions around the truth behind child marriages and what is considered an old enough age to marry means that, as a nation, we need to settle the issue through legislation.