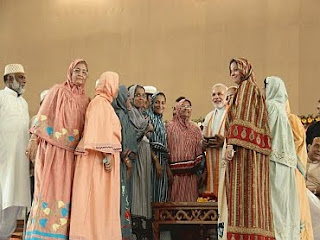 Even after 17 years, Nasreen (name changed) vividly remembers the dilapidated room in Bhendi Bazaar’s Bohri Mohalla where she was made to lie down while her mother and aunt held her arms and legs. A local mullani, an aged woman from the community, pulled out a blade and performed the
‘khatna’ or female circumcision on Nasreen, who was then seven years old. The practice is considered a rite of passage for Bohra women, who are made to undergo the genital mutilation even today.

“I still remember the searing pain that lasted for several days,” said Nasreen, 24, who is now a housewife. “I was so angry with my mother for letting this happen to me but she was convinced it was the right thing to do.”

Nasreen said she would not put her daughter through the trauma and has signed an online petition launched by Mumbai-based activist Tasleem (last name withheld) to stop khatna. (link)

The petition has so far received 318 signatures and has sparked a debate in the close-knit community. “I have gone through the horror and every time I read an article about it, it brings back terrible memories of the day. Female circumcision is wrong and a very inhuman ritual,” writes Zarine Lakdawala on the web page.

Tasleem said “About 90% of the women in the community are made to undergo this brutal cut.”

Several Bohra women spoke to HT recounting the horror. For Farzana (name changed), 22, who was circumcised at the age of nine, the 30-second act left a grave scar. “It took me more than three months to urinate without having tears in my eyes. Even today, the pain erupts during menstruation,” said Farzana, a Lokhandwala resident.

According to community women, the ritual is carried out during the summer vacation as the wound usually takes a month to heal.

In the case of Razia (name changed), 27, her parents vehemently opposed the practice, angering relatives. “While on the one hand, the community is progressive because it allows women to study and work, on the other, such barbaric acts continue to persist,” said Razia.

According to Asghar Ali Engineer, a Bohra reformist and activist, “The custom has African roots and no other Muslim sect permits it.”

The practice has its supporters too. “As per the Bohra Shariat (law), female circumcision is mandatory. We do not want to question the Syedna’s preaching. We believe in his interpretation of the Quran,” said Mustafa Attarwala, a Dawoodi Bohra scholar. “We are not really concerned about online campaigns to ban the practice. It will not affect the community’s beliefs,” he added.

Nasreen Pardiwalas wrote on the online petition web page that it was “unfair” to question the Syedna’s words. “There is a big difference between modernity and rebellion. People assume that standing up against age-old community rituals is a sign of being modern,” said Pardiwala.

“Personally, I have been through the process. I will even make my daughters undergo it. The pain is tolerable and has strengthened my relationship with my husband,” she wrote.