What Is Hayaa and Why Is It Being Defined by Men? 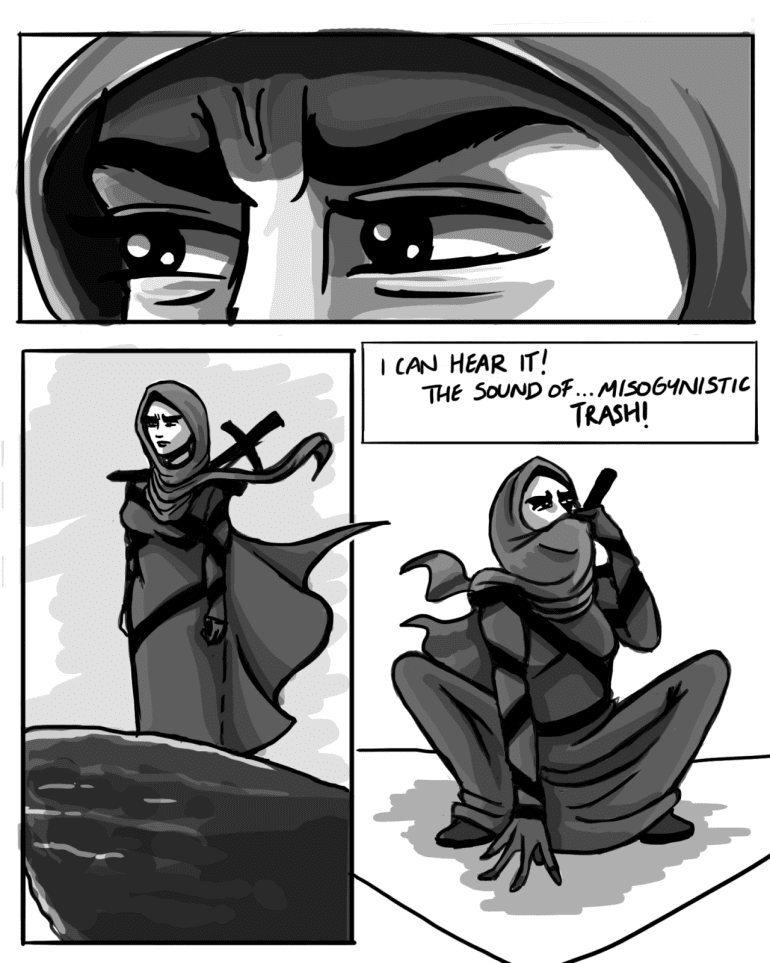 Your very existence as a Muslim woman is a form of resistance.
If you’re shy and quiet, you’re a prude. You’re boring. If you’re loud and outgoing, you’re attention-seeking. If you are a Muslim woman that doesn’t don the hijab, you’re asked why you don’t by Muslims — or why you would follow such a barbaric religion by bigots. If you do wear the hijab, every aspect of your hijab is criticized for not being “hijab,” white feminists want to liberate you, men want to test you and see how pure you really are and whether the hijab you’re wearing is just a front.
Because of your hijab, all of a sudden, you become the spokesperson for more than one billion people. Even when you don’t want to answer the questions you’re bombarded with, you feel obligated because the very act of wearing hijab is a form ofdawah, and the words you leave with this person can change their perspective on Islam. And in the middle of all of that, everyone has something to say about your hayaa.
Hayaa isn’t something someone can look at you and see. Similar to your iman(faith), it is purely between you and Allah (SWT). The word hayaa, is derived from the word hayat, which means life.
Hayaa can mean many things, the most popular definition of it is shyness, but it also means modesty, humility and self-respect. There are different types of hayaa, the social one and the one you have with Allah (SWT). The hayaa (shyness) that has to do with Allah (SWT) has to do with feeling embarrassed about committing a sin, no one knows how you feel about committing a sin except for Allah (SWT). That is solely between you and Him.

WHEN IT COMES TO MEN, HAYAA CAN BE TALKED ABOUT WITHOUT BRINGING UP THEIR CHASTITY BECAUSE IN A HETERO-PATRIARCHAL SOCIETY, A MAN’S VIRGINITY ISN’T INTRINSICALLY ATTACHED TO THEIR WORTH.

The societal one is the tricky form of hayaa. When it comes to men, hayaa can be talked about without bringing up their chastity because in a hetero-patriarchal society, a man’s virginity isn’t intrinsically attached to their worth. A woman’s hayaa is always spoken about in connection to her modesty, how appropriately she hides her beauty from the unlawful gaze of men — and after 1400 years of Qur’anic exegesis, it amazes me how hayaa has been reduced to how docile, de-sexed and nonthreatening a woman can be.
Hayaa for the woman in Islam is defined many times by men — and each time, it has something to do with hindering the man’s fragile, ravenous sexual appetites by contorting the Muslim woman into something that’s impossible. Likeable, but not loose or flirtatious. Quiet but not too quiet. Delicate but strong. Confident but not boastful. Intelligent but un-intimidating.
Celibacy until marriage is also stressed when it comes to a woman’s hayaa, along with hijab. Sex before marriage is haram, or forbidden, for both men and women — yet when we speak about a man’s hayaa, this is left out. When you consider how hayaa could also mean self-respect, hayaa is put into a better perspective.
How you treat yourself, your body and the space around you is all a part of your self-respect. As a Muslim, your body has rights over you for you to treat it well while you’re on this earth. One can’t tell someone that they have no self-respect because there is truly no way to know if someone has respect for themselves.
Khawlah bint al Azwar was a warrior, fought alongside the sahabah, or the companions of Prophet Muhammad (PBUH), and they mistook her for a man because of the way she fought. She was confident, fearless and humble about her abilities as a warrior. Prophet Muhammad (PBUH) even recommended that she be in the front lines in the fight against the Romans.
When one of the Roman generals tried to pursue her for marriage she said: “I wouldn’t even accept you to be the shepherd of my camels! How do you expect me to degrade myself and live with you? I swear that I’ll be the one to cut off your head for your insolence.” — and that’s exactly what she did.

THE IDEA THAT WOMEN HAVE TO BE SHY, QUIET AND WEAR AS MUCH CLOTHING BECAUSE WOMEN HAVE TO HIDE THEMSELVES/THEIR BODIES IS NOT ISLAMIC, IT’S PATRIARCHAL.

Many times, when Muslim men and women speak about the great women in Islam, they bring up the loyalty of Khadijah (RA), but they won’t bring up that she was a hustler. They’ll bring up how charitable and softhearted Ayesha (RA) but they don’t bring up how knowledgeable, articulate and intelligent she was. The strength, the intelligence and the might of Muslim women aren’t brought up because that threatens men.
The idea that women have to be shy, quiet and wear as much clothing because women have to hide themselves/their bodies is not Islamic, it’s patriarchal. Our modesty as Muslim women, or our hayaa, is not directly attached to our hijab and how subservient we can be. The moment a woman doesn’t wear hijab or she’s too confident and “loud,” people start questioning her iman (faith).
Women in Islam are given agency over their bodies and whether they wear hijab or not, in the end — it’s a choice. The issue is, hijab is personal. What one considers modest, and what one believes will please Allah (SWT) is different than the next person, regardless of how you interpret the Qur’an and what you believe is right. Not wearing hijab doesn’t diminish one’s hayaa.
When hustlers like Khadijah (RA) existed and warriors like Khawlah fought for Islam, it can’t be more obvious that Islam encourages women to be self-assured and confident — not shy. Hayaa is not about how invisible you can be or how quiet you can be, because all of the great women in Islam have been the exact opposite of that.
Source