A 1400 YEAR-OLD RELIGION AND ITS 21ST-CENTURY REPRESENTATIVE 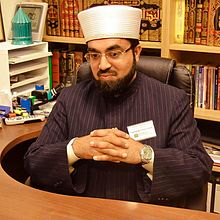 Love this brother. He is an inspiration alhamdulilah.

He believes that Muslims often isolate themselves in an effort to protect their faith and identity, something that is, in fact, damaging for the community. “We are living in a society where people do accept and tolerate other views. We should reach out and not be afraid”, he urges his fellow Muslims. His recent invitation to members of the LGBT community to the mosque’s end of Ramadan meal in June reflected this sentiment of inclusion. “As Muslims we must reach out to others’’, he says, “we must not treat people differently because of their lifestyle or beliefs”. Although such an expression of kindness and support appears radical in relation to the more stereotypical image the religion being strongly doctrinal, Al-Qadri cites the teachings of Islam as the foundation for his argument, where you must treat people as human beings first – something which he says has been lost among many Muslims.

Nonetheless his actions were still somewhat radical, and he came under criticism from the group that he represents for reaching out in this way. Some felt that this gesture was akin to him condoning homosexuality, but in the face of the controversy, he stands by his actions. “Inviting them does not mean that we condone or that we agree with [homosexuality]”, he explains. “It means that despite our disagreement we can still share a meal together”. Although he does not condone the act, he believes that the LGBT community, like Muslims, share similarities. The two minority groups have both been marginalised and should join together against a common injustice. He gives a practical example to support his decision to invite LGBT members to the event, which he hopes that Muslims will be able to appreciate, drawing a comparison between the two Islamic sins of drinking alcohol and homosexuality: “Muslims, when they have friends that are consuming alcohol, they would be okay with it, they will sit down together, they will interact together, but they won’t drink themselves and they will not treat the person that drinks alcohol differently. But they will treat someone who is gay differently, and that is something that is not understandable”. Al-Qadri emphasises that the teachings of Islam are to treat people as humans first, and the success of the meal, which had over over 20 LGBT members alongside some Muslims all enjoying themselves together, stands as testament to that.