Carer murdered by husband over her work with men 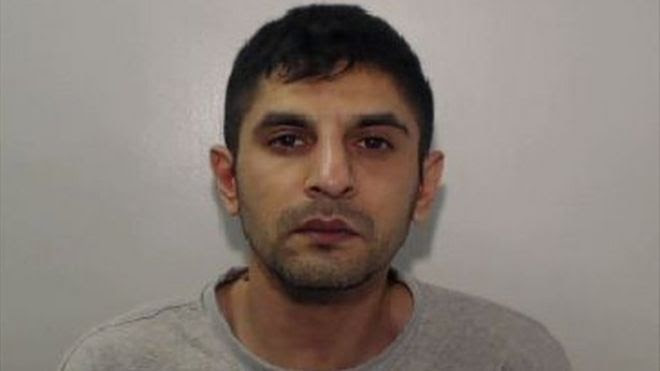 A disgraceful munafiq murderer who orphaned his own children!
A man who told his wife it was "not halal" for her to work with other men as a carer has been jailed for life after admitting her murder.
Manchester Crown Court heard Imran Khan, 38, stabbed Nasreen Khan, also 38, at their home in Cheadle Hulme, Stockport on 18 April while five children were in the house.
Khan was extremely controlling of his wife, the court heard.
He was sentenced to life in prison with a minimum of 20 years.
Khan had sent his wife angry text messages which said "leave the job" and "I don't give permission", the court heard.
The court was told the couple had a volatile relationship and frequently split up.

Khan complained they had no physical intimacy and did not like that her job as a care assistant because it involved one-to-one contact with other men, even though she was not bathing them, the court heard.
Judge Patrick Field said it was a "merciless attack" and described Khan as a "selfish and controlling man" who "did little to support" his wife and family.
He told Khan there was "an element of jealousy of your wife's independence of mind".
"She was a devoted mother. She worked hard to support her family and she was good at that job", he said.
"Unless anyone should think there was a cultural clash, let it be said the evidence shows your parents and sister were entirely supportive of Nasreen's choice."

Mrs Khan told a colleague she was going to confront him and stand up for herself, the court heard.
On the night of her death, the court heard the couple had been arguing at their home on Cheadle Road.
The court learned when Mrs Khan told her husband she wanted him to leave, he said: "I've got nothing to lose now have I?"
He then phoned his father and the court heard he told him "I've got no choice. I'm going to kill her and kill myself."
There were five children in the house who the court was told heard her screams as he repeatedly stabbed her in the kitchen. He then phoned his father again, saying "I did it" before hanging up.
He discarded the knife on the driveway of their house before driving off.
Mrs Khan died later in hospital.
The court heard he told police: "I always loved her. I never meant to do nothing."
His lawyer told the court Khan was "genuinely remorseful".
Source