How not to think about violence against women: Noopur Tiwari 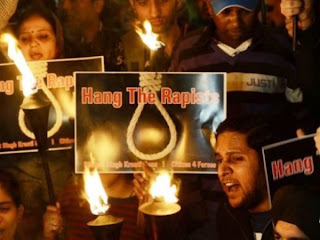 I woke up in Paris last weekend to the news of the Delhi protests. I felt relieved. People are not just watching or suffering quietly anymore, I thought to myself. I wanted to be there too, out in the streets of Delhi. For all those times I had to suffer sexual harassment in Delhi, I want to be part of this churning for change now.
My Parisian friends asked me what was going on. And I told them about the new “national outrage” and the stories that had been stoking the anger. That’s when I realised I needed to make a list. What was informing my idea of what’s going on? These stories making it to the headlines, do they have something in common?
Yes, they do have one very obvious thing in common. They are all “sensational” news items. They are either:
-gang rapes;
-cases with voyeuristic descriptions of how women are stripped or paraded naked;
-rapes that involving a celebrity;
-rapes ending in suicide, murder or mutilation.
We need to be careful here. These stories “sell” better than other reports of violence against women. They fire up people easily and the most recent has even triggered a ‘movement’. Awareness is a good thing half-baked awareness is not. While we are in the mood to fight for change let’s also be aware of the risks we’re running.
By highlighting only these sensational stories, we are making only these rapes seem “real” and making other, more common forms of rape, such as acquaintance rape or marital rape, seem “unreal” or not serious enough to require strict action. Let’s not forget the crimes against women that are being committed every day but not making it to headlines. The suffering of those women also deserves outrage.The Indian media has made a huge effort to break a common rape myth: that women “invite” sexual assault or harassment and that their life is “ruined” if they are raped. This has made a difference to the way in which we talk about victims and survivors. We slam the Khap leaders for saying rapes happen because women fail to do enough to shield themselves from uncontrollable male desire. We make Sheila Dikshit eat her words for saying a woman who is out very late at night is being too adventurous. We give room to “survivors” on television rather than feel sorry for “wrecked victims”. That’s perfect. But we still haven’t realised that the way we talk about the perpetrators of sexual crimes remains seriously flawed.
Rapists are being called “crazed animals” who cannot control their vile sexual impulses and anger. We’ve already heard reports in the media about how Ram Singh was a “volatile man” and his friends call him “mental”. One report says, “Singh is a cold and remorseless”. In fact, we are constantly trying to classify the perpetrator an outsider, someone on the fringes, a monster. Even the Prime Minister in his address spoke of “monstrous crimes”. But rather than say “they are beasts” we should really be saying “they are men”. That brings the responsibility of the crime squarely back on us, for tolerating societal norms that have led to a fierce culture of violence against women.

“When we are forced to confront the reality of a real live rapist, the discourses of both bestiality (“these people are animals!”) and madness are both summoned up, establishing a trend of constantly pushing the rapist to the bounds of society, in order not to have to recognise the one in our workplace, our home, our bed.”

Delhi Police Commissioner, Neeraj Sharma, said on TV that the recent Delhi gang rape case will be treated as “rarest of rare”. The media let him get away too easily! By calling this case “rare” the police is trying to say “no one is responsible”. Speaking of this crime as an aberration, leads to the idea, that no one could have done anything about it.

There is another dangerous trend in these reports. The stories being played up are often about victims from the middle class and rapists from poorer sections. In the recent Delhi gang rape case, the victim was a medical student and the prime accused a bus driver. In the Bombay Purkayastha case, the woman was a lawyer and the criminal a security guard. In both cases, these men wanted to “teach a lesson” to these women, both women were “better off” than them. In the Rueben and Keenan case, the press talked of “national rage” and here’s how the accused were described in a paper: “One of them is a labourer, another is a barber while the rest are unemployed, police said.”
A fear psychosis is building up about these “other” men from weaker social classes who are turning against educated, free women. The idea taking root is that these social classes are full of sexual deviants and more and more depraved men are attacking innocent, free thinking, middle class women. In reality, let’s not forget, that these are not the only rapes that are being committed, they are simply the only ones being reported in greater numbers.
With each rape case that gets wide coverage, the anger and the hysteria multiplies. “Hang the rapists in public” is the common refrain one hears on the social media. One particularly violent set of images, where a mob lynches a rapist in Lebanon, was doing the rounds on Facebook. Someone wondered why we weren’t doing the same to rapists in India. And sure enough, “national rage” led to the lynching of as many as five men for sexual harassment in Jharkhand. One journalist was shot dead by the police in a protest in Imphal. The media really needs to tread very carefully now. There’s a thin line between media activism and whipping up hysteria. The protesters have to be cautious too. Saying no to violence cannot be done with more violence.
There is still a great deal that is not said and not reported in the media about violence against women. We need to start making room for the stories that have been ignored or forgotten as we go along. Our fervour to get justice for women is well-meaning and our media is trying to make sense of it all. But our anger and emotions can also be manipulated. Let’s not forget that there will be sane voices but also misled ones. There will be TRP wars, lumpen elements and populist appropriation that will keep adding distortions to the larger picture. As individuals, whether we work for the media or consume it, we will have to constantly scrutinise what we are saying, why we are saying it and what it is leading to.
(Noopur Tiwari is a journalist in Paris.) source
Posted by Zafar Khan at 09:00