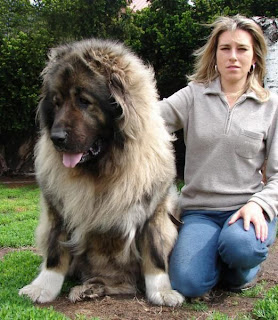 Comment: one of the most pathetic ways Islamophobes malign Muslims and Islam is to say we are cruel to animals. They misquote hadith and write absolute rubbish to try and back up their stupid points. I would like everyone to know I love dogs. I also love cats, elephants, horses and rabbits etc etc. Isn't the above a beautiful dog, subhan Allah!


It is encouraged for Muslim to let Animals eat of the plants that they have planted. Prophet Muhammad(saw) is reported to have said:


Narated By Anas bin Malik: The Prophet said, "If any Muslim plants any plant and a human being or an animal eats of it, he will be rewarded as if he had given that much in charity." – [Bukhari Vol. 8, Book 73, #41] Even if an animal eats from a plant which has been planted by man, the person will receive rewards for it. Moreover, another hadith is as follows:
Narated By Abu Huraira: Allah's Apostle said, "While a man was walking on a road. he became very thirsty. Then he came across a well, got down into it, drank (of its water) and then came out. Meanwhile he saw a dog panting and licking mud because of excessive thirst. The man said to himself "This dog is suffering from the same state of thirst as I did." So he went down the well (again) and filled his shoe (with water) and held it in his mouth and watered the dog. Allah thanked him for that deed and forgave him." The people asked, "O Allah's Apostle! Is there a reward for us in serving the animals?" He said, "(Yes) There is a reward for serving any animate (living being)." – [Bukhari Vol. 8, Book 73, #38] & [Muslim Book 26, Chapter 39, # 5577]
Prophet Muhammad(saw) taught people to be kind to animals. Allah(swt) rewarded the act of the person who quenched the thirst of a thirsty dog. While men were accustomed to be cruel to the animals, Prophet Muhammad(saw) by the command of Allah(swt) taught Mankind to be merciful and kind to all living things. Not only were humans given their rights, the animals too were given theirs. Islam is a religion which teaches man to be merciful towards all living things. Thus there is reward for a human even if he feeds an animal.

Animals have many purposes and are used for such by humans. This does not mean that men have the right to treat animals the way that they want to. While people would hit their animals on the face, Islam forbids such an act. Every creation is very sensitive as far as the face is concerned. If I were to lightly tap a person on the shoulder or on the back, they would not feel offended but if I were to do the same on the face then everyone would find that offensive. Allah(swt) realizes this and thus through Prophet Muhammad(saw) such an act was strictly forbidden as seen by the hadith below:

During the times of ignorance (Ja’hillah) people would cut the limbs of animals while they were alive. This was a disgusting act and Islam was the religion that brought an end to this practice. Not only this but shooting at an animal who is tied was also forbidden by Prophet Muhammad(saw).

Narated By Ibn ‘Umar: The Prophet cursed the one who did Muthla to an animal (i e., cut its limbs or some other part of its body while it is still alive). – [Bukhari Vol. 7, Book 67, #424]
Narated By Hisham bin Zaid: Anas and I went to Al-Hakam bin Aiyub. Anas saw some boys shooting at a tied hen. Anas said, "The Prophet has forbidden the shooting of tied or confined animals." – [Bukhari Vol. 7, Book 67, #421; #422]
While the animal rights were being laid down by Allah(swt) through Prophet Muhammad(saw), the Prophet(saw) also narrated an incident regarding a woman who imprisoned a cat and made it starve to death.

Narated By 'Abdullah bin 'Umar : Allah's Apostle said, "A lady was punished because of a cat which she had imprisoned till it died. She entered the (Hell) Fire because of it, for she neither gave it food nor water as she had imprisoned it, nor set it free to eat from the vermin of the earth." – [Bukhari Vol.4, Book 56, #689]

This hadith clearly suggests that being brutal towards animals is a grave sin and Allah(swt) will punish him who treats the animals without kindness. It is obligatory for the owner of the animal to feed it. Many rights have been given to animals and Muslims are required to obey these guidelines for transgression would make them sinful. While oppressing humans is wrong, Islam also teaches that oppression towards animals is wrong.
Islam gave animals rights at a time when animal rights were not recognized. Today the world is bringing awareness towards the rights of animals whereas Islam gave them their rights more than 1400 years ago. The most famous story about being kind to animals is seen when a cat came and slept on the robe of Prophet Muhammad(saw) while he was reading the Quran to the listeners. When it was time for the Prophet(saw) to get up, instead of disturbing the cat, he cut that piece of the robe and stood up. Today who would cut of a piece of their cloth so that the cat’s sleep would be undisturbed?

Prophet Muhammad(saw) encouraged people to be good towards the animals and forbade acts which are cruel. Oppression is an evil whether the one being oppressed is human or an animal. In Tirmidhi as well as Abu Dawood it is mentioned that Prophet Muhammad(saw) prohibited the act of inciting animals against each other. This act is practiced today as well where cocks and dogs are caused to fight with each other and people place their bets. Not only does this become a sin for it falls under the category of gambling but also because two animals are caused to fight against each other.

There are people who claim that Prophet Muhammad(saw) ordered the killing of all dogs. If one were to read the references they give it is indeed true that such an order was given. However these people will never quote the hadith which explains why such an order was given.
Ibn Mughaffal reported: Allah's Messenger (may peace be upon him) ordered the killing of dogs and then said: what is the trouble with them (the people of Medina)? How dogs are nuisance to them (the citizens of Medina)? He then permitted keeping of dogs for hunting and (the protection of) herds. In the hadith transmitted on the authority of Yahya, he (the Holy Prophet) permitted the keeping of dogs for (the protection of) herds, for hunting and (the protection of) cultivated land. – [Muslim Book 10, Chapter 31, #3814]

When one reads this hadith one gets to learn about the context of the order. The people of Medina complained that the dogs were being a nuisance to them. This is just like today where many countries have problems with street dogs. There have been many cases where these street dogs have bitten people and transmitted diseases like Rabies. Many have even died from this disease. Due to the complains by the people regarding these stray dogs, Prophet Muhammad(saw) ordered that such dogs who are hazardous to the people should be killed. Back in those days there were not any animal shelter facilities and thus this was the only way to safeguard the people. The hadith further on explains that all dogs were not to be killed and the permission to keep dogs was also given.

Moreover, Prophet Muhammad(saw) also instructed men not to overburden their domestic animals. Burdening a donkey with more load than that which he can easily carry is again a wrongful practice which was forbidden by Allah(swt). Even while sacrificing the animals, it is told that we are to use sharp knives and not blunt ones for the latter would cause pain and discomfort to the animals. Some people have suggested that the Islamic method of slaughtering the animal is cruel and should be stopped. This however was proven to be untrue as the animal dies a painless death. A study was carried out at the School of Veterinary Medicine by Professor Wilhelm Schulze and Dr. Hazim to detect the pain an animal feels when he is slaughtered by the Islamic way. The EEG recorded showed that with the Islamic way, the animal felt no pain and it was observed that most of the blood was thrown out of the body thus making the meat more hygienic as opposed to the captive bolt pistol stunning method. The conventional method was also observed to be painful to the animal.
The earth has been made for all the creatures that inhabit it and thus they are given their due rights by Islam.

And the earth hath He appointed for (His) creatures. – [Quran 55:10]
Islam takes great care when laying down its rules and regulation and has made sure that men do not behave with cruelty towards them. Even in a state of war, the Muslims are prohibited from killing the animals in the lands of the enemies and are also prohibited to burning or cutting down trees for no reason. Indeed Islam is a mercy for everyone. It is not only a religion but a complete way of life which even secures the rights of animals.