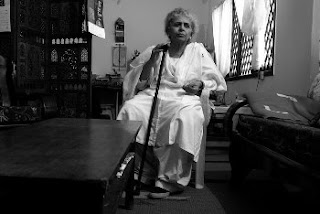 Some people are born with a mission. Others discover it along the way. A few develop it just about when others of their age are ready to retreat into seclusion, to spend their remaining days in contemplation and introspection, doing the little things of life – reading or gardening- that they were too busy to do earlier.

Prof. Hasnath Mansur’s life demonstrates that it is never too late to contribute to society. She started active social work after she retired, committing herself to improve the lives of Muslim women, “Education is their way out” she says.

Bangalore-based Prof. Mansur should know. For 23 years she was the principal of a girls’ college. Throughout her life, what struck her most were the dramatic absence Muslim women in higher education.

She had started her education in Salem, Tamil Nadu. In the local Sharada College, of the 2,000 students, only five were Muslim girls. In a college in Coimbatore where 1,500 students were enrolled, just four were Muslim.

She says “It was so depressing. These were big colleges getting huge grants from the government. But the visibility of Muslims was nonexistent. I started wondering what’s wrong with my community?”

Over the years, she discovered that acute poverty was the main culprit. Except for a few households, most Muslims in the area were dirt poor. Parents could not afford the fees. “One of the biggest and enduring myths is that it is our religion that stands in the way of Muslim women’s progress. But I can say with conviction that it is not Islam but poverty that is the root cause” she says.

It was disconcerting that many Hindus and Christians believed the myth that Islam imposed restrictions on women. “But far more disturbing” says Prof. Mansur “was that many Muslims too believe this myth.” There was very little that Prof. Mansur could do to break this myth as long as she was working. Life was too hectic. But when she retired, she felt the urge to do something for “the hapless, voiceless section” of her community.

If Islam did indeed forbid education for women, then here devout father, a district sessions judge, would not have educated her. The trouble was that poverty unfortunately kept the Muslim community not only poor, but backward, ignorant, superstitious and illiterate. Prof. Hasnath points out that this enabled a misguided section of the orthodox clergy to get away with their misinterpretations of Islam. The indisputable fact is that when it took root in the 7th century, Islam enshrined more rights for Muslim women than what were enjoyed by Jewish and Christian women at that time. But some self appointed male custodians of social more misinterpreted the Koran to accord religious sanction to the prevalent patriarchal, tribal and feudal traditions in Arabia. And that continues till this day. Thus in addition to poverty, ignorance and ill health, Indian Muslim women had to cope with the added burden outdated or incorrect interpretations of the Islamic Law (Shariah).

However, the real problem lay in the fact that there is no universally codified legal interpretation of women’s rights in the Muslim Ummah (community). The challenge therefore lay in educated Muslim women like her coming to the forefront to ensure that the right of women under the Qur’an and Shariah are progressively interpreted, ensure that these rights are protected and create awareness among Muslims, especially the women, of these rights so that they are protected so that they do not continue to be legally, economically and socially undermined in a male-dominated society using religion as a pretext.

But Prof. Mansur was in a bit of a dilemma. She had retired and finally has time on her hands. But she didn’t know how to go about it. She says: “What can you do after retirement? I didn't want o join politics or sit in dharnas. I was too old for all that. This country is not for old people.”

But rather fortuitously, she connected with IFES, an international NGO committed to the spread of democracy and human rights. They had just set up shop in India and had started the Muslim Women’s Initiative to promote Muslim women’s rights. Her agenda coincided perfectly with the IFES, which had evolved a comprehensive tool kit, comprising information leaflets, posters, handbills and charts. Thus together, from2005, they started conducting a series of camps to spread the message.

Instead of people coming to them they went to the people with their message. Prof. Mansur recoils with horror as she remembers her first foray into a poor Muslim neighborhood in Bangalore.

Says she: “It was so horribly dirty and stinking. The smell was so foul, I couldn’t breathe. There were open, festering slimy drains all around, just think, children are born and die here.”

The local residents mocked her: “You can’t breathe this air for five minutes. But we live here.” Her heart broke but her eyes blazed with anger. “Everyone goes on about Bangalore being the Silicon Valley of India. Our authorities spend millions of Rupees beautifying Brigade Road and Commercial Street. But in localities like these, where no VIP ever visits even the basic civic amenities are missing. You become cynical.”

But rather than succumb to cynicism, the grim reality only strengthened her resolve to extricate her community out of this mess. Ultimately, women would get to know of their right and insist on securing them if they were educated.

In her camps, Prof. Mansur quoted from the Qur’an and the Indian constitution to inform the Muslim women about their rights. Recalls Prof. Mansur: “Words like Constitution are too big for them to comprehend. So one has to describe it in ways that they understand. It has to be relevant to their condition if they are to make sense of it.”

So she talked about the rights an Indian Citizen enjoyed under the constitution, the freedom and the protection guaranteed by it, the right to have food, clothes, house and work. The Muslim women were amazed when she quoted verses from the Qur’an that protected the rights of women.

She stressed the need to become literate. The Qur’an guarantees women the right to education, income and share in property. A marriage cannot be consecrated until girl has given consent. Mehr (dowry) is paid to the bride and it must be handed over to her before the marriage is solemnized.

Islam prescribed the hijab (head scarf) but not the niqaab or face veil that is more of an Arabic custom. The Qur’an emphasis is on women preserving their dignity and modesty so as to not reduce themselves to sexual objects. Prof. Mansur told them: “It doesn’t matter what your local Imam says. This is what our Hazrat (Prophet Muhammad) has said.”

The camps created a subtle but significant shift in attitudes. Till now, most Muslim activism was restricted to charity work, collecting money or relief materials and distributing to the needy. Says Prof. Mansur: “We were doing something for the first time. We are giving information. Facts and verses from the Qur’an. We are making them think.”

Significantly, the camps did not only address women. Men boys, students were also encouraged to attend. Some camps in fact were exclusively for men. Reveals Prof. Mansur: “We expected some resistance from the men. But we surprised. They were supportive, they were very impressed by the charts and kept telling us that they didn’t know this is what the Qur’an actually stated.”

In the beginning, the men were a bit diffident, not entirely forthcoming. “But” explains Prof. Mansur, “they were a bit withdrawn, not because of their gender but because they were uneducated.”

Inevitably, there were some illiberal sections of the Muslim community that viewed the camps with suspicion. Prof. Mansur calls them “subversives”. They threatened and warned, proclaiming they would urge people to boycott, pelt stones and disrupt the camps.

But Prof. Mansur and her team took it in their stride, remained undeterred in their mission. Eventually, nothing of the sort happened. Says Prof. Mansur: “It’s all a matter of traditional elite wishing to continue to exercise their power and control over the masses. They can do so only if the bulk of Muslims remain poor, uneducated and backward.

“They feed them with illusions of the after life so that they meekly endure the misery and injustices they suffer here on earth. When these elite see their power and control weakening, they hit back. They browbeat and threaten us. But we have to offer stiff resistance. Eventually, they will back off when their hold on the populace genuinely weakens. Education, especially for women, is the best way to ensure that this happens. It may take a generation, but it will happen.”