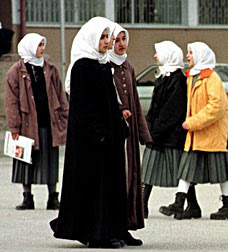 AN alarming number of under-age girls – some as young as nine – are being forced into marriage in Islington, according to a leading campaign group.

The Iranian and Kurdish Women’s Rights Organisation (IKWRO) claim that at least 30 girls in the borough were forced into marriage in 2010.

The practice was condemned by the Imam of Finsbury Park Mosque, who said such marriages were against Islam and “unacceptable”.

He pledged to invalidate any marriage which he said were carried out by “back-street Imams”.

IKWRO, which made headlines last month when they revealed there had been almost 3,000 “honour-based” violence cases in 2010, has shown the Tribune records which revealed at least three 11-year-old girls and two nine-year-olds had been forced into marriage with older men within Islington. The oldest girls involved were 16.

They have warned that hundreds of Islington girls could be suffering sexual, emotional and physical scars as a result of the child marriages every year and are calling for teachers, social workers and police to be better trained to spot and manage the abuse.

Information from the Ministry of Justice, following a Freedom of Information request, revealed that 32 Forced Marriage Protection Order applications were made for children under 16 in Britain last year.

Six of these were made for under-16s within Islington at the Royal Courts of Justice, although these were not necessarily made for Islington residents.

At the Islington court, “five or fewer” orders were made to protect children between the ages of 9-11.

The orders are a form of injunction that threaten legal punishment if marriage takes place due to emotional or physical force.

In most cases, the children fear they will be killed if they reveal the truth to anybody, while others believe they will be separated from their families and taken into social services’ care.

Dianna Nammi, director of IKWRO, explained that the girls are married in a mosque’s sharia court. This means they are not legally married according to British law, rendering the Home Office unable to recognise or prove the abuse.

“They are still expected to carry out their wifely duties, though, and that includes sleeping with their husband,” she said.

“They have to cook for them, wash their clothes, everything. They are still attending schools in Islington, struggling to do their primary school homework, and at the same time being practically raped by a middle-aged man regularly and being abused by their families. So they are a wife, but in a primary school uniform.

“The reason it doesn’t get out is because they are too terrified to speak out, and also the control their families have over them is impossible to imagine if you’re not going through it. The way it is covered up is so precise, almost unspeakable.”

Ms Nammi said that one 13-year-old had to sneak out of a maths lesson to contact the group, because she was being monitored so closely by her family.

“Her teacher didn’t notice because she said she’d gone to the toilet, but when she got home that day she was beaten,” she said.

“Her father knew she hadn’t been in maths because he had sent an uncle to spy on who she was talking to through the classroom window.”

Ms Nammi said that the girls are married off to family friends or family members to stop them from losing their virginity to anyone not chosen by their father.

However, the incentive is also often financial.

“The girl automatically becomes her husband’s property, so he takes financial responsibility for her,” said Ms Nammi.

“In fact, often the husband has to start contributing to the girl’s family, so it becomes a way of bringing in another salary.

“Who are girls going to tell? Often they feel like teachers at school won’t understand what their families are like. They will think they’re like Western families, and won’t understand that if they pass on anything at all that they’ve been told to the family, then the girl will be killed. So they just chose not to tell at all.”

IKWRO offers counselling and support to the children, but does not force them to take any action until they are ready. Often, that involves being placed in social services’ care.

Finsbury Park Mosque imam Ahmed Saad said he was glad the issue was being highlighted, and stressed that it was not an Islamic problem, but a cultural one.

“This is down to ignorance, and ignorant people who will use any excuse they can to do this to their children,” he said.

“It is the practice in their home countries and they don’t want to stop that here, so they will say it’s in the Koran, when it is not. According to Islam, it is entirely unacceptable.

“My own grandmother was married at the age of 11, but that was in 1907 in Egypt when lifespans were much shorter.

“I have heard of this happening in Islington by back-street imams. They are imams who have little knowledge of Islam – they are not educated, and they simply lead prayers, and yes they will do this and it is very quietly kept a secret with no one admitting to it.

“Islam says both parties must truly consent in their hearts, and if the girl was forced into it in any way then she can invalidate her Sharia marriage with or without the husband’s permission.

“I will personally do that for anyone who comes to me. This is simply child abuse, as a child does not know what they are doing.

“My heart goes out to the girls.”

Imam Saad explained that Sharia law stated an individual can marry when they begin puberty, with the most important stipulation being that they are “rushd”, or mature enough to understand marriage.

A spokesman for the Forced Marriage Unit (FMU) said he was “unsure” whether the lack of legal status of the marriages affected whether the they could intervene or not, but directed the Tribune to government practice guidelines on dealing with forced marriage.

The spokesman added that due to the lack of legal status the marriages may be a “criminal matter that only the police can deal with”, but admitted to it being "”a very grey area”.

The FMU guidelines state: “It is probable that children’s social care will play a key role in protecting the interests of the child or young person. This can be achieved not only by arranging practical help such as accommodation and financial support, but also by co-operating and working with other agencies such as police, health and education professionals.”

A Turkish and Farsi speaking adviser at IKWRO, said while that the Islington Police’s domestic violence co-ordinators were “brilliant” at dealing with the cases, front-line officers “can make things worse by not being sensitive because they don’t really understand what’s going on”.

“When they try and speak to the child’s parents they often have a language barrier,” she said.

“Too often they don’t bother to call an interpreter so they don’t talk to the parents at all about what they’re doing, until it goes to court much later. A common complaint we have is that it depends on who you are, too – some women say that when they’re from poorer families the police don’t take them as seriously.”

ROJIN – this is not her real name – told a Tribune reporter how she had been forcibly married at the age of 12 to a 32 year-old man. She said she grew up in Finsbury Park where she lived with her parents from the Middle East.

After her “marriage” she said she was placed in care and then allowed to live with friends.

“I was forced by my dad,” she said. “He didn’t beat me or anything, he told me I was useless, no one would ever accept me anyway so I’d better just marry while someone wanted me because it wouldn’t happen again.

“I thought that if I didn’t do it I would just be taken away and married anyway, so it was better to co-operate and at least get to stay in England.

“Also, if I co-operated then if my husband treated me badly at least my family would support me against him. But if I said no, they’d say I was bringing shame on the family and wouldn’t support me no matter what he did, because I would have made them angry.

“My parents sorted out an imam to marry us quite quickly. The first one they approached said no, the next one said yes, and this was in Islington. I met my husband three days before my wedding, which only my close family was invited to.

“We were married in my parents’ house.

“He was a 37-year-old man from Birmingham [the Tribune understands he had come from the Middle East]. I told my parents that I had fallen in love with him and I was doing it for myself because my mum felt bad about what they were doing to me. That night I had to go to his flat and sleep with him because that’s what marriage is.

“After my mum died I was taken into care. I told my social worker about everything, but I missed out the bit about sleeping with him.

“Social services have no understanding of Islam, and they don’t know that for me, as a Muslim, I am still his wife because we were married by an imam and we have not divorced. So I still text him and want to go to see him because I have to as a wife.

“This is more of a marriage to me than a legal one because it’s by Allah. In my mind I know I have to still be a wife to him till he finally divorces me or I feel something bad will happen to me, or my mum, who is now dead, will have shame on her name.

“He refuses to divorce me, though. Friends have said they’d be happy to come with me to the mosque for a divorce to say yes to it.

“I live with friends so I don’t have to sleep with him, cook for him, nothing like that. He can’t beat me, and no one can kill me here, but I am trapped as his wife.

“Even when I am an adult and leave, I’ll have to go back to him as his wife until one day he finally grants me a divorce.”

The Tribune has been unable to authenticate what this girl told us.
We have seen a record kept by the Women’s Rights body (IKWRO) stating she had been placed in care but there did not appear to be independent evidence that this had taken place.
We stress this is the story of a 12-year-old girl as told to this newspaper.
source
Posted by Zafar Khan at 10:00