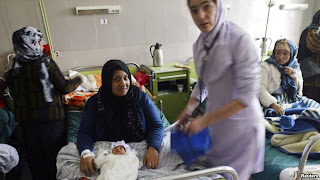 At the age of 29, childbirth is nothing new to Rukhsar, yet the expectant mother can't help being apprehensive about her fifth child.

Her first four children, aged between 2 and 12, are all girls, and she feels pressure to deliver a boy to please her husband. If she gives birth to another daughter, Rukhsar says, she fears he will seek a second wife.

Not having a son has placed enormous strain on the couple's marriage, says Rukhsar, a native of the eastern Afghan district of Surkhrud who gave only her first name.

In Afghanistan, tradition among many families dictates a strong preference for boys, and blame is often placed on the mother if she gives birth to a girl.

This is for a variety of reasons: sons are seen as future breadwinners; the continuation of a family's lineage; the inheritors of the estate.

Ehsanullah, a 33-year-old Kabul resident and father of two girls and a boy, explains that sons are expected to take care of their parents in old age. For many Pashtuns, he says, it's virtually unacceptable for elderly parents to live with a son-in-law.

On the other hand, says Ehsanullah, who gave only his first name, daughters can be a financial burden, and then they grow up and marry into somebody else's family. He says that before the birth of his third child, a son, he was embarrassed to tell relatives he had daughters.

"It doesn't mean that I don't love my daughters," he stresses, but there is another very real extreme that reveals itself in violence against mothers who "fail" to give birth to a son.


Women's rights activists in Afghanistan say that bullying and ostracizing women over the gender of their babies is not uncommon.
​​Earlier this month, the issue made headlines when a man in Konduz Province allegedly strangled his wife after she gave birth to the couple's third girl, rather than his much-desired boy.

Women's rights activists in Afghanistan say that such extreme cases are highly unusual, but bullying and ostracizing women over the gender of their babies is not uncommon.

Ironically, most of the pressure does not come from the father of the baby girl, but from the mother-in-law and other family members. This is according to Anisa Imrani, who was recently put in charge of women's affairs in the eastern Nangarhar Province.

"A woman who gives birth to a boy gets completely different treatment after the delivery. Her husband's family feeds her with the best possible food available; they usually slaughter a chicken for her," Imrani says.

"The birth of a boy is celebrated with lavish parties. But when a girl is born, the mother feels ashamed and she has to deal with harassment by her in-laws."

Imrani says that while no reliable statistics are available, the phenomenon is more widespread among less-educated families.

Farida Hoad, an Afghan obstetrician who has worked in Kabul's Malalai maternity hospital, places the blame on "ignorance."

"They don't understand and do not accept, that it's the father's chromosome that determines the gender of the child," says Hoad, a native of Nangarhar.

Parents' preference of sons over daughters is strongly connected to men's and women's primary roles in the deeply religious society, in which men are traditionally the bread-winners and women are the homemakers.

In more conservative families, girls and boys are treated much differently by their parents while growing up. "My sister and I are allowed to eat only after my brothers finish their food," explains Nuriya, a teenage girl from the eastern Paktia Province.

As the heads of their families, men not only look after their elderly parents but they are also expected to take care of their younger siblings if called upon. Therefore, Afghan parents see their sons as a kind of insurance policy for old age.

Gulghotai Mahmadzai, a 55-year-old housewife from the southern city of Kandahar, says the fact that she never bore a son means she now faces an uncertain future.

Moving in with one of her daughters is not an option for Mahmadzai, and she lives alone. But Mahmadzai says that if she had had a son, her life would have been completely different.

Afghan women's rights activists say education and raising awareness is key to changing the situation. They call on religious leaders and mullahs, who enjoy great respect in Afghan society, to take part in campaigns to end gender discrimination in families.

"Our religion forbade discrimination over the gender of the child, which was prevalent before the arrival of Islam," says Afghan religious scholar Mawlana Mustafa. "It's anti-Islamic and is a sign of ignorance and faithlessness."

In Surkhrud, Rukhsar's marriage hangs in the balance as she waits to find out her baby's gender. If the ultrasound determines that she isn't carrying a boy, Rukhsar says, divorce or the prospect of having to share her husband with a second wife is imminent.

"Nothing else can change my situation," Rukhsar says.
source
Posted by Zafar Khan at 10:00