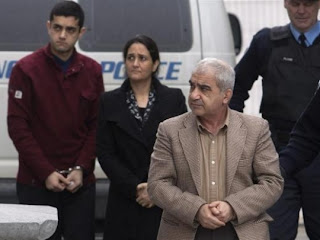 A jury in Canada has found three members of an Afghan family guilty of drowning three teenage sisters and another woman in what the judge described as "cold-blooded, shameful murders" resulting from a "twisted concept of honour". The verdicts concludes a case that shocked Canadians.

Prosecutors said the defendants killed the three teenage sisters because they felt they had dishonoured the family by defying its strict rules on dress, dating, socialising and using the internet.

The jury took 15 hours to convict Muhammad Shafia, 58; his wife Tooba Yahya, 42; and their son Hamed, 21. They were each found guilty of four counts of first-degree murder, which carries an automatic life sentence with no chance of parole for 25 years.

After the verdict was read the three defendants again declared their innocence in the killings of sisters Zainab, 19, Sahar 17, and Geeti, 13, as well as Rona Amir Muhammad, 52, Shafia's first wife in a polygamous marriage.

Their bodies were found 30 June 2009 in a car submerged in a canal in Kingston, Ontario, where the family had stopped for the night on their way home to Montreal from Niagara Falls, Ontario.

The prosecution alleged it was a case of premeditated murder, staged to look like an accident after it was carried out. Prosecutors said the defendants drowned their victims elsewhere on the site, placed their bodies in the car and pushed it into the canal.

"It is difficult to conceive of a more heinous, more despicable, more honourless crime," Maranger said. "The apparent reason behind these cold-blooded, shameful murders was that the four completely innocent victims offended your completely twisted concept of honour ... that has absolutely no place in any civilised society."

In a statement following the verdict, the Canadian justice minister, Rob Nicholson, called honour killing "barbaric and unacceptable in Canada".

Defence lawyers said the deaths were accidental. They said the Nissan car accidentally plunged into the canal after the eldest daughter, Zainab, took it for a joy ride with her sisters and her father's first wife. Hamed said he watched the accident, although he didn't call police from the scene.

After the jury returned the verdicts, Muhammad Shafia, speaking through a translator, said: "We are not criminal, we are not murderer, we didn't commit the murder and this is unjust."

His weeping wife, Tooba, also declared the verdict unjust, saying, "I am not a murderer, and I am a mother, a mother."

Their son, Hamed, speaking in English said: "I did not drown my sisters anywhere."

Hamed's lawyer, Patrick McCann, said he was disappointed with the verdict. His client would appeal and he believed the other two would as well.

The prosecutor, Gerard Laarhuis, said: "This jury found that four strong, vivacious and freedom-loving women were murdered by their own family in the most troubling of circumstances.

"This verdict sends a very clear message about our Canadian values and the core principles in a free and democratic society that all Canadians enjoy and even visitors to Canada enjoy," he said to cheers of approval from onlookers outside the court.

The family had left Afghanistan in 1992 and lived in Pakistan, Australia and Dubai before settling in Canada in 2007. Shafia, a wealthy businessman, married Yahya because his first wife could not have children.

Shafia's first wife was living with him and his second wife. The polygamous relationship, if revealed, could have resulted in their deportation.

The prosecution painted a picture of a household controlled by a domineering Shafia, with Hamed keeping his sisters in line and doling out discipline when his father was away on frequent business trips to Dubai.

The months leading up to the deaths were not happy ones in the Shafia household, according to evidence presented at trial. Zainab, the oldest daughter, was forbidden to attend school for a year because she had a young Pakistani-Canadian boyfriend, and she fled to a shelter, terrified of her father.

The prosecution said her parents found condoms in Sahar's room as well as photos of her wearing short skirts and hugging her Christian boyfriend, a relationship she had kept secret. Geeti was skipping school, failing classes, being sent home for wearing revealing clothes and stealing, while declaring to authority figures that she wanted to be placed in foster care, according to the prosecution.

Shafia's first wife wrote in a diary that her husband beat her and "made life a torture", while his second wife called her a servant.

The prosecution presented wire taps and mobile phone records from the Shafia family in court to support their honour killing allegation. The wiretaps captured Shafia spewing vitriol about his dead daughters, calling them treacherous and whores and invoking the devil to defecate on their graves.

"There can be no betrayal, no treachery, no violation more than this," Shafia said on one recording. "Even if they hoist me up onto the gallows ... nothing is more dear to me than my honour."

Defence lawyers argued that at no point in the intercepts did the accused say they drowned the victims.

Shafia's lawyer, Peter Kemp, said after the verdicts that he believed the comments his client made on the wiretaps may have weighed more heavily on the jury's minds than the physical evidence in the case.