Comment: Anyone who advocates FGM (in any form) is a disgrace to humanity, and the Muslim men that do are especially deserving of contempt because they twist and defame Islam to serve their own oppressive patriarchal agenda. 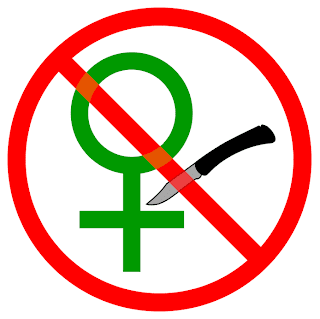 In 2008 Egypt outlawed the practice of female genital mutilation, but as Newsnight's Sue Lloyd-Roberts reports in an article which contains graphic detail and which some readers may find disturbing, the ban has had little effect and the practice is still rife.

"Of course she must be circumcised," said Olla, referring to the timid 11-year-old girl sitting beside her.

I asked Olla if I could find out from the child herself, her daughter Raaja, who sat shaking with fear, what she thought.

"There is no need to ask her," her mother declared. "She doesn't understand what we are talking about."

I thought that unlikely. We were sitting in the family room of a two-storey house in a village in Upper Egypt. Besides Olla and her daughter, Raaja, present were her mother-in-law, who nodded approvingly at everything she said, and three young teenage girl cousins.

What else would the girls talk about when they were alone but that single event that can traumatise them for life - the dread of the inevitable, the incomprehension as they are held down by mothers, aunts and grandmothers, the indescribable pain as the midwife takes a blade to the clitoris.

Astonishingly, in 21st Century Egypt, the latest figures suggest that more than 90% of the women have been subject to female genital mutilation (FGM). The figure comes from a Unicef approved survey carried out in 2008, the year that the practice was banned.

“ Some women say they won't have their daughters purified when the social worker is around. They humour her until she leaves and once she is gone they come and ask me to circumcise their girls. ”
Village midwife Om Mohammed
A new set of figures are due to be published later this year and doctors expect them to show a 10% decline. That still leaves the majority of women in Egypt exposed to unimaginable physical and psychological pain and denied what the rest of us would call a normal sex life.

The practice is not restricted to Muslims, as has often been claimed, but also carried out by Christians, who make up 10% of Egypt's population.

The practice predates the arrival of either religion in Egypt - there is evidence that it was practised back in Pharaonic times.

It is a deeply entrenched tradition, which is why it is proving so hard to eradicate.

Dr Randa Fakhr El Din of the Cairo Coalition Against FGM invited me to her surgery on the outskirts of the city, after dark when the last patient had left.

With the help of diagrams and photographs, she explained the difference between the Type 1 and Type 2 FGM routinely practised in Egypt.

She then showed me pictures of what can go wrong when amateurs wield the blade - infection, inflammation, giant cysts and injuries which can make it impossible to have a natural childbirth.

"Women dread the pain of sexual penetration," she explains, "but some girls die before they ever marry. There is an artery close to the clitoris. If the cut goes awry, many girls simply bleed to death."

Paradoxically, because of the ban, more girls are dying: "Their parents won't take them to the hospitals in case they get reported and imprisoned."

In the rural areas of Egypt, in Upper Egypt, however there is scant respect for the law. You hear the words "tradition", "custom", "honour" uttered like a mantra when people justify their decision to circumcise their daughters.

The belief there is that it is the female who is sexually rampant and that her sexual desire must be arrested at a young age, before she can disgrace the family.

“ If we tell a police officer in the local station, we will be reporting to an officer who believes in it and is probably doing it to his own daughters ”
Nivine Rasmi, anti-FGM campaigner
"It is important that she loses that part of her body that awakes sexual desire. If not, she may play with herself or ask a boy to touch this part for her, not specifically a stranger, but one of her cousins for instance, and she might enjoy it," Olla told me. "When she feels the pain of it she will be more careful about this part.

"I know the doctor might be punished for this, but still there are doctors who are practising it," she said. "And if the doctors won't do it then we will get the daya."

The daya is a local midwife. In Olla's village she is a large, shambling woman in flowing robes who passes through the streets with impunity.

Om Mohammed was totally uninhibited as she extolled to me the benefits of her work: "I love it like my own eyes because I need the money. Take me to prison if you want to, take me anywhere, but I will keep circumcising girls. I want the money.

"Circumcision is healthy for girls. I know this - purified girls grow taller and get marriage proposals, but unpurified girls stay short and stubby.

"Some women say they won't have their daughters purified when the social worker is around. They humour her until she leaves and once she is gone they come and ask me to circumcise their girls. I have her mother, her aunt or neighbour hold her while I cut her," she explained.

The interview was carried out in the hearing of members of the local NGO which, with the help of Unicef, is trying to eradicate the practice in the area.

"Why don't you simply take her to the local police station?" I asked them. "After all, what she is doing is illegal."

"Who are we going to report to?" Nivine Rasmi, one of the NGO workers, responded. "If we tell a police officer in the local station, we will be reporting to an officer who believes in it and is probably doing it to his own daughters."

I accompanied Nivine as she went from house to house in the village trying to persuade mothers not to mutilate their daughters.

Gamila, a Christian with two young daughters, is one of her successes.

"I have had problems in my sexual relationship with my husband because of it and so when she explained about the health complications and how it is not part of religious faith, I was ready to believe her. I now don't want my daughters circumcised," Gamila said.

“ Raising the issue is a problem. Even talking about sexual relations within marriage is not tolerated by members of our congregation ”
Reverend Yacoub Eyad of the Assemblies of God Church
We wove through the narrow streets, past donkeys and ducking under washing. At the sight of us the women scurried into their houses, the men stared at us with hostile aggression. A few asked what we were doing.

It is custom, tradition and religion that we are fighting, Nivine explained: "If a girl is discovered not to have been genitally mutilated on her wedding night, a husband or mother-in-law might demand that she is sent back to her family and her chances of marriage can be destroyed forever.

"We start by talking to religious leaders, Christian and Muslim alike, and try and get them to understand our point of view."

All the anti-FGM campaigners I met in Egypt spoke enthusiastically about the help they were getting from the educated classes, doctors, priests and imams.

In the nearby town of Akaka, the local protestant priest, Reverend Yacoub Eyad of the Assemblies of God Church, explained the difficulties of getting the message across: "Raising the issue is a problem. Even talking about sexual relations within marriage is not tolerated by members of our congregation. So we pray that God will help us in reaching people with this message."

The local imam, Rabea Taha Farag, spoke with equal determination and commitment: "In the past, the imam in mosques didn't have enough information on this issue, but now cultural and educational expansion have allowed people to know more and understand the wrong acts that were done before.

"We are here working hard with the NGOs on spreading the word of not having FGM. We are ordered by the Prophet not to do it."

However, when I spoke to the imam's superior, Sheikh Ashraf, who was visiting Akaka, about whether he was similarly enthusiastic about the local anti-FGM campaigns he thundered: "No, I am not. The Prophet has ruled that this thing must be done," before tearing the microphone from his white robe and walking angrily away.

Nivine Rasmi admits that the campaign is facing difficult times. The result of Egypt's first free, democratic elections has seen two thirds of the Lower House of Parliament dominated by Islamic parties - the Muslim Brotherhood and the more hard line Salafis.

"Of course we fear this new parliament won't tackle issues like FGM because already there are extremists who want FGM unlike the previous regime," Nivine said. "We know that there will be a decline in women and children rights with this new government and parliament."