Schoolboy was beaten 'for being a Muslim' 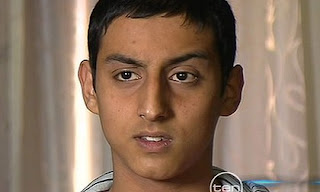 A schoolboy from Sydney's north was brutally bashed and verbally abused by more than 20 students for being Muslim, the boy has claimed. Hamid Mamozai, 15, was allegedly hit up to a dozen times by two fellow students at Asquith Boys' High School on Wednesday as several more cheered and hurled racial abuse from the sidelines.

"[They were saying] hit him more, hit him more, he deserves it, you terrorists, go back to where you came from, go blow something up," Hamid told Channel 10. He said he was kneed in the face four of five times and hit up to 15 times in the face. Hamid was taken to hospital unconscious and with internal bleeding but suffered no serious injuries.

Najia, Hamid's sister, said he had been subjected to racial abuse at the school for up to two years and was "emotionally and mentally sick" because of it. "The boy is scared ... he doesn't get out of the house," she said.

Asquith Boys' High declined to comment last night. In response to inquiries from the Herald, a spokesman for the Department of Education said one student had been suspended for 20 days and the police had been informed. Teachers provided immediate assistance to Hamid and called his family and an ambulance when the incident occurred, the spokesman said. Hamid and his family have been offered counselling and the school has arranged to meet with Mrs Mamozai this morning.

"Racism is not tolerated by Asquith Boys' High School, which disciplines students engaged in such behaviour and supports students subjected to it," the spokesman said. "Disciplinary action has been taken against students who have previously used racist language to the injured student. Due to the police investigation, it is inappropriate to comment further on the incident at this stage."