Poll: Many Americans uncomfortable with Muslims 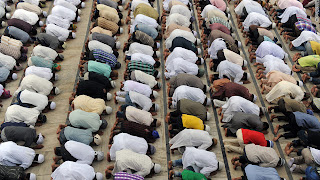 Ten years after 9/11, Americans are wrestling with their opinions of Muslims, a new survey found, and where Americans get their TV news is playing a role in those opinions.

Forty-seven percent of survey respondents said the values of Islam are at odds with American values.

The Public Religion Research Institute conducted the survey and issued a report in conjunction with the Brookings Institution, "What it Means to be American: Attitudes in an Increasingly Diverse America 10 Years after 9/11."

“Americans are wrestling with fear, but on the other hand they're also wrestling with acceptance,” said Robert P. Jones, CEO of the Public Religion Research Institute.

The results of the survey were announced Tuesday at the Brookings Institution in Washington.

One issue that seemed to divide respondents was sharia law.

Overall, 61% of respondents disagreed that Muslims want to establish sharia law in the U.S.

"2011 has been an enormously active year for this question," Jones said. "Forty-nine bills have been introduced in 29 states to ban sharia law. We asked the same question back in February, and only 23% of Americans agreed Muslims want to establish sharia as the law of the land. That number has gone up to 30%, so still a minority, but the minority has grown."

The numbers were also showed a correlation with where people went for their news.

Of Americans who say they trust Fox News the most for their television news, 52% believe that Muslims are trying to establish sharia law in the United States. Sixty-eight percent of Fox viewers believed the values of Islam were at odds with American values.

The report says fewer than one-third of Americans who most trust broadcast news, CNN (20%) and public television (23%) believe that Muslims are trying to establish sharia.

"It's an emotional roller coaster," said Dr. Muqtedar Khan, a professor of political science at the University of Delaware. "I looked at this survey, and I'm really depressed."

Khan, a practicing Muslim, was particularly disturbed by the attitudes toward Muslims and what he called a misunderstanding of sharia law. "Sharia is just a prop, an attempt to say, 'we just don't know and like Muslims.' "

Eighty-eight percent of those contacted by pollsters agreed that "America was founded on the idea of religious freedom for everyone, including religious groups that are unpopular."

One year after a Florida pastor burned a copy of the Quran, 95% of people polled said religious books should be treated with respect.

And two-thirds of those polled said there should be strict separation between church and state.

According to Jones, 2,450 Americans were reached by phone for the survey, and it had a margin of error of plus or minus 2 percentage points.