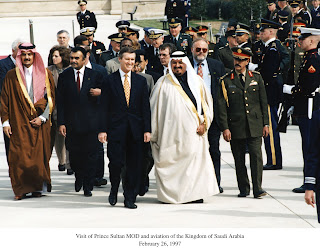 Saudi Arabia was yesterday drafting up to 10,000 security personnel into its north-eastern Shia Muslim provinces, clogging the highways into Dammam and other cities with busloads of troops in fear of next week's "day of rage" by what is now called the "Hunayn Revolution".

Saudi Arabia's worst nightmare – the arrival of the new Arab awakening of rebellion and insurrection in the kingdom – is now casting its long shadow over the House of Saud. Provoked by the Shia majority uprising in the neighbouring Sunni-dominated island of Bahrain, where protesters are calling for the overthrow of the ruling al-Khalifa family, King Abdullah of Saudi Arabia is widely reported to have told the Bahraini authorities that if they do not crush their Shia revolt, his own forces will.

The opposition is expecting at least 20,000 Saudis to gather in Riyadh and in the Shia Muslim provinces of the north-east of the country in six days, to demand an end to corruption and, if necessary, the overthrow of the House of Saud. Saudi security forces have deployed troops and armed police across the Qatif area – where most of Saudi Arabia's Shia Muslims live – and yesterday would-be protesters circulated photographs of armoured vehicles and buses of the state-security police on a highway near the port city of Dammam.

Although desperate to avoid any outside news of the extent of the protests spreading, Saudi security officials have known for more than a month that the revolt of Shia Muslims in the tiny island of Bahrain was expected to spread to Saudi Arabia. Within the Saudi kingdom, thousands of emails and Facebook messages have encouraged Saudi Sunni Muslims to join the planned demonstrations across the "conservative" and highly corrupt kingdom. They suggest – and this idea is clearly co-ordinated – that during confrontations with armed police or the army next Friday, Saudi women should be placed among the front ranks of the protesters to dissuade the Saudi security forces from opening fire.

If the Saudi royal family decides to use maximum violence against demonstrators, US President Barack Obama will be confronted by one of the most sensitive Middle East decisions of his administration. In Egypt, he only supported the demonstrators after the police used unrestrained firepower against protesters. But in Saudi Arabia – supposedly a "key ally" of the US and one of the world's principal oil producers – he will be loath to protect the innocent.

So far, the Saudi authorities have tried to dissuade their own people from supporting the 11 March demonstrations on the grounds that many protesters are "Iraqis and Iranians". It's the same old story used by Ben Ali of Tunisia and Mubarak of Egypt and Bouteflika of Algeria and Saleh of Yemen and the al-Khalifas of Bahrain: "foreign hands" are behind every democratic insurrection in the Middle East.

US Secretary of State Hillary Clinton and Mr Obama will be gritting their teeth next Friday in the hope that either the protesters appear in small numbers or that the Saudis "restrain" their cops and security; history suggests this is unlikely. When Saudi academics have in the past merely called for reforms, they have been harassed or arrested. King Abdullah, albeit a very old man, does not brook rebel lords or restive serfs telling him to make concessions to youth. His £27bn bribe of improved education and housing subsidies is unlikely to meet their demands.

An indication of the seriousness of the revolt against the Saudi royal family comes in its chosen title: Hunayn. This is a valley near Mecca, the scene of one of the last major battles of the Prophet Mohamed against a confederation of Bedouins in AD630. The Prophet won a tight victory after his men were fearful of their opponents. The reference in the Koran, 9: 25-26, as translated by Tarif el-Khalidi, contains a lesson for the Saudi princes: "God gave you victory on many battlefields. Recall the day of Hunayn when you fancied your great numbers.

"So the earth, with all its wide expanse, narrowed before you and you turned tail and fled. Then God made his serenity to descend upon his Messenger and the believers, and sent down troops you did not see – and punished the unbelievers." The unbelievers, of course, are supposed – in the eyes of the Hunayn Revolution – to be the King and his thousand princes.

Like almost every other Arab potentate over the past three months, King Abdullah of Saudi Arabia suddenly produced economic bribes and promised reforms when his enemy was at the gates. Can the Arabs be bribed? Their leaders can, perhaps, especially when, in the case of Egypt, Washington was offering it the largest handout of dollars – $1.5bn (£800m) – after Israel. But when the money rarely trickles down to impoverished and increasingly educated youth, past promises are recalled and mocked. With oil prices touching $120 a barrel and the Libyan debacle lowering its production by up to 75 per cent, the serious economic – and moral, should this interest the Western powers – question, is how long the "civilised world" can go on supporting the nation whose citizens made up almost all of the suicide killers of 9/11?

The Arabian peninsula gave the world the Prophet and the Arab Revolt against the Ottomans and the Taliban and 9/11 and – let us speak the truth – al-Qa'ida. This week's protests in the kingdom will therefore affect us all – but none more so than the supposedly conservative and definitely hypocritical pseudo-state, run by a company without shareholders called the House of Saud.