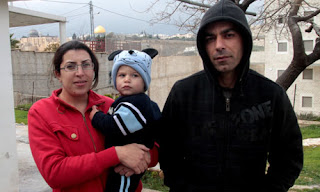 A Palestinian family in East Jerusalem have been ordered to evacuate a room in their home so Jewish settlers can move in, following an 11-year court battle waged by a pro-settler US millionaire.

Ahmed Hamdallah, 33, has been told to remove his furniture and possessions by Monday or he will be billed for the cost of bailiffs clearing a room occupied by himself, his wife and one-year-old son. New occupants will take over the property under the protection of armed guards, he has been told.

The Hamdallah family have lived in the home in Ras al-Amud since 1952. The extension, in which Ahmed, Amani and Yazan Hamdallah now live, was built in the mid-1980s.

However, the land on which the home is built was bought in 1990 by Irving Moskowitz, a Florida businessman, from its pre-1948 Jewish owners. Moskowitz has spent millions of dollars purchasing property in East Jerusalem to create pockets of hardline Jewish settlements in Palestinian neighbourhoods.

Hamdallah said he intended to destroy the extension, which has views of the Dome of the Rock and the Mount of Olives, rather than hand it over to settlers. "Do you think I will just give them the key? I'm not going to allow them to live in my house," he told the Guardian. "I have no power to do anything. I don't even have the strength to speak or eat or go to work."

Amani, his wife, said: "We have no plan, nowhere else to go." She said the main part of the house was already crowded with members of the extended family.

The Hamdallah family came to Ras al-Amud after fleeing their village near Ramle in the 1948 war. The house is now bordered on two sides by Ma'ale Zeitim, a housing development built on land also owned by Moskowitz in which about 100 Jewish families live and from which Israeli flags fly. Expansion of Ma'ale Zeitim is blocked by the presence of the Hamdallah home.

A Jerusalem court ruled in 2005 that the family could retain buildings constructed up to 1989. However, according to the Hamdallahs' Israeli lawyer, Shlomo Lecker, Moskowitz's legal representatives have continued to press for evacuation of the extension and yard, and bailiffs this week served notice of eviction for Monday.

"This group of settlers are very determined to get the family out and they are trying every possible trick," he said. "They got an order allowing the settlers to come to the house and take over the room and the yard."

Lecker said he was challenging the decision.

Daniel Luria, spokesman for Ateret Cohenim, which promotes Jewish settlement in East Jerusalem, said: "We're talking about one of the most significant areas historically and religiously for Jews. Jews have the right to live in any neighbourhood. The fact that the world does not recognise that is a problem that the world has got."

About 200,000 Israeli Jews live in settlements in East Jerusalem, which was captured by Israel in 1967 and later annexed. Settlements in occupied or annexed territory are deemed illegal under international law.

A confidential EU report on East Jerusalem, circulated in December, warned that ideologically-driven settlers were threatening the prospects of a peace deal. "If current trends are not stopped as a matter of urgency, the prospect of East Jerusalem as the future capital of a Palestinian state becomes increasingly unlikely and unworkable," it said.