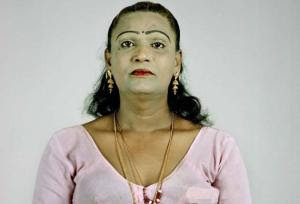 On the streets of Kamathipura young women stand ready and available, looking to lure their next customer. They pose, they smile, some wave. They look terribly young, their faces heavy with make-up. Many are dressed in Western clothes, others in traditional saris. In this red light district of Mumbai, they stand on the kerbside in front of grimy shacks containing the beds on which they do their work. There is the hustle and chaos of the traffic, the clogged roads, the constant noise. And there is terrible sadness too.

"I was tricked here. I was in love with a man and I came here with him. But when I got here, he sold me," says Simla, a 42-year-old prostitute, originally from Nepal. She has two children and she saves what little she earns to send them to school, desperate that they do not follow her into the sex industry. "I was fooled into this. I will not allow my children to do it."

Sex costs little on the frenetic streets of India's business capital, where people come and go all the time. New arrivals wash up from India's poor rural hinterland, desperate for work, any sort of work. Men – who are used to a repressed, conservative culture – come and stand and stare. There is a near-constant flow. A young woman might be able to charge a customer 100 rupees (£1.30) a time, but an older woman might only get 30 rupees (40 pence). When a woman demands that a customer use a condom, the price is usually lowered as a result.

These women and their customers are at the forefront of India's Aids crisis. The country has up to three million people living with HIV, the third-highest total in the world. Experts say that the most important danger in the spread of HIV comes from the relatively high numbers of men who go to sex workers, who do not use condoms and whose jobs involve them travelling. As a result, both sex workers and India's legions of horn-blaring truck drivers are among the groups most persistently targeted by health workers and educators trying to push the message of safe sex.

"You can educate children in schools about safe sex but the people who need to be targeted the most are the sex workers themselves," says Penny Richards, the communications director for the Avahan India AIDS Initiative, funded by the Bill and Melinda Gates Foundation. "The other group in need of education are men who have sex with men."

The sex workers of Mumbai have long attracted the interest of photographers. In the early 1980s, the distinguished American photographer Mary Ellen Mark spent weeks on the city's Falkland Road, one of the poorest red-light districts. Initially suspicious of her, the sex workers gradually came to trust the American and invited her into their homes. Her now-famous and unsettling collection of photographs is titled after the street on which the women work.

By contrast, when he set about working on the collection of images published on these pages, the photographer (and longstanding contributor to The Independent Magazine) Kalpesh Lathigra wanted to portray the women (who included some hijras, or eunuchs who dress and identify themselves as female) outside of their usual environment. Working with a friend, he arranged to hire a studio in Mumbai in which to photograph them. As it transpired, the studio was only a short distance from the area in which the women worked. But despite the geographical proximity, it was a world apart. The results were dignified and powerful.

"They were really surprised that I wanted to take their photographs in the studio and not in a brothel," Lathigra recalls, "but I did it because I wanted to isolate the women visually in a direct way. The photographs are for me a way of breaking away from visual clichés – and more importantly, a way of breaking away from the taboos and stigma of HIV, which in India are still very prevalent."

"Whenever photographers go to the red-light areas, they are always taking their pictures in the street. It is not easy. And you'll get tourists coming and taking pictures as well. So when I told them I wanted to go the studio they were surprised, but they were also really positive. I think they understood what I was trying to do."

As well known as it is for its sex workers, Mumbai is also famed for its terrible traffic, its almost constant gridlock and the persistent building of new roads and flyovers. Amid this twisting jungle of fast-setting concrete and blinding headlights, it was not difficult for Lathigra to discover an impromptu truck stop where drivers gathered for rest and relaxation.

There is an aura of slight menace to some of the images he took there of the truck drivers but there is also a sense of weariness about these men of the road. Standing in front of their brightly painted rigs – which are themselves the constant menace of India's roads – the men also look a long way from home. A long way from their families, from their wives.

There are new challenges for the changing India as campaigners seek to make the world's largest democracy (with a population of more than 1.1bn) wake up to the threat of Aids. Some experts, for example, believe that the rise and rise of the booming information-technology industry – and, in particular, of the call centres that service clients on the other side of the world – that represents the emerging threat to watch.

Warning of the menace of so-called "call-centre romeos", men who make use of the cramped working conditions and night-shift hours to snare young women, Dr Suniti Solomon says the profile of those who carry the HIV virus is changing. Dr Solomon, who is from Chennai and who detected India's first-ever case of Aids in 1986, explains: "Men and women are entering the workplace for the first time. Often they are coming from outside the urban areas. They are getting a good salary; it's a nice atmosphere. They are away from their parents and they have more freedom."

Yet on the streets of Kamathipura, campaigners have had success in educating the women of the red-light area about their circumstances and what they can do to protect themselves. In addition to education about safer sex, a number of schemes have been set up to help the economic circumstances of the women.

A cooperative bank, established by the charity Population Services International, which allows women to deposit small amounts of money is one such example. Saving even a few rupees here and there means the women can remove an element of desperation from their daily lives. "It means," says Indra, a sex worker from the southern state of Karnataka, "that I can say, 'No', if a customer does not want to use a condom."

For more information, see concern.net
Posted by Zafar Khan at 09:39