My awkward moments in Muslim prayer 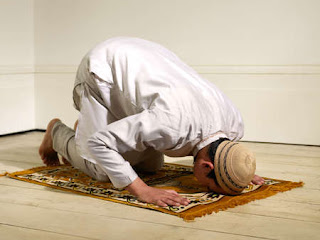 A Muslim who prays in public is like James Bond, but without the bling, sophisticated gadgets and entourage of gorgeous women eager to bed him. Both brilliantly fail at every attempt at stealth. Like the fictional secret agent, a Muslim, despite his best intentions and clandestine efforts, sticks out like a pink elephant when forced to offer his ritualistic prayer, salat, outside the comforting cocoon of his home or mosque.

Contrary to the fear-mongering asserted by professional Islamophobes, Muslim Americans do not wish to impose their religious practices and beliefs upon their non-Muslim neighbors. The reality is that most of us are simply trying to navigate the sometimes tricky -- but often entertaining -- balancing act of adhering to our religious values and rituals while avoiding societal awkwardness and being seen as modern-day Boo Radleys.

Each time I have to pray and am unable to find a secluded spot, I would love for a magic Muslim portal to open and take me away to a fantastic Greyskull castle. Here, I could pray in solitude, shielded from the curious eyes of fascinated and horrified observers and ride on an armored tiger named Battle Cat while drinking mango lassi from a diamond-encrusted goblet.

Unfortunately, I live in reality.

Instead, I discover I have 15 minutes left to pray the afternoon Asr prayer and I'm stuck in a crowded, Valley Fair mall in San Jose, Calif. Realizing that I'd probably be tazed and shot by Homeland Security if I decided to bust out my Arabic tai chi at the Orange Julius, I seek temporary refuge for my prayer woes in the most obvious location: the fitting room at the Gap.

I enter the clothing metropolis in a frantic state and pretend to peruse the fine clothing merchandise. I randomly pick up some accessories and head toward the fitting room stalls only to realize that I am holding skinny female jeans and a Size 2, purple dress. I hastily dump the incorrect clothing on a wooden bench -- making sure no one saw me -- and run to the men's section. I decide to play "pretend" and pick up hip, expensive clothing I'd probably never wear in real life and lug the stylish suit, jacket and jeans to the fitting room.

After waiting five minutes due to the long line, the ridiculously good-looking female employee directs me to a fitting stall. I cannot bring myself to make eye contact with her lest I confess my ruse. I rush into the stall and hang the clothes on the wall and devise a complex and sophisticated strategy to secretly pray while "pretending" to try on hip, urban garments. I make sure to create as much noise as possible when changing my pants from the brown, Docker, uncle khakis to the hipster jeans so they don't suspect my celestial intentions.

I leave the rumbled pants on the floor, along with my shoes and my outer shirt, as visible signs of evidence that I am indeed using this fitting room for normal fitting room purposes.

Now, all I have to figure out is which way is Northeast, because Muslims pray toward Mecca, and this event occurred BIP -- before iPhone. I basically do an "eeny-meeny-miney-mo" with the four corners and go with my "gut," and decided "Mecca" was probably somewhere in the corner nearest to the stall door.

All is well until the prostration, where Muslims have to touch their forehead and nose to the ground. As I'm about to go to the floor, I was overwhelmed with a sense of comfort -- I honestly thought I had created a successful camouflage using limited means with limited time. I felt proud and complimented myself on being a pretty dope, on-the-fly, Pakistani, Muslim American James Bond.

My head and knees are now on the floor next to the gap in the door, and everything is going smoothly. I glance to my left and the Gap employee, having bent down, is now staring at me and asking, "Sir, is everything all right?"

I quickly finish my prayer, mumble, "Everything is fine! Just fine!" I change my clothes and exit the door to find two Gap employees and a several customers staring at me with concern and confusion in their eyes.

And I peace out like Flash, running for the exit door and deliberately trying to get lost in the crowd and become a brown blurry dot so as to outwit the imagined Gap security chasing after me.

Other classic awkward moments include the following memorable gems:

• The San Francisco Abercrombie and Fitch fitting room where the ridiculously good-looking female employee again asked me, "Are you OK?"

• The Century 21 Winchester movie theater parking lot, where hundreds of movie patrons exited the packed screening of "Mission Impossible 2" only to find three brown men praying outside the exit door, next to the garbage cans. (Thank you, Adil, for that brilliant idea.)

• The allegedly dark, closed-off corner in AMC Metreon in San Francisco while waiting in a crowded line to see "The Lord of the Rings" -- the corner was neither dark nor closed-off, and you can imagine the rest.

• Praying as a group along with several brown friends during the seventh inning of an Oakland A's baseball game in between a closed-off escalator and a hot dog stand, and protected by an African-American park employee who said, "You all go ahead and pray. I was married to a Muslim man ... once."

• And, finally, my favorite was our extremely well planned and brilliantly executed two-minute prayer drill while visiting Alcatraz prison. We found a hidden room with antiques and I was the initial watchman, standing outside the door, vigilantly keeping an eye out for the tour group that was hovering around the corner about to bust in on our private prayer session.

In the years since these colorful incidents, some confused and ignorant Americans have begun protesting the construction of mosques in America, citing their presence as fundamentally alien to American values and proof of a Muslim takeover. Along the way, these misguided individuals seem to have forgotten the First Amendment and cultural values celebrating diversity and freedom of religion. Preventing the construction of mosques (like the recent controversy in California) will have no effect on stealth jihadists. However, it will unleash a far greater problem for America: a horde of Muslim Americans awkwardly praying in public.