No bride beautiful enough for Kadyrov 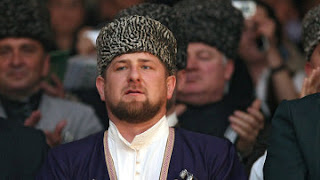 Ramzan Kadyrov, head of the Chechen Republic and Moscow’s strong arm in the Caucasus shares his views on women, libido and public order.

Kadyrov has courted controversy over his firm views on Muslim morals, with acrimonious rebukes swirling over a widely discussed headscarf policy.

But he cited Sharia law when he said he would personally be happy to take on another wife, if only he could find the right woman for the role.

“If there is love then you can have four wives…Everyone thinks this is crazy, how can you have four wives? If you have the chance to build a house, create equal conditions, do not infringe anyone’s rights, then under Sharia law you have the right to marry four times,” he told Komsomolskaya Pravda.

“It’s a lot more honest than carrying on with one or two lovers, when you have problems at home and can’t feed your children,” he maintained.

“But you can only marry a second wife with the permission of the first wife,” he added.

And he is in the marriage market himself, “I am always looking, but I can’t find anyone beautiful enough. If I do I will marry straight away,” but only with the permission of the wife he already has, he says.

After almost 80 years of secular state there is now growing pressure for women in Chechnya to cover up their heads, the Financial Times reported. A direct law enforcing this is against overriding federal law and Grozny says the scarves are not mandatory.

But they are making a comeback and human rights activists like Tanya Lokshina of Human Rights Watch puts responsibility at Kadyrov’s feet.

She earlier told The Moscow News about “his infamous scarf and hat policy.”

“I do not have the right,” he said of his reported headscarf policy. “In my family circle, yes. But I can only advise. They say that Ramzan Kadyrov signed an order. There is no order, it is all nonsense. I said that half naked women should not go around at work.

“There must be a strict dress code. If, for example, a woman deputy minister is going to walk around half naked and with her hair down then none of us here in the Chechen republic will be able to get any work done,” he said.

That, apparently, is due to the healthy sexual appetites of the lusty local menfolk.

“Caucasians are hot lads, who lead a healthy lifestyle. So when a woman is half naked we get excited and cannot get on with work,” he claimed.

Claims that young women who did not wear headscarves were shot with paint balls were untrue, he said. “We found no statements about this, we looked… Maybe it was just an isolated instance of hooliganism,” he said.