Comment: Much as I respect PM Erdogan and my Turkish brothers and sisters, I feel they are a bit deluded about their 'glorious' history and empire, like all empires and imperialists the Ottomans had many faults including engaging in slavery and debauchery among many other affronts to Islam and humanity. Not to mention the disgraceful fraticide they practiced...and yes Indian Muslims (Mughals) were no better. 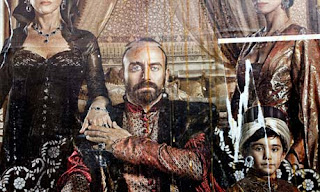 For the show's producers, it is nothing less than a magnificent controversy. Muhtesem Yuzyil, or Magnificent Century, a lavish primetime soap opera about Suleiman the Magnificent and Hurrem, the slave who became his powerful wife, is as admired in Istanbul as it is reviled.

Suleiman ruled the Ottoman Empire from 1520 to 1566 at the height of its glory and is still revered as Kanuni, or Lawgiver. This has led to the series attracting a wave of protests from irate viewers and even government officials. Critics said it was disrespectful to the sultan because it showed him drinking alcohol – banned in Islam – and womanising with concubines in the harem. They have also complained that its scriptwriters take liberties with historical events and depictions of royal lives.

However, despite warnings from the government media regulator – or perhaps because of them – ratings for the weekly show remain sky high. After receiving what it said were more than 70,000 complaints when the drama first aired in January, Turkey's Supreme Board of Radio and Television, known as RTUK, said that Show TV, the channel broadcasting the series, had wrongly exposed "the privacy of a historical person" and owed the public an apology.

Even the prime minister, Recep Tayyip Erdogan, who leads Turkey's Islamist-rooted government, weighed in, calling the programme disrespectful and "an effort to show our history in a negative light to the younger generations". Dozens of egg-throwing protesters chanted "God is great" outside the Show TV studios and descendants of Suleiman vowed to produce a series of their own to set the record straight.

However, knowing exactly what went on in Ottoman times is a challenge, especially with regard to women, according to Leslie Peirce, professor of Ottoman studies at New York University and author of The Imperial Harem: Women and Sovereignty in the Ottoman Empire. "In the Ottoman era, polite society did not talk about women and they wrote very little about them. So we don't have any Ottoman saying, 'This is how the harem worked'," she said. "We get these stories from the Europeans.

"There's a whole lot we don't know about Hurrem and other successful products of the concubine track, so the producers would have to invent plausible scenarios there."

According to reports by Venetian diplomats of the time, Hurrem, known in Europe as Roxelana, was "one clever lady", said Peirce. "She did play the politics, but mothers of princes were expected to do that. She acquired a public political role that no woman had had before, and she is the model for the queen mothers, or valide sultans, who come after her."

RTUK has been known to ban or suspend programming it deems offensive, but thus far Magnificent Century has survived, though not without an initial frenzy of edits to shorten kissing scenes and rewrites of later episodes. Meral Okay, the screenwriter, said viewers were angered by the portrayals of the inner workings of the royal court.

"We have been saying the same thing from the start: this is a fiction inspired by history," Okay told Reuters last month. "By entering the harem, we made all those untouchable and respected characters of history closer to us. We gave them a material existence as humans, with fears, anger and passions."

The production company, TIMS Productions, said the show handled "criticised topics" in a sensitive manner, and accusations that it had misrepresented the Ottoman royalty were unjust. "With the decor, costumes and visual effects, Magnificent Century is one of the most ambitious series in Turkish TV history," it said. Producers also added that the actor's goblet contained fruit juices rather than wine.