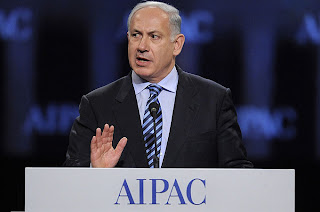 At last the United States is responding to Israeli Prime Minister Binyamin Netanyahu's refusal to freeze settlements and re-start negotiations with the Palestinians.

Congressman Howard Berman (D-CA), chair of the House Foreign Affairs Committee, rushed to the House floor with a resolution drafted by the American Israel Public Affairs Committee [AIPAC] condemning the Palestinians for publicly suggesting that, in the wake of Netanyahu's refusal to freeze settlements and negotiate, they will consider a unilateral declaration of statehood.

Congress passed the Berman bill, drafted only this week, on Wednesday. When it comes to pleasing AIPAC, there are simply no limits.

This remains true even though AIPAC is embroiled in an espionage/sex scandal that has it scrambling to find $20m to pay off a former top employee who is threatening to produce documents exposing the lobby.

The Berman bill passed overwhelmingly because that is how things work in a city where policy is driven by campaign contributions — and not just on this issue.

The only difference between how AIPAC lobbyists dictate US Middle East policy and pretty much every other major lobby is that AIPAC works to advance the interests of a foreign country.

In other words, comparisons to the National Rifle Association [NRA] would only be applicable if the gun owners that the NRA claims to represent lived in, say, Greece. Oh, and NRA-backed bills usually take longer than a day to get to the House floor.

And here you have the root of the problem. And it is not just an American problem. It is just as much an Israeli problem, a Palestinian problem, and an international problem.

There is only one reason that Israeli-Palestinian negotiations collapsed. It is the power of the "pro-Israel lobby" (led by AIPAC) which prevents the United States from saying publicly what it says privately: that resolution of a conflict which is so damaging to US interests is consistently being blocked by the intransigence of the Netanyahu government and its determination to maintain the occupation.

This is not a situation where responsibility attaches equally to both sides. The Israelis hold all of the disputed territories. Yes, the Palestinians have administrative control of some parts of the West Bank but its authority — and it is very small — derives from the Israelis.

Gaza is controlled by Hamas but it is a reservation or ghetto, not a free entity. Its borders are entirely blocked by the Israelis (and the Egyptians who do whatever Israel demands on their border with Gaza).

It remains under Israeli blockade, lightened only a bit since Prime Minister Netanyahu admitted that the blockade was not necessary for Israel's security. And then there is Arab East Jerusalem, where the Netanyahu government has expanded efforts to push Palestinians out of their homes and replace them with settlers.

The Palestinians have no power at all although they have done everything that Israel and the United States demanded.

The Palestinian Liberation Organisation (PLO) fully recognised Israel and pledged itself to fighting terrorism and resorting exclusively to negotiations to achieve a state. They agreed that their state would be limited to the 22 per cent of historic Palestine that is the West Bank, Gaza and East Jerusalem — recognising that Israel would have the other 78 per cent.

Even Hamas, which still insists that Israel has no right to be there, says that if the Palestinian Authority negotiates a deal with Israel that is accepted by the Palestinian people, it too will join in and end its war with Israel.

And what has Israel offered in exchange for these historic concessions? Absolutely nothing.

Yes, it has played at negotiations.

Israel's advocates argue that, at Camp David in 2000, it offered the Palestinians 94 per cent of the 22 per cent or 98 per cent or whatever.

Netanyahu's current offer is 60 per cent of the 22 per cent. But the supposed offer came with the standard conditions and caveats when there should be only one condition. In exchange for a Palestinian state in the West Bank, Gaza and East Jerusalem, the Palestinians must agree to absolute security for Israel with ironclad guarantees backed up with surveillance systems to ensure that there are no violations.

In fact, the Palestinians agreed to those terms as far back as the Yasser Arafat era, when, in the late nineties, Israelis and Palestinians adopted a security plan brokered by the CIA to combat terrorism.

President Arafat's efforts were so thorough, fighting a virtual civil war with Hamas, that Prime Minister Netanyahu told Arafat both in person and by telephone how much he appreciated Arafat's help.

But neither Arafat nor his successor, Mahmoud Abbas, got anything in return.

That nothing is easily defined. During the entire 17-year period since the historic Rabin-Arafat agreement — and the famed handshake on the White House lawn — the Israelis never ceased confiscating land and building settlements in the areas that are supposed to constitute the Palestinian state.

That was and is the clearest measure of Israel's intentions. The Israeli government does not intend to give up territory it wants; it gave up Gaza because it decided that it better served Israeli interests to just blockade it.

Why would Palestinians believe that Israel is negotiating seriously when it keeps building inside the future Palestinian state?

All this is obvious to anyone paying attention — especially since Prime Minister Netanyahu absolutely refused to freeze settlements for even 90 days in exchange for the United States doubling the aid package. Really, if he won't freeze for 90 days for $3.5bn, only a fool would believe that he would ever actually give up any land permanently.

And yet the United States government keeps playing this game. No matter what Israel does, it is fine by America.

It does not have to be that way. If the administration and Congress put US interests (and Israel's too) over the craving for campaign contributions, the United States could tell the Israeli government that, from now on, our aid package comes with strings.

Like a loan from the International Monetary Fund (although aid to Israel is a gift, not a loan), the US could say that in exchange for our billions, our UN vetoes of resolutions criticising Israel, and our silence in the face of war crimes like Gaza, we want Israel to end the occupation within, say, 24 months. And Israel would have to comply because our military assistance is, as AIPAC likes to call it, "Israel's lifeline".

If we did that, many Israelis would be very angry (just as many would appreciate America forcing an end to the occupation).

But the lobby would be furious because, above all else, it needs to feel that it controls US policy in the Middle East. Not for America's sake. Not for Israel's. But for its own. As with most Washington lobbies, it is not in business to make the world a better place. It is not pro-Israel; it is pro-AIPAC.

When will all this change? Who knows?

The AIPAC scandals are weakening the group, although not enough to prevent Congress from passing its latest bill condemning Palestinians. And younger American Jews, especially progressives (which is most of them), simply don't buy the AIPAC line. American Jews are, after all, Americans.

But, for now, the bottom line is money. The US government dances to Israel's tune because it is afraid to risk campaign contributions from a few dozen fat cats. That is the whole story.

Meanwhile, as General David Petraeus has said, US interests — including the lives of our men and women in uniform — are threatened by the belief in the Middle East that United States is Israel's puppet. Petraeus' view is common throughout the military which, unaffected by politics, manages to actually see the obvious. When will the rest of our government allow itself to do the same?