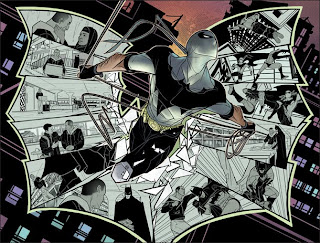 A conservative blogger who earlier sounded the alarm about the perceived attack on the tea party movement in Captain America and warned of the “anti-American nihilism” of Watchmen has now turned his attention to Bruce Wayne’s recruitment of a Muslim to be the Batman of Paris.

But Nightrunner, the parkour-trained crimefighter introduced in this month’s Detective Comics Annual #12, isn’t just any Muslim — he’s a 22-year-old Algerian Muslim living in Clichy-sous-Bois, the poor commune east of Paris best known outside of France as the epicenter of the 2005 riots. And that doesn’t sit well with Warner Todd Huston.

“You see, DC Comics has decided that the ‘French savior,’ the French Batman is to be a Muslim immigrant,” Huston writes on his Publis’ Forum. “The character’s name is Bilal Asselah and he is an Algerian Sunni Muslim and an immigrant that is physically fit and adept at gymnastic sport Parkour. Apparently Batman couldn’t find any actual Frenchman to be the ‘French savior’.” What constitutes an “actual Frenchman” isn’t entirely clear, but presumably the writer is referring to one of the “Frenchmen of European stock” he mentions later.

Huston takes aim at David Hine’s story, which centers on a series of political assassinations that lead to riots by communist union members and neo-Nazis, describing it as “PCism at its worst”: “The whole situation is a misreading of what ails France. The truth is, neither communist Union members nor ‘Neo-Nazi’ Parties are causing riots in France. Muslims are. Yet DC Comics is absurdly making a Muslim immigrant the ‘French savior’?” He accuses the publisher of badly downplaying in Nightrunner’s origin “the seriousness of the actual racial tension in France” and oversimplifying the problems “as mere racism as if that is all there is to it ignoring the fact that Islam is the single most important factor in the strife.”

He isn’t alone in his criticism; he’s merely picking up the baton passed by far-right commentators like Avi Green who, writing last week at The Astute Bloggers — a site dedicated to “exposing leftist propaganda,” “highlighting under-reported news” and “promoting universal human rights” — said, “How about that, Bruce Wayne goes to France where he hires not a genuine French boy or girl with a real sense of justice, but rather, an ‘oppressed’ minority who adheres to the Religion of Peace. And this is a guy whose very parents were murdered at the hands of a common street thug!”

So while Huston isn’t the only defender of the, I don’t know, wounded honor of “actual Frenchmen” in this manufactured controversy, he may be among the most widely distributed. Commentary from his Publis’ Forum regularly appears at other conservative outlets, such as Andrew Breitbart’s network of websites and Canada Free Press. His Feb. 8 column about Captain America #602 was followed by FoxNews.com’s article about the comic’s “tea party jab” which, in turn, triggered more widespread coverage.

Huston characterizes DC’s decision to make “a Muslim in France a hero when French Muslims are at the center of some of the worst violence in the country’s recent memory” as “PCism run amuck.” It’s apparently part of the “PCing of the American comic book industry” that includes the Captain America-tea party incident, the introduction of gay character Kevin Keller in the pages of Veronica, and … Larfleeze? That’s right, Agent Orange.

Andrew Belonsky at Death and Taxes, who was among the first to pick up on the reaction to Nightrunner, views it in light of the recent calls for a boycott of Marvel’s Thor movie because black actor Idris Elba was cast as the Norse god Heimdall:

The Nightrunner controversy differs a bit from the Thor scandal seen earlier this week. In the Thor scenario, the Council [of Conservative Citizens] wasn’t saying black people can’t be heroes, period. They simply don’t want to see Idris Elba in a specific role.

“It’s not enough that Marvel attacks conservatives values, now mythological Gods must be re-invented with black skin,” they said. “It seems that Marvel Studios believes that white people should have nothing that is unique to themselves.”

It’s a discriminatory, myopic view, yes, but not nearly as narrow as the one The Astute Bloggers trumpet. Green and his colleagues assume Muslims can’t be heroic because they’re inherently villainous and out to spread “Islamic supremacism.”

Nightrunner’s introduction continues in Batman Annual #28, in stores this week