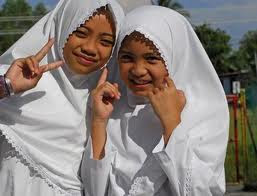 Baber Ibrahim, in his Guardian piece, “This Trend of Young Muslim Girls Wearing the Hijab is Disturbing,” propagates a hodgepodge of observations and speculations about why there is apparently a visible increase in the number of little girls (under the age of ten) donning the hijab. He claims that wearing one at this age leads to the sexualization of girls, which runs opposite the goal of observing modesty and humility. I would call that claim fair only because of the hegemonic sexualized worldview of typically everything related to gender issues in Islam.
Still, Mr. Ibrahim offers an over-simplified survey of the scene. Examining this trend from a sexual perspective alone easily delegitimizes those situations in which girls choose to wear the hijab. It is entirely possible that an eight-year-old girl can elect to wear the hijab, not because she is aware of her sexuality, but because she wants to emulate her mother, sport what she considers a flattering accessory, or fulfill what she believes is a spiritual obligation to God.

We cannot confuse “imposition” with “encouragement.” Again, there may be cases where little girls are indeed coerced; this of course ultimately cancels out any sort of religious or spiritual component, since Islam teaches that there is no compulsion in religion. But this must be juxtaposed with the other reality that Mr. Ibrahim himself points out - that of parents wanting their kids to “get used to doing the right thing from a young age.”

The “right thing” is of course arbitrary, but the consensus suggests that the “right thing” is a sense of living life with honor and dignity - and that honor comes from a set of values promoted by a moral code. Shouldn’t parents inculcate this set of values within their children starting from a young age? And yes, honor and dignity can be taught through other ways too; hijab, through its tangible and emblematic significance, is but one way to teach such values.

One of Mr. Ibrahim’s more misleading claims is that “…Getting a little girl ‘used to’ the hijab effectively obliterates the free choice element by the time the girl is old enough to think.” There are many religious practices and principles that my family instilled in me while I was growing up, but these patterns of thought or behavior did not prevent me from exercising my choice as I grew older. Becoming accustomed to something doesn’t necessarily mean that the person remains perpetually chained to that habit or idea, never evaluating it from a critical eye. Even girls between the ages of five and fourteen who went to private Islamic schools and wore hijabs as part of their uniforms can and do elect to wear them as young adults.

Ibrahim sympathizes with the brothers of the ‘poor, covered girls,’ “…it is only natural that they grow up with the concept that women have to be covered, controlled and restricted.” He sets up an inaccurate line-up of the most contentious, but unfortunately common, descriptives within this discussion: “covered, controlled, and restricted” - as if they naturally go together. Covering is not a synonym for controlling or restricting; that is, again, unless you are only examining this phenomenon from a sexual point of view.

And when it comes to the psychology of these little girls, it is important to understand how imitation plays a role in their development. Imitation is the dominant survival method for children, “even if the actions don't make sense,” according to a recent study by Australian researchers. Based on this idea, most Muslim female eight-year-olds are likely not aware of their own sexuality when they mimic their parents or close family and friends who cover.

I agree that imposing hijab on a little girl indeed deprives her of her childhood and freedom of choice. However, there is nothing wrong with parents encouraging their little girl to wear hijab or the child herself making a conscious decision to don the headscarf and perhaps experiment. While I do not condone the observation of this religious practice according to peoples’ whims and capricious desires, an innocent child has the right to explore this unique article of clothing and what it symbolizes.

Childhood is defined by trials and errors, experimentations and investigations. Mr. Ibrahim is not wrong then in calling this a trend amongst little girls, because trends are, by definition, popular movements at a “given time.” In other words, they are susceptible to change.

Finally, if we are trying to measure the popularity of hijabs among little girls, then we might naturally ask, why is hijab becoming more common amongst adult women whom these girls are likely imitating? A rise in religious education? A spiritual awakening? The convergence of religion and media? Unfortunate despotic rule? Or conversely, democracy? Whatever the reasons, these observations warrant examination from a perspective other than sexuality.