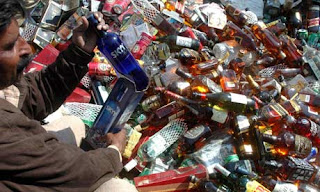 The Pakistani banker told his story nervously, kneading his hands as he spoke. His wife had deserted him, his family was furious, and his career had stalled. "My problem is whisky," he said, shaking his head with regret.

The 32-year-old professional was sitting in an addiction clinic, hidden down a quiet street in the capital, Islamabad. He had relapsed from the expensive treatment programme twice already; now he had been dry for more than three months. "This time it's for good," he said, with just a glimmer of self-doubt.

Pakistan has been dry for much longer – since 1977 – and drinkers risk severe punishment: 80 lashes of the whip under strict Islamic laws. But the law is ignored, alcohol is widely available and, for those who go too far, addiction clinics offering help are quietly flourishing.

"There's plenty of business," said Dr Sadaqat Ali, a leading addiction counsellor whose chain of clinics treated 500 alcoholics this year. Dr Ali estimates that 10 million Pakistanis drink alcohol, 1 million of whom have a problem. "With our culture of hospitality, it's hard to say 'no'," he said.

Earlier this month cricket authorities mounted an investigation into claims that a national player, Mohammad Sami, was involved in a drunken brawl in a Rawalpindi hotel. The 29-year-old test bowler denied he had been drinking, calling the row a "misunderstanding".

Demand for alcoholism counselling is so brisk that many clinics now take out prominent newspaper ads, some depicting a depressed man nursing a glass of scotch – a rare public nod towards a thinly veiled drinking culture.

Waiters serve scotch on the sidelines of society weddings and corporate functions; ministers drink openly at functions but hide their glasses when photographers come round. Bootleggers offer home delivery, so that ordering a bottle of booze is as easy as calling for a pizza, and likely to arrive more quickly.

The last time a Pakistani drinker received 80 lashes was under the Islamist dictator Zia ul-Haq in the 1980s; these days the culture has changed. Former president Pervez Musharraf made little secret of his fondness for a drink; neither does his successor, Asif Ali Zardari.

The less well-off drink homemade hooch, which can have a nasty kick: three years ago 50 Karachi residents died, and more went blind, from a bad batch of moonshine. But for the rich, the risk is in drinking too much of the good stuff. Dr Ali has counted bureaucrats, politicians, army generals and even the families of mullahs among his clients. "That's our target market. We call it the golden triangle: rich, educated and influential," he said.

Treatment is expensive by local standards, typically costing upwards of £85 a night. It's not quite the Betty Ford clinic: clients stay in a modest room and are forced to engage in intense counselling involving their own relatives. Controversially, some clinics have engaged in "forceful" interventions, drugging alcoholics at the instigation of desperate relatives to kickstart the cure.

The other option is Alcoholics Anonymous, which has at least one group in Karachi. Unlike the clinics it is hard to find: no ads, no phone numbers, just a simple web page. "Most people find it through word of mouth," said a former member, adding that it has operated for more than 15 years.

Some years ago a handful of parliamentarians argued for a reversal of the alcohol law, but with the rise of the Taliban such talk has receded: in 2007 a suicide bomber set off his device outside a beer shop in the Islamabad Marriott Hotel.

Alcoholics seeking help require discretion. But in Pakistan's small middle class, that can be tricky. The former AA member recognised several other members at the meeting: "It should be called A, not AA, in Pakistan – because there's not much anonymity."