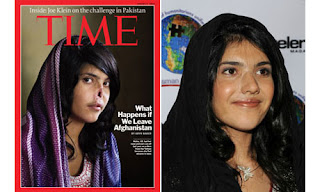 In 1985, at the height of the Soviet suppression of Afghanistan, National Geographic ran a cover photograph of a stunning Afghan girl. She had no name, but her haunted, mesmerising green eyes and her dramatic features framed by a crimson head shawl, seemed to capture a story of suffering, lost innocence and unrealised potential that went far deeper than the experience of just one girl.

Twenty five years later, Time magazine ran a cover of another beautiful Afghan girl. She too had captivating eyes – brown, not green – lustrous black hair and a striking expression. However, what gave the photograph its narrative and political power was something that was missing from her attractive physiognomy: her nose.

In its place was a yawning hole, a hideous second mouth in the very centre of her face. If those eyes in that now famous National Geographiccover spoke so eloquently of a forsaken nation's plight, then what did this grotesque wound say about the state of the country in 2010? ForTime the answer appeared to be in the cover line, which referred to the debate about the continued presence of Nato troops: "What Happens if We Leave Afghanistan". There was no question mark.

The girl without the nose was Bibi Aisha, an 18-year-old from the southern Afghan province of Oruzgan. In 2009 she had fled her husband's house, complaining of beatings, maltreatment and a life, not uncommon among women in Afghanistan, that amounted to abject slavery. She had been given to her husband when she was 12, as payment to settle a dispute – a practice in Afghanistan that goes by the fitting name of "baad".

Having endured six years of torment and abuse, she escaped to the only place she could go, back to her family home. It was here that the Talibanarrived one night and demanded that the girl be handed over to face justice. She was taken away to a mountain clearing, where the local Taliban commander issued his verdict. She was then held down by her brother-in-law, while her husband first sliced off her ears and then cut off her nose. Aisha passed out from the pain but soon awoke choking on her blood, abandoned by her torturers and the ad-hoc judiciary of the Taliban.

According to Time, the Taliban commander who awarded the punishment, later said that Aisha had to be made an example "lest other girls in the village try to do the same thing".

With the help of the American military, aid workers took her to a women's refuge in Kabul run by an Afghan-American organisation, Women for Afghan Women (WAW). There she remained, under the care of trained social workers, until August of this year, at around the time the Timecover appeared.

She was then flown to California to undergo reconstructive surgery at the Grossman Burn Centre in California. However, following psychological assessment, the medical staff at the foundation decided that Aisha required more counselling and therapy before she could give her informed consent to the gruelling series of operations that surgery would entail.

So last month she was moved to New York, where she remains under the care and supervision of WAW. "In Kabul she had been doing very well with us," says Esther Hyneman of WAW. "She had been with us for nine months. When she got to California, she regressed somewhat. We think it was because she really missed the friends she had made in the women's shelter in Kabul. It was also a big culture shock, and there was some problem getting her situated." WAW has indefinitely postponed the surgery. "She is now comfortable with her appearance," says Hyneman. "She doesn't hide herself any longer. And she has a prosthesis that they made at Grossman Burn. It's really a work of art. We encourage her to wear it, but she doesn't always put it on."

WAW now thinks that her best chance of adapting to her current life in America is through education. "She has never been to school," says Hyneman, "and lacks basic common knowledge. For example, I bought her a map of the world and she had no idea where she was. She couldn't find Afghanistan or Pakistan either. But the point I want to stress is that she's an amazingly intelligent person."

She's being taught English and maths, and some other basics, but Hyneman says that she already displays a kind of instinctive gift for using a computer. The one problem this presents is that she's inclined to search for sites with photographs of the Taliban, says Hyneman. "And when she sees them, she goes crazy, screaming and crying about what the Taliban did to her and what they do to women. So we try to discourage her from doing this."

In an obvious sense Aisha's story conforms to a traditional feminist reading of the struggle of women against patriarchal society. Consigned to the status of a domestic slave, she rebelled and felt the brutal force of male-dominated tribal society. And there is no doubt that this is the context in which this vicious crime against a teenage girl took place.

However, it's not the only context, and for many critics of the Time cover, it's not the most significant context. Because, of course, Afghanistan plays host to tens of thousands of foreign troops, most of them American, and as such any efforts to remove the troops are seen by critics of the occupation as all part of a legitimate anti-imperialist cause. From this perspective, to put it crudely, national liberation always trumps female emancipation.

Writing on the Guardian's website Priyamvada Gopal, who teaches English at Cambridge University, viewed the Time cover in terms of a "cynical ploy" to justify the occupation. "Misogynist violence is unacceptable," argued Gopal, "but we must also be concerned by the continued insistence that the complexities of war, occupation and reality itself can be reduced to bedtime stories."

Hyneman certainly agrees that it's wrong to focus on Aisha's case, "as if she's the only woman who's suffered this treatment. People need to realise that she represents those women who are already dead, or under threat of attack or face being stoned to death."

For Gopal, though, these issues are simply handy levers for empty western moralising. She concluded that America has nothing to offer Afghanistan except more war and "bikini waxes".

The notion, fashionable in radical circles, that Afghan women are better off without American protection or influence is one that Hyneman is particularly keen to contest.

"Contrary to what most people in the developed world seem to believe, progress for women has occurred in Afghanistan, and against overwhelming odds."

There are indeed several achievements that cannot be easily disregarded. Under the Taliban girls were not allowed to go to school after the age of eight. Now there are more girls attending school in Afghanistan than at any time in its history. Under the Taliban, women's voices were banned from radio (TV was completely forbidden) and now they take up a leading role in the broadcast media. Before, sports were off-limits to women, now there are female athletes competing in international events. Adultery was punishable by being stoned to death, and women were beaten on the street for anything short of total enshrouding. Now, while the informal dress code remains restrictive, 25% of parliamentary seats are allocated to women.

The picture is far from perfect, and there are powerful forces within a weak and corrupt government that still wish to turn back the clock. There is currently an attempt under way to close down women's refuges because religious conservatives, without any evidence, have accused them of operating as brothels.

WAW has five women's refuges throughout the country – and plans to open three more – as well as five family centres where men, who may be a threat to their wives, can receive counselling. And it is also active in seeking protection and compensation through the courts. Hyneman believes that if the Taliban regains control not only will all these benefits be lost, but there will also be a bloodbath against women.

"The fundamental problem," she says, "is that the Taliban's subjugation of women is a political strategy. Get 50% of the population on its knees and you can control the country. It's also their military strategy. They're the ones who are using women for military and political gain."

What, though, of Aisha? Where does she go now? Her mother died when she was very young, and according to Hyneman, she "does not have loving thoughts" about her father, who gave her up in the first place. She also has a younger sister, says Hyneman, who WAW believe may soon be turned over to the same family that mutilated Aisha as part of the outstanding blood-money debt.

No amount of foreign troops can change the status of Afghan women. An enormous amount of work must be done to shift culturally and religiously sanctioned codes of behaviour, and then to raise life expectations. But it's hard to imagine that such efforts could be waged without the protection of the Nato troops. Even then, many Afghan women may still see security in tradition, no matter how unkind it has been to them.

In 2002 National Geographic tracked down the girl with the green eyes. They found her living near the mountains of Tora Bora, which had been targeted by American bombing to flush out al-Qaida and Taliban fighters. Her name was Sharbat Gula. She had lived a life almost permanently disrupted by war and dreamed of her daughters one day attending school. But Gula also said that "life under the Taliban was better. At least there was peace and order".

The Taliban, who have minimal support in Afghanistan, understand the deep yearning for peace in the country after decades of fighting. That's why they are prepared to commit the most monstrous violence, particularly against women, to force the Afghans to submit to their order. Human Rights Watch has collected letters sent by the Taliban to intimidate and terrorise women. One reads: "We warn you to leave your job as a teacher as soon as possible otherwise we will cut the heads off your children and we shall set fire to your daughter." Another threatens such a harsh form of death "that no woman has so far been killed in that manner".

Anyone who is serious about challenging misogyny in Afghanistan is required, at the very minimum, to acknowledge this depressing reality. Equally, regardless of whether the troops stay or are withdrawn, it's important, if only for the sake of honest debate, to state clearly what's at stake. Aisha's experience is not the whole story, but it does symbolise a critical subplot that ought not be neglected. That much, at least, is as plain as the nose that is missing from her face.

If you would like to make a donation to the Women for Afghan Women/Bibi Aisha Trust Fund go to womenforafghanwomen.org/front_lines.php