For the love of her school: ‘I told school attackers to burn me first’ 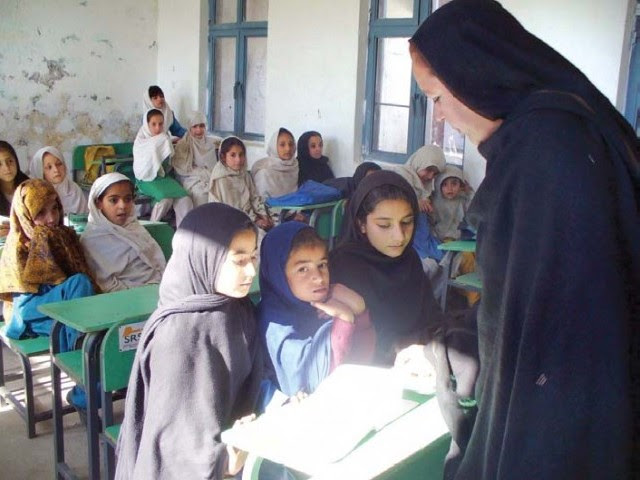 Gul-e-Khandana, who hails from Matta tehsil, is the headmistress of a primary school for girls in Sijban, Matta. “I have intense love for this school. Where I now teach, I studied as a young girl in primary school,” she tells The Express Tribune.

She is the first woman from her family who chose to work outside the house, despite family pressure. “My family did oppose me but I resisted them because I wanted the girls of my village to be educated. For the first two years, I taught without a salary,” she said.

Education and literacy have never fared very well in Swat and when the militants intensified their hold in the region, education suffered the most. While most residents took fright, Gul-e-Khandana refused to. “When the militants started bombing schools, I feared for my school. I decided to transfer the record and furniture of my school to my home,” Gul-e-Khandana recalls.

The situation only seemed to worsen as the government gradually lost its control, she said. “The militants banned education for girls and blew up the schools where they could study,” she said.

As expected, her school was also on the list of schools to beattacked. “When they came to attack my school, I ran to it frantically. As they prepared to torch it, I blocked their way and told them to burn me first,” she says. “With Allah’s blessing, they retreated and my school was safe.”

The militants then launched personal attacks on Gul-e-Khandana and her family. “They called us infidels and came to our home to take away the school’s furniture and records. My children, our whole family were petrified but I did not lose heart and refused to let them even touch it.”

Gradually, as militancy took root in Swat and it became impossible for people to live in Swat, Gul-e-Khandana and his family moved to Mardan. “I was heartbroken. All I could think about was my school, the alma mater of the girls of our village,” she said.

The family returned only after the army declared that Swat valley had been cleared of militants. “You will not believe it but I walked all the way from Mingora to Sijban, immediately after peace was restored in the valley,” Gul-e-Khandana says. “Security forces had not yet allowed people to enter Matta and they apprehended me too, but I went running to the school before even going home.”

It was the happiest moment of Gul-e-Khandana’s life when she saw that her schools building was intact. “I felt pure joy and happiness when I saw that my school’s building, although partially-damaged, was still standing,” she says. “Since that day, I began working for the school. The army, Unicef and Sarhad Rural Support Programme contributed towards repairing the building and restoring water supply. They also provided furniture for students and teachers.” Gul-e-Khandana also admitted girls from a nearby middle school, which had been torched.

She now lives peacefully in Matta with her husband and five children. “My only wish is that the women from this region receive good education and are able to stand on their feet so that they can also work towards a better future for our homeland,” Gul-e-Khandana says.