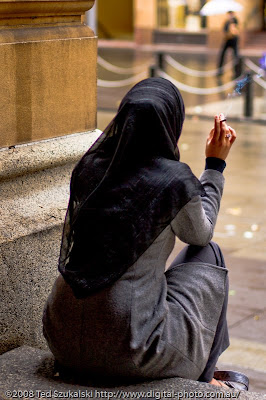 A fatwa by Indonesia's top Islamic body banning smoking in public places is dividing the world's most populous Muslim state amid a conflict of interests between health and business.

"We will submit the fatwa to the Supreme Court as a basis of upgrading it to become apart of additive essence," Aries Merdeka Sirait, secretary general the National Human Rights for Children Protection, told IslamOnline.net on Saturday, January 31.

He said if the court considered tobacco an additive essence, then smoking will be banned in the Muslim country.

"So, the fatwa would be in effect not only for children and pregnant women," said Aries.

Nearly 700 scholars of the Ulemas Council on Sunday, January 25, banned smoking in public places and for children and pregnant women.

The scholars, however, failed to agree an outright ban on smoking, fearing it could harm the country's economy.

The fatwa is not legally binding for Muslims, who make up some 86.1 percent of Indonesia's 235 million population, but can influence government policy.

"I am happy and glad about the fatwa," Health Minister Siti Fadilah Supari said.

When asked about the impact of the fatwa on the country's tobacco industry, Supari said the issue is beyond her authority.

"That is not the concern of the health minister, but rather the trade and industry minister."

Indonesia is the world's third biggest cigarette consumers after China and India.

At around $1 a pack, cigarettes in Indonesia are among the cheapest in the world.

More than 60 million Indonesians are active-smokers.

Smoking is Haram regardless of what some people say or try and justify it. I have earlier posted articles about Egyptian Mufti declaring it Haram.

There are many instances where the Qur'an gives us general guidelines, and calls upon us to use our reason and intelligence, and seek guidance from Allah about what is right and wrong. In the Qur'an, Allah says, ...he [the Prophet] commands them what is just, and forbids them what is evil; he allows them as lawful what is good, and prohibits them from what is bad..." (Surah al-Araf 7:157).

Allah says, "...make not your own hands contribute to your destruction..." (Surah al-Baqarah 2:195); "...nor kill yourselves..." (Surah al-Nisaa 4:29). It is universally understood that cigarette smoking causes a
number of health problems that often ultimately result in death. Men who smoke contract lung cancer at 22 times the rate of non-smokers. Smokers are also highly at risk for heart disease, emphysema, oral cancer, stroke, etc. There are hundreds of poisonous and toxic ingredients in the cigarette itself that the smoker inhales straight into the lungs. In an authentic hadith, the Prophet Muhammad (peace be upon him) said that "Whomsoever drinks poison, thereby killing himself, will sip this poison forever and ever in the fire of Jahannum (Hell)." Over 3 million people worldwide die from smoking-related causes each year.

In the Qur'an, Allah says: "Those who annoy believing men and women undeservedly bear on themselves a glaring sin" (Surat al-Ahzaab 33:58). And the Prophet (peace be upon him) said that "there should be neither harming, nor reciprocating harm. In another hadith, the Prophet (peace be upon him) said: "Anyone who believes in Allah and the Last Day should not hurt his neighbor." Those around the smoker inhale what is known as "second-hand smoke" - the unfiltered, poisonous waste that goes in the air around the smoker. There are over 4,000 chemicals in cigarette smoke, over 40 of which are known to cause cancer. Second-hand smoke causes or aggravates asthma, bronchitis, and other respiratory problems, especially in children.

Allah says, "...But spend not wastefully (your wealth) in the manner of a spendthrift. Verily spendthrifts are brothers of the devils... {Surah al-Israa 17:26-27} And in an authentic hadith the Prophet (peace be upon him) said that: "Allah hates for you three things: gossiping, begging, and wasting money." In the U.S. and other countries, cigarettes are taxed heavily in order to discourage this habit and reimburse the government for the overwhelming health care costs to care for those afflicted with diseases caused by smoking. Smokers often spend thousands of dollars a year that literally just go up in smoke.

More info can be obtained here.