A for Apache, B for Blood, C for Coffins, D for Destruction 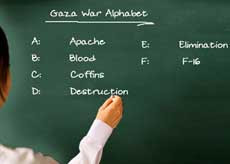 GAZA CITY — "A for Apache, B for Blood," little Shaimaa wrote in her colorful school notebook.
It was not a school assignment, but the new alphabet children in the bombed-out Gaza Strip are coming to terms with.

"A for apple and B for ball do not work any more, not in the time of war," said the 10-year-old elementary student.

In the notebook, Shaimaa puts a complete alphabet collection, all derived from the deadly offensive which killed more than 1,350 people, including 437 children, and wounded 5,450 others.

"C for Coffins, D for Destruction."

Insisting that her collection is more relevant to the vocabulary her schoolmates use in their every day life, Shaimaa says her alphabet should be incorporated into the school curriculum.

Many Gaza children, just like Shaimaa, are developing a new vocabulary based on the atrocities they witnessed during the 22-day Israeli onslaught.

Amal Yunis, a teacher, did not see Shaimaa's alphabet collection, but says many in her kindergarten class are already using the very same words. She recalls when she entered her class holding pictures of apples, flowers and rabbits, hoping that the bright colorful photos will cheer the kids."Kids, who knows a word that starts with 'F'?" Yunis asked.

"I know, Miss," young Amgad immediately answered. "It's 'F-16'." The teacher tried in vain to convince him that the right answer was "Flower". To her surprise, the other options put forward by the other kids were: Fear, Flee, Fire.

Across Gaza, war-scarred children are speaking a new language that reflect the horrific experience of 22 days of air, sea and land attacks.
"War, bombardment and death are all what they talk about," Om Faras says about her kids.

Her three-year-old son, Faras, shakes so badly and screams in fear whenever he hears any loud voice outside their home.

"He instantly starts to cry 'mom, bombs'."
Alaa Al-Shawwa, 6, does not believe any of the bedtime stories her parents tell her.

"No mom. The girl in the red dress was not eaten by the wolf. She was killed by the Israelis," she rebuffed her mother.

"The children's new vocabulary mirrors the horrors they endured for weeks," Fadl Abu Hayen, director of the Center for Social Rehabilitation and Crisis Management, told IOL.

He said many children have been traumatized for life by the Israeli aggressions that hijacked their innocence.
"They forgot all about joy, fun and peace. They only talk about war, blood and death."

Via: Islam Online
Posted by Zafar Khan at 12:43