Patriarchy, give me my country back 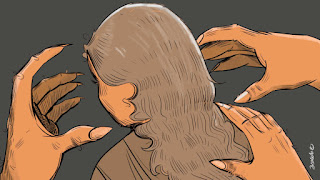 I was four years old when it first happened. A middle-aged man, who ran a small departmental store in the Dhaka neighbourhood I lived in, was babysitting me while my mother went out to fetch some notes from her university. It was difficult raising a child all on her own, and my single mother was grateful that she could leave me in safe company.

I was sitting cross-legged on the floor opposite my babysitter when he pulled me close to his body and put his tongue down my mouth. At first, I was fascinated—I had seen adults kiss each other in tv shows and films. Children, at that age, are curious about the liberties that adulthood offers. But soon after, a dirty feeling came over me. My mouth froze. He attempted to force his tongue on me a few more times before I pulled away and rushed to the bathroom. I had a rabid compulsion to clean my mouth; I brushed my teeth, again and again, hoping to remove his traces so that my mother would never know, and I could pretend it never happened.

For all latest news, follow The Daily Star's Google News channel.
Two years later, a security guard at the apartment complex we shared with my aunt groped my chest and motioned that he would put his "thing" inside me. I thought I should stay quiet, because I was ashamed, but the constant touch from him and the resulting pain became so unbearable that I rushed to my mother as she was boarding a rickshaw to go to the supermarket. "He's hurting me," I told her. She looked at me in surprise. Hurting? How? Where? I eventually revealed all the details to her, and he was dismissed shortly after.

I used to be a very talkative child, but with every experience of physical violation, I grew quieter, more watchful of my words, more concerned about what I could talk about to anyone.

When I was seven, I realised that my parents had separated because my father would physically abuse my mother, the floor frequently turning bloody.

When I was eight, a law enforcement officer asked my mother to sleep with him. She refused and was sanctioned.

When I was nine, a male relative lay down beside me while I was resting and put his arms around my waist. He turned me around, and there it was, again, a foreign tongue inside my mouth, unwelcome, unwanted. I flinched and immediately left the room.

When I was eleven, construction workers next door would make untoward gestures every time I went to the veranda, and I eventually completely stopped going outside.

When I was 13, I was severely bullied about my weight and the lack of feminine curves—disparaged for not meeting societal beauty standards.

When I was 14, a teenage crush of mine spread stories about being physically intimate with me, and my classmates hurled numerous insults my way while somehow, in their eyes, he was now "cooler."

When I was 15, my friend's boyfriend locked the room behind us and attempted to pinch my private parts, but I immediately unlocked the door and left the room.

When I was 16, my male cousin confessed that his peers could not see their female counterparts as anything more than sex objects.

When I was 17, a man older than my father proposed a sexual relationship with me in exchange for expensive gifts and financial security.

When I was 18, my school's principal, upon my insistence on wearing shorts while playing sports, gawked at me and said, "What will I do if one of the security guards rapes you?"

When I was 19, I left Bangladesh, and I have not returned since.

Begum Rokeya, the prominent feminist thinker and social reformer, once dreamt of a world led by women in her famous short story "Sultana's Dream." Kazi Nazrul Islam, the national poet of Bangladesh, wrote, "I sing the song of equality; in my view, there is no disparity between man and woman." Why, then, according to Bangladesh Mahila Parishad, were there 2,711 incidents of violence against women and children, including rape, between January and October in 2020?

Why, according to a 2015 survey by the Bangladesh Bureau of Statistics (BBS) and the United Nations Population Fund (UNFPA), did more than 70 percent of married women or girls face intimate partner abuse, including physical violence? Why indeed, according to Ain o Salish Kendra (ASK), were at least 235 women murdered by their husbands or members of his family in the first nine months of 2020? How, in the country of Begum Rokeya, Kazi Nazrul Islam, Raja Ram Mohan Roy and Sufia Kamal, can rape be justified because of what a woman is wearing?

The consequences of patriarchy are a pervasive reality in Bangladesh. According to a 2018 study by Brac, 94 percent of Bangladeshi women report being sexually harassed while commuting via public transport. Poor women, including those from rural areas, face multiple forms of oppression, including lack of access to quality education and unpaid productive work. Women from religious minorities continue to be persecuted for their beliefs. As part of a community facing landlessness issues and a lack of civil rights, non-Bengali indigenous women in particular face further challenges at the intersection of indigeneity, gender, and food insecurity. Gender-variant people are not spared from these challenges either: hijra people are marginalised in social and economic spheres. In 2015, they were denied government jobs because they "failed" a genitalia-based medical examination.

Despite my personal experiences and the grim statistics on gendered oppression in Bangladesh, I have begun to speak up. I am fortunate to have had the opportunities to study around the world and grow as a person, but I still feel the wound of being a second-class citizen in my own country. I want to reclaim my home. I ask the women reading this article, what about you?